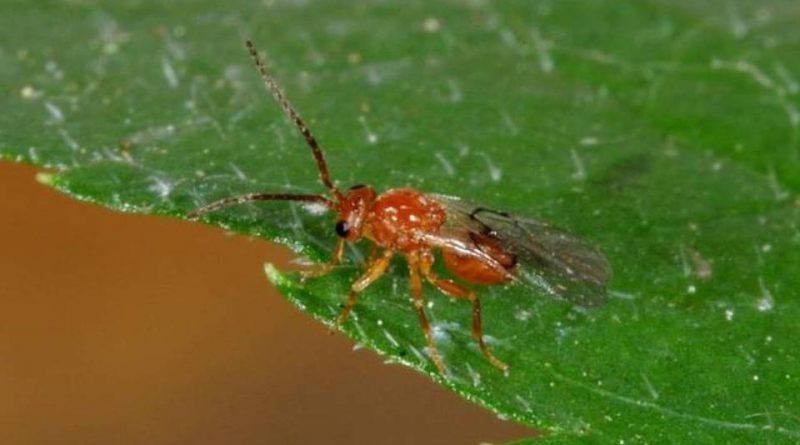 Geographical Distribution and Habitat –
The Biorhiza pallida is a small wasp whose diffusion is in Europe where it lives on oaks such as Quercus robur and Quercus petraea. 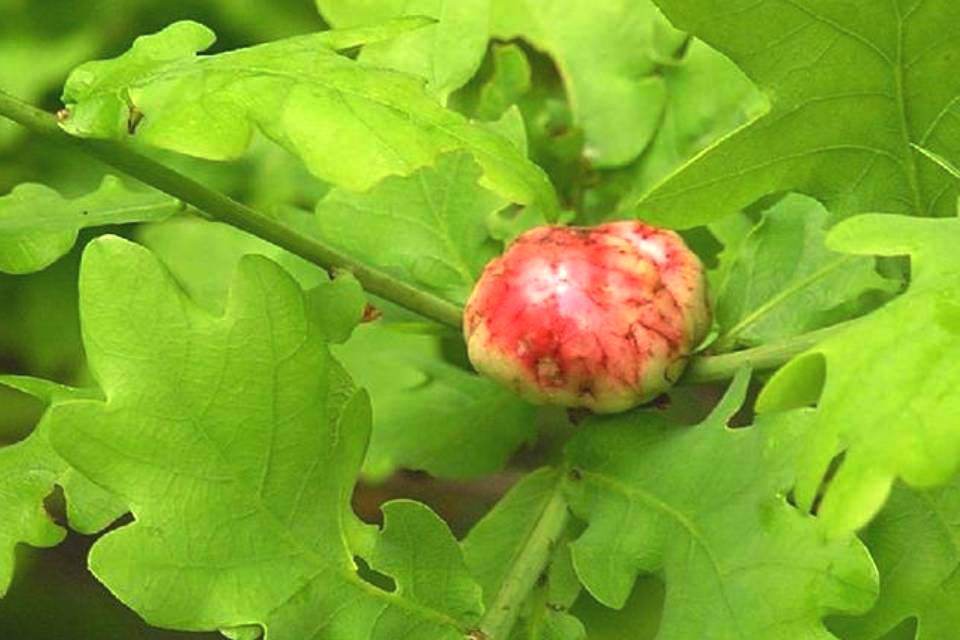 Morphology –
The generation of Biorhiza pallida, which reproduces by agamic way, is wingless and has a length between 4.8 and 6.3 millimeters.
The head is golden brown with medium brown eyes and orange ocelli (simple eyes).
The long antennae have fifteen segments and are brown-orange in color.
The thorax, legs and bulb and abdomen are yellowish-brown in color.
The insects, both male and female, which develop in the summer generation, are smaller with a length between 2 and 3.5 mm.
They have golden brown and translucent head, thorax and abdomen.
The wings are light and have dark veins and light brown hairs.
The eyes are large and dark in the case of the female and pale in the male.
The other main difference between the sexes is the terminal part of the abdomen which is deep and narrow in the male and wide and with the tip of an ovipositor in the female.

Aptitude and biological cycle –
Biorhiza pallida has a complex life cycle that includes females by agamic route following parthenogenesis, and therefore without the intervention of the male, during the summer and a winter – spring generation in which the individuals are male or female. These mate and produce fertilized eggs.
The generation derived from the winter brooding of agamic females moves to the oak trunks such as: Quercus robur and Quercus petraea, in the spring period.
Here they lay groups of eggs in the young shoots, injecting at the same time a substance that makes the leaf tissues swell and soften. The eggs hatch and the larvae secrete further substances that promote the growth of galls, both on the aerial and on the root system. Spongy galls, more or less spherical with a diameter of about 3-5 cm, are produced on the aerial apparatus (on the apical or lateral buds). The section of the galls highlights, inside them, a subdivision into compartments, each occupied by a whitish larva. On the root system it produces wood galls, more or less the same size.
The substance injected by the insect provides a nourishing and protective environment and there can be up to thirty larvae that develop inside. Males and females emerge from several galls after two or three months.
After mating, the females go down to the ground where they make their way into the ground and lay their eggs individually inside the oak roots.
Here the other galls appear; after wintering like larvae, another generation of wingless agamic females emerge and move onto the trunks.

Ecological role –
The galls caused by the Biorhiza pallida, inside the oak tissues, in addition to providing food and protection to the wasp larvae, protect several species of wasps, including Synergus gallaepomiformis and Synergus umbraculus. These share the tissues that provide food for their larvae.
In addition, about twenty other species of wasps are hyperparasites and live inside the galls parasitizing their rightful owners, that is, the larvae of Biorhiza pallida.
In general, no control intervention is carried out both for their low danger and for the technical difficulties of carrying out the interventions, considering the type of host plants.