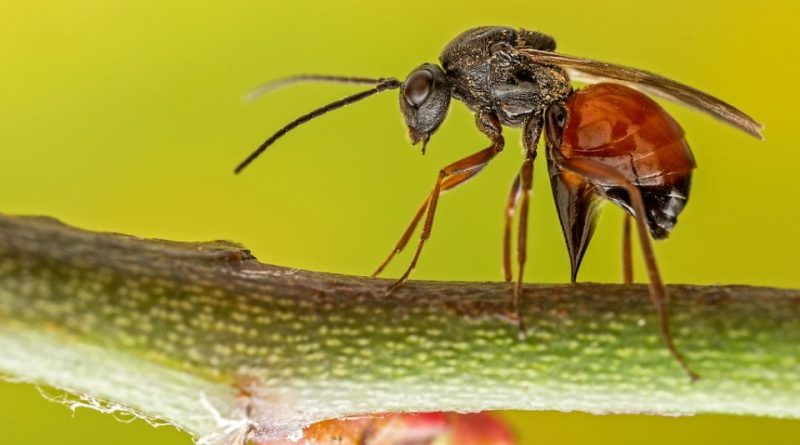 Morphology –
The Rose bedeguar gall is a small insect of a few mm in length, specific to the Rose where it produces, at the level of the twigs, small woody galls (of a few cm in diameter) welded together that surround the woody organs, all covered with long and twisted reddish-green filaments, causing the formation of a showy, slightly curly, “curly” musky mass that stands out on the vegetation.
A large float can have a maximum width of 10 cm.
The larvae develop and then overwinter as pupae in the surface and emerge in the period of May.
The female is about 4 mm long.
Parts of the abdomen and legs are yellow-red, while the rest of the body is black. The ovipositor, which represents the organ with which the females of the species lay their eggs, is placed near the last abdominal segment, morphologically it is elongated, thin and perforating, defined in the terebra cinipids, hence the name of the category to which the cynipids belong, despite the Hymenoptera.
The male, which is very rare, has a body length of about 3 mm, is black in color and lacks the structure of the oviposition which further differentiates it from the female. The legs are two-tone yellow. 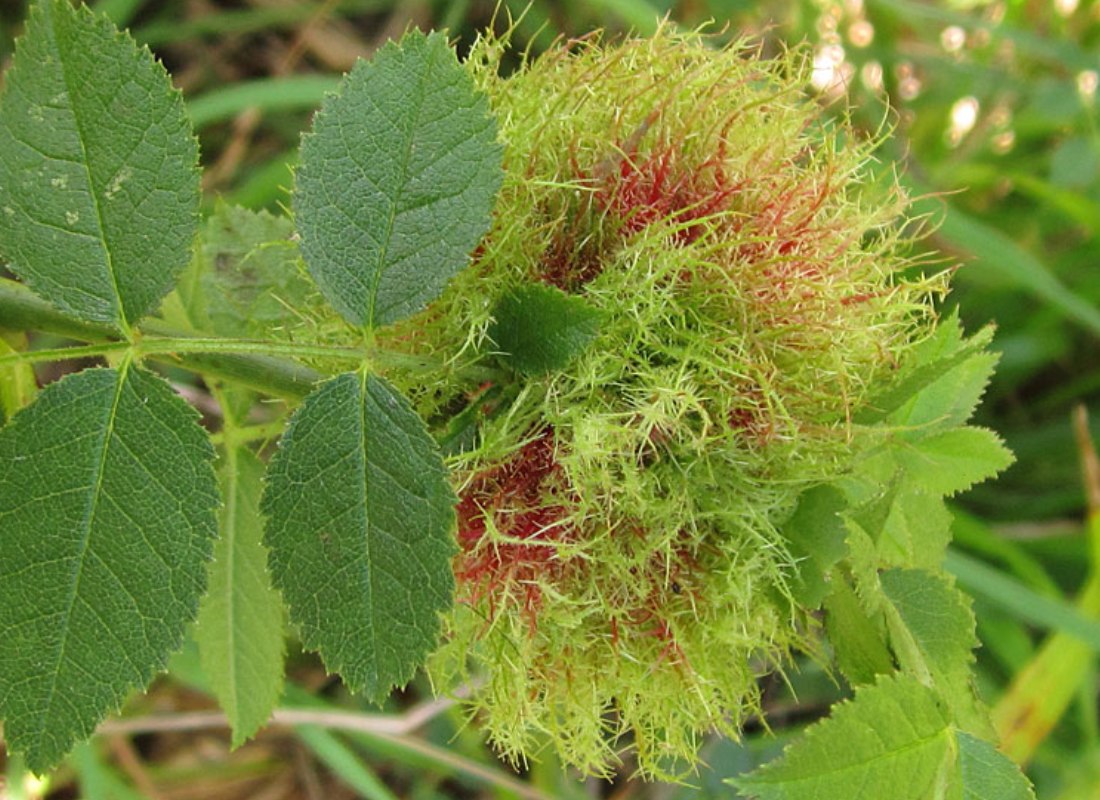 Aptitude and biological cycle –
A week after the egg has been laid, the larva hatches and begins to feed on the tissue of the leaf buds. This activity stimulates (in a way still to be understood) the development by the host plant of “nutritive” cells enlarged in the area around the growing larva.
The puncture of oviposition causes, at the level of the twigs, the formation of a showy musky, curled, semi-rounded mass, which stands out on the vegetation, which is precisely the surface. The galls are caused by a substance released by females, a substance that was once used also for pharmaceutical purposes in folk medicine.
The float is like a wooden case, an incubator of a few cm in diameter, inside which the eggs of the cinipid are contained, usually it is a single egg, some species such as precisely for the Diplolepis rosae contain more individuals.
In this case, the gall inside it appears to be divided, divided into several cells, each of which containing its own egg.
Subsequently, always inside the gall, it is the larva, which by hatching, will take the place of the egg and itself acting as a source of nourishment and protection.
The internal part of the surface is plant tissue, of which the phytophagous larva of cinipid is particularly greedy.
The larva completes its entire biological cycle in the surface, from which it emerges at the flickering phase.
In order to flicker, the tenants who have so far inhabited the surface, dig a tunnel, making an exit hole that remains open.
The float which at this point is uninhabited, acts as a home for other insects such as spiders or other hymenoptera, which exploit the hole made by the cinipid to make the float the shelter of their nests.
Reproduction of the cinipid occurs only by parthenogenesis.
Parthenogenesis is the ability that some animals but also plants have to reproduce without the egg being fertilized.
From this mode of reproduction only females descend, responsible for the damage, some species, however, manage to alternate the reproduction, that is, they alternate a bisexual reproduction (male and female individual) to a parthenogenetic one.
The individuals of the bisexual generations are morphologically and biologically different from each other.
For a cinipid to complete its biological cycle, the presence of a host plant is fundamental, in the case of Diplolepis rosae it is precisely the rose.
Diplolepis rosae is a monovoltine species.

Ecological role –
As mentioned, the males of the Diplolepis rosae are very rare.
One possible reason for this scarcity is the presence of a bacterium of the genus Wolbachia, which is endosymbiotic in the gametes of females.
Females infected with this bacterium produce only diploid eggs which leads to an entirely female lineage.
Evidence of this factor has been supported by females treated with antibiotics, who are subsequently able to produce normal male and female eggs.
The galleys, however, also play a secondary ecological role.
In fact, the galls, as mentioned, act as a home for other insects such as spiders or other hymenoptera.
In addition, sometimes the mature galls are opened by predators to retrieve the larvae or pupae. The large size of the emergency holes suggest that predation by birds or small mammals also occurred.
In this way, very complex ecological connections are being established and that the reckless use of insecticides is causing serious difficulties.
Among other things, galls occur most commonly on plants under stress, i.e. in conditions of very dry climate, clogging or cutting the hedge; in fact vigorous growing plants have a much smaller number of galls.
The fight against Diplolepis rosae is almost always unjustified and should never be conducted with the use of insecticides.
One of the operations that can be done is the removal and destruction of the galls before they dry out and the small insects emerge.
The Rose bedeguar gall, in any case, is an insect that is not of particular concern; its damage is negligible, also because its presence is so sporadic and the damage so unimportant, as to determine a little practical interest for this damage agent, for which the fight is never applied.