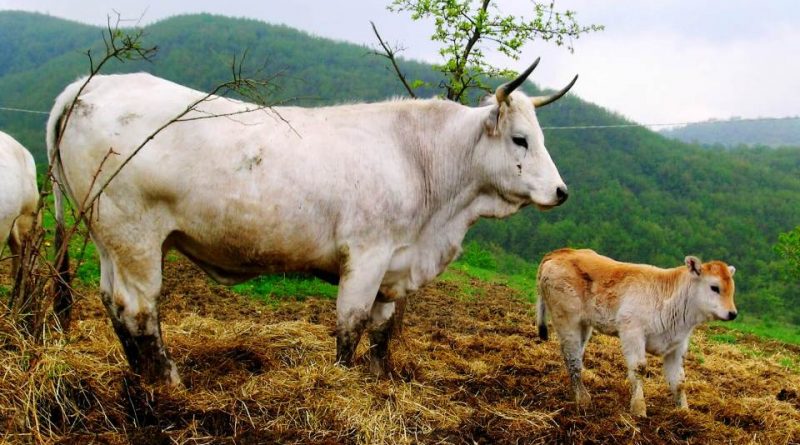 The Romagnola (Bos taurus macroceros Linnaeus, 1758) is a typical breed of cattle from Romagna that today is exclusively bred for the production of meat.

Geographical and Area Distribution –
Romagnola has its center of breeding especially in Romagna (Forlì, Pesaro) but has also been bred in some areas of the provinces of Rovigo, Padua, Venice and Verona.

Origins and History –
The Romagnola breed boasts ancient origins, and derives from the Bos taurus macroceros “aurochs with large horns”, a bovine from the steppes of central-eastern Europe, in the Podolia region of Ukraine.
The theories about its origins are different but can be linked to three theses:
– the first is the “barbaric” theory; this theory, of nineteenth-century origin, hypothesizes the arrival in Italy of these cattle through invasions or migrations of foreign populations, mainly of Germanic or Hun lineage. The point of disagreement of the scholars is related to which people may have introduced the Podolian cattle: many authors point to the Huns of Attila, a hypothesis debated by the fact that they had made only a fleeting appearance in Italy. According to Ludwig Ruetimeyer, father of Archeozoology, cattle instead arrived in Italy in the 6th century following the Lombards led by Agilulfo, who settled there permanently. The Lombards in fact, precisely because of the stable nature of their migration, would have brought all their belongings, including the herds. According to other authors, it was introduced by the Aryans during migrations from Asia on several occasions.
– The second theory, namely the Mediterranean one, supported by recent genetic discoveries, hypothesizes the presence of Podolian cattle in the Mediterranean basin as early as the Neolithic, and their subsequent introduction into the Italian peninsula, by the Phoenicians or Carthaginians.
– The third theory is the autochthonous one; according to some scholars, these cattle are believed to originate in peninsular Italy, identifying them with the long-horned cattle depicted in Etruscan paintings and sculptures. According to this theory, the breed would have been exported by the Romans to the rest of the Italian peninsula and to the areas conquered by them.
Anyway, the Romagnola, among the Italian White breeds, preserves, more with the Maremma, the characteristics of the Podolico strain.
The National Association of Italian Cattle Breeders A.N.A.B.I.C. since 1966 he has been managing the genealogical books of the Italian white breeds (Chianina, Romagnola, Marchigiana, Maremmana, Podolica).

Morphology –
The Romagnola breed is characterized by animals of imposing appearance, massive, collected and harmonious.
These have a small and short head, large and expressive eyes and remarkable dewlap.
The coat is fromentino color at birth, light gray or slightly graying in adult females, darker in the bull and presence of black hair in the front train and on the thighs.
In males there is often eyewear, i.e. the presence of black hair around the eyes.
The mucous membranes and the skin are black pigmented.
These cattle have long horns, black in tip, lyre-shaped in the female, half-moon in the male.
In fact, it has short limbs with respect to the thoracic depth and is smaller compared to the Chianina and Marchigiana breed, despite having the same weights.
In fact, the stature varies from 1.45 to 1.55 m in females, for a weight of 7-8 quintals and 1.55-1.70 m in bulls, for a weight of 12-14 quintals.
In young people, the average growth is 1 kg per day.
The limbs are very robust, with hard and well shaped claws.

Productive attitude –
The Romagnola breed was originally used for work purposes, which in the strong and tenacious lands of Romagna required particular physical attributes, of a nature present in this breed, as a well-developed front, solid structure, short and robust limbs.
Today it is selected and raised only for meat, while milk production tends to be poor for veal.
This choice was due to the evolution of agricultural techniques and the progressive mechanization, which contributed to directing the selection of cattle towards the production of meat. Thanks to the morphological and functional characteristics of specialized breed for the production of meat, together with the dynamic and working past that guarantee a great robustness, the Romagnola has been noticed by numerous foreign breeders.
Among other things, it has excellent adaptability to grazing in different conditions because it is an excellent user of forages and resistant.
The meat is of excellent quality with the right marbling and tender.
Slaughter yields are: 58-63% in calves, 55-60% in fattened cows and oxen. The proven quality of its meats, which from an organoleptic point of view are excellent, places the Romagnola in the category of the best beef cattle breeds in existence.