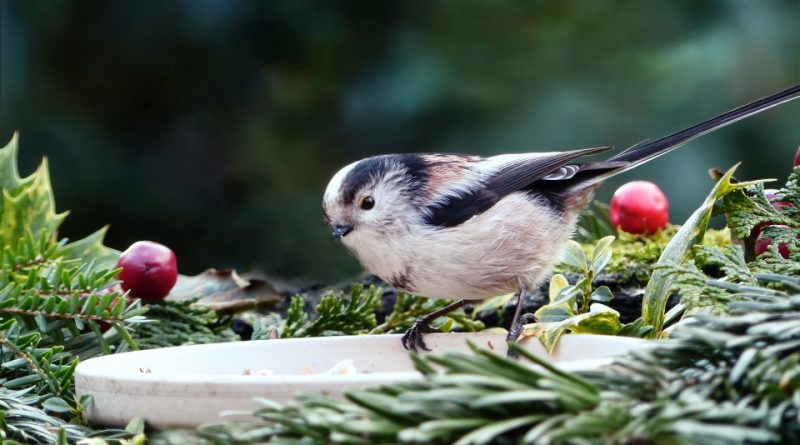 The Long-tailed Tit (Aegithalos caudatus (Linnaeus, 1758)) is a passerine bird belonging to the Aegithalidae family.

Geographical Distribution and Habitat –
The Long-tailed tit is a passerine bird of Eurasian origin and widespread in Europe. Its range is somewhat broad and includes a large part of temperate Eurasia embracing the whole of continental Europe (including the British Isles, while missing from the internal areas of Fennoscandia), the coastal areas of the Anatolian peninsula, Crimea, the Caucasus, Siberia, Manchuria, Kamčatka, the Japanese islands and Korea.
In Italy it is present throughout the territory with three subspecies (four considering the entire Italian geographic region) but is missing in Sardinia, Salento and central and southern Sicily. Instead, it is found in the Alps, especially in the valley floor, along rivers and streams, and in well-structured woods with bushy undergrowth.
At higher altitudes it becomes rarer until it is no longer found above 2,000 meters above sea level.
The habitat of the long-tailed tit is represented by wooded areas with presence for secondary growth areas or in any case those with thick bushy undergrowth: during the summer months, also by virtue of reproductive habits, these birds prefer the Mediterranean scrub and the bushy areas with the presence of isolated trees, while during the winter they move in the deciduous forests with a majority of oaks, willows, maples and ash trees. 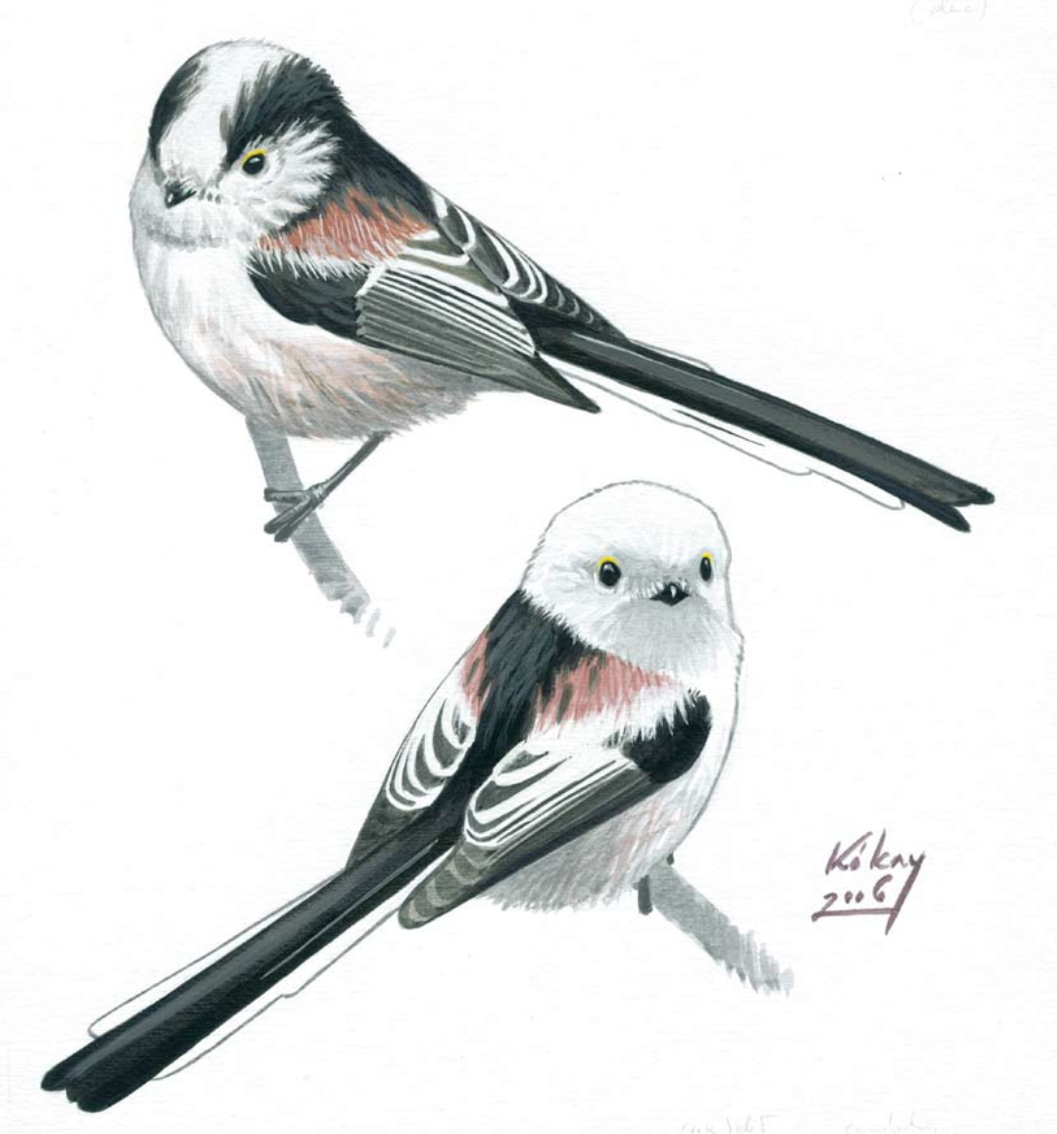 Description –
Aegithalos caudatus is a bird with a head-tail length of 14-16 centimeters and a tail 7-10 cm long. Sexual dimorphism is negligible, with the two similar sexes.
It has a wingspan of 16-19 cm, for a weight of 6-10 grams.
The appearance of these birds is plump and rounded, with a large rounded head with a short conical beak with an upper jaw slightly curved downwards, short but pointed wings and a tail almost as long as the body and wedge-shaped end.
The color of the feathers is whitish on both head and chest, while the back and wings are brown (the latter, however, have black remiges with a white base); the tail is black in color with the feathers on both sides white and the sides are pink or reddish: there is a rather wide variability among the various populations, with some (especially the more northern ones) almost completely white on the head and ventral area others that have more or less marked black caps or eyebrows, and still others that show various shades of gray on the belly and hips.
The beak is blackish in color, while the legs are flesh-brown in color and the eyes are dark brown in color.
It moves with short flights, from bush to bush, inspecting every leaf, every piece of bark, looking for insects with which it feeds.
Long-tailed tongues can also be recognized because they are very vocal birds, which during their movements keep in almost constant vocal contact with a high and trisyllabic sibilant srih-srih-srih, which becomes louder and faster when a specimen is isolated or found covering stretches of open ground.

Biology –
The biological cycle of this bird begins with the nesting that normally takes place in the months between March and May, when it lays from 6 to 12 pinkish-white eggs with orange-rust punctuation.
The nest, in the shape of a sack with an opening placed above, is mainly built on elder bushes, hazel or among the brambles, less than three meters above the ground, using for the purpose lichens held together with cobwebs; the interior is lined with feathers.
The brooding period lasts about two weeks, at the end of which hatch and blind chickens hatch. The nestlings are fed by both parents, to which are added other individuals (generally related to the father of the offspring) who have not found a partner or to whom the brood has failed (the latter not infrequent case, since only 17% of couples manages to successfully carry on a brood during a breeding season).
The reason for this aid is due to the fact that helpers can indirectly benefit from the help given to relatives in order to (at least partially) carry on their genome, as well as being able to have access to new territories and new potential companions and, factor not negligible, to gain experience in view of any future broods.
Young individuals are able to fly around twenty days of life. After fledging, they continue to be fed, although increasingly sporadically, for about three weeks: in general they (especially the males) remain for months in their native territory, dispersing only after the following breeding season.
Normally there is one brood per year, rarely two.
It is a monogamous breed in which couples collaborate in the various stages of the reproductive event, although it is the female who does most of the work.
The life cycle almost never reaches beyond 8 years.

Ecological role –
The Long-tailed Tit is a bird with sedentary and nesting habits, a regular migrant and winter visitor. It is mainly diurnal and moves for most of the day among the branches of bushes and trees in search of food, then seeking shelter from the weather and any predators in the thick of the tree vegetation in the evening.
In fact the broods can also fail due to the numerous predators or to adverse environmental conditions.
In winter, to protect from the cold, it swells the plumage and gathers in groups of 5 to 18 specimens. These winter flocks are territorial and actively defend a common area of ​​about twenty hectares. Inside there are the dormitories, places to drink and various feeding areas, patrolled daily along fixed routes. With the arrival of spring, the group gradually dissolves giving rise to various couples who settle in different parts of the common area.
Northern populations can migrate further south during the cold months, but in general this bird is sedentary.
The Long-tailed tit feeds essentially on small insects, small arthropods, favoring small moths (of which they also eat eggs and caterpillars. Food is mainly found by inspecting branches, leaves and trunks, while it is rarer that they hunt their prey on the fly.
Especially during autumn and winter, these birds can also feed on seeds and grains, berries, fruits (persimmons, olives), buds and tender leaves.
The codibugnolo is particularly tolerant to human presence, colonizing without problems also the cultivated areas, plantations, orchards and parks and gardens of suburban and peripheral areas.
It is a protected species, at present substantially stable despite being subject to periodic and accentuated fluctuations.