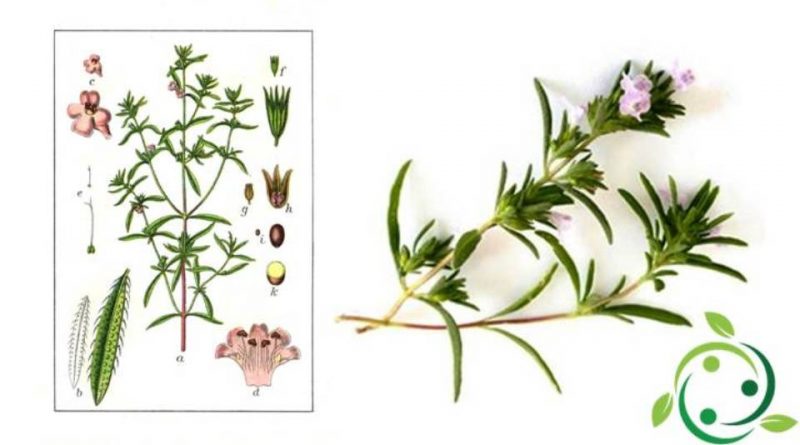 Savory (Satureja L., 1753) is a genus of aromatic plants used both in cooking, as an aromatic spice, and for its medicinal properties.

Origins and History –
Savory is a plant, originally from the Mediterranean, known and used since ancient times, so much so that it is known for certain that in Roman times Satureia hortensis was used to flavor sauces and vinegar. In fact, the leaves are very flavoring and fall into the composition of Provencal herbs.
In ancient times it had much fame as an aphrodisiac. Not surprisingly, the cultivation and collection of monks was forbidden.
The Greeks dedicated it to Dionysus, capable of making men and women lose their inhibitions so that they could launch themselves into unrestrained and liberating dances.
However, Saint Hildegard recommended savory as a remedy for gout, paralysis and diarrhea.
In the Renaissance it was called “sauce for the poor”, and in the 17th century it was recommended by the doctor Pietro d ‘Argellata, in the form of a decoction in wine, to treat mouth ulcers.
Today savory is also widespread in central-northern Europe and western Asia, and is part of many blends of herbs: it enters, for example, the composition of Provencal herbs and that of the German aromatic bunch, which mixes it with celery, parsley and dill.
We find it in the khmeli suneli, which is a mixture of spices from the Caucasus region, which also includes marjoram, dill, basil, possibly parsley, mint and coriander leaves – and in a Bulgarian mixture, where it is worthy company with paprika, savory, basil , lovage and garlic.
Many kitchens prefer to use anchovy grass (as savory is also called) to season vegetables and especially legumes. The intense and aromatic taste of savory, slightly pungent, marries wonderfully also with cabbage, courgettes, potatoes, mushrooms, tomatoes and many other vegetables. It is not advisable to cook it for a long time, better to add it at the end of cooking.
Modern herbal medicine has confirmed many uses attributed to savory by popular medicine, which enhanced its antiseptic and stimulating properties for the intellect. Herbal tea can be used to gargle against sore throat, rubbing a leaf on insect bites is useful to relieve discomfort and swelling.

Description –
Savory is an aromatic herb whose properties make it a good natural remedy for various ailments. The name Grass of beans is also known, as it grows in the same period.
Among the most used species are the winter Satureggia (Satureja spicigera (K.Koch) Boiss., 1879) the Summer Savory (Satureja hortensis L., 1753) the Mountain Savory (Satureja montana L., 1753) and the Sardinian Savory ( Satureja thymbra L., 1753).
Savory belongs to the Lamiaceae family and is recognized as it has a thin stem and can reach a height of 40 cm.
The leaves are small and pointed, with a shade similar to gray.
The flowers are light, white or pink in color, very fragrant but seem to be unpleasant for some insects, such as mosquitoes.

Active principles –
The savory, despite the differences between the various species, as an officinal plant, has many properties.
These properties are related to the particular composition.
Savory contains a fair amount of mineral salts and precisely calcium, sodium, phosphorus, potassium, iron, zinc, copper, manganese, magnesium and selenium. Other substances are made up of ashes, proteins and fats. The water is contained in the percentage of 9%.
In savory we find some chemical compounds belonging to the terpenes family such as borneol, nerol, geraniol.
There are also vitamin A, some B vitamins, vitamin C. Finally almost half of it is made up of dietary fiber.
Other substances contained in the savory are, limonene, cimene, camphene and myrcene.

Properties and Uses –
The substances contained in savory have intense aromatic properties and are often used in perfumery. These chemical compounds are also active against kidney, lung and intestinal infections for which savory is used both as a medicinal herb and as an officinal herb.
The properties are: antiseptic, antispasmodic, carminative, expectorant, stimulant and stomachic.
In addition, the essential oil obtained from savory has antiviral and antibacterial properties thanks to the presence of eugenol, carvacrol, thymol and is therefore recommended in cases of colds and flu.
In the food field, the plant is mainly used for seasoning legumes and in the preparation of liqueurs.
Savory is also an excellent honey plant, it is bottled by bees, from which honey can be obtained, sometimes it is unifloral but very rarely because this herb is not widespread in the area and the plants remain very small.

Preparations –
Savory goes very well with red meat dishes with a strong flavor and that require special seasonings and prolonged cooking: it can be used as an aromatic herb in roasts, to flavor stews and stews.
Savory, gives the more delicate white meats a fresh and balsamic flavor. Its “lemon” aroma also goes well with fish and shellfish. Together with eggs, cheeses, it allows to give that balsamic and fresh scent, all Mediterranean.
Another classic use of savory is to combine it with legumes: nature allows these two ingredients to mature in the same period, and that they compensate each other in terms of flavor and nutrients. Chickpeas, beans, green beans, lentils are cooked in water and then simply passed in a little oil with fresh savory.
Savory can be used in cold legume salads, choosing the youngest and most tender leaves. In winter, it can be added to ragù and legume stews; it can be used dry for the preparation of soups, pastes and soups: it will make the dish balsamic and fresh, even without cooling its energy too much.
In summer it can be used in savory pies, in vegetable salads; add it to your raw pasta or poke, both in the classic version, then with raw fish, and in the vegan version.
Savory can be tried alone or together with other aromatic herbs: it can be combined with sage and rosemary in the summer grills, or with lavender to give a Provencal touch to the dishes, or with mint to flavor the cooked vegetables. It can be used in a mixture, or even alone, to flavor tofu, or in the preparation of vegetable cheeses, such as cashew goat cheese.