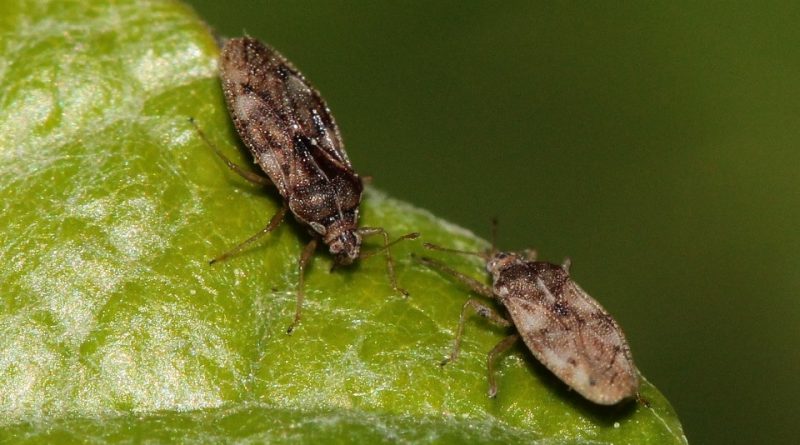 Geographical Distribution and Habitat –
The small bedbug of the almond tree is a heteroptera insect that lives preferably at the expense of the almond tree but which can equally attack the Pear Tree, the Poplars and the Tremoli (Populus spp.) And, moreover, it can become a common pest of many agricultural crops.

Morphology –
This insect is recognized, in the summer generation, as it is a small flat bug of 2.1 x 0.65 mm, for males and 2 – 2.1 x 0.7 – 0.75 mm for females.
The rostrum is clearly visible on the head.
Features four-item antennas.
The prothorax and the emelitre are decorated with relief grids; a very invisible midpoint above the hemelith.
The body takes on an ocher-brownish color, with darker transverse spots than the bottom due to the wings which are transparent but darkly stained in some places and spread over the body.
The front legs are inserted on the posterior part of the posternum and the tarsi are biarticulated.
The larva, which passes through 5 larval stages, assumes respective dimensions: 0.3 – 0.4 mm; 0.5 – 0.6 mm; 0.68 – 0.71 mm; 0.9 – 1.0 mm and 1.25 – 1.35 mm for the last stage.
The eggs are recognized to be bright white, ellipsoidal in shape, with dimensions of 0.7 – 0.8 mm x 0.17 mm.

Aptitude and biological cycle –
Monosteira unicostata overwinters as an adult between dry plant residues or at the base of the plants or, again, in the ravines of the rind.
The activity of the wintering stadium, according to the climatic conditions, resumes from the end of March until May.
The mating of adults occurs immediately after and the oviposition is visible between the ribs, inside the mesophyll with the egg partially protruding outside. Egg that is covered with abundant dark excrements produced by adults and, later, by nymphs
Each female lays around 70 eggs, individually or in groups, inserting her ovipositor in the leaf near the main rib.
From these eggs there is the first generation, active in the period between May and June, whose adults flicker in June and which will give rise to the second generation, active in July, with adults who flicker at the end of the month.
The embryonic evolution lasts from 15 to 18 days (first generation), or from 10 to 12 days (successive generations). The 5 larval stages last respectively from 10 to 12 hours, 36 hours, 48 ​​hours, 48 ​​hours and 72 hours.
In favorable climatic conditions, and especially in the southernmost areas, the adults of this second generation give rise to a possible third generation that occurs in late summer; the adults of this will overwinter.
Therefore the insect performs from 2 to 3 generations per year.
The almond Cimicetta lives in colonies on the underside of the leaves, especially near the ribs where, with nutritional bites, they cause damage.

Ecological role –
The main crop attacked by the unicosted Monosteira is the almond tree especially in the summer; other crops frequently affected may be poplars, cherry trees, peaches, plums and pear trees.
These insects perform many stings on the leaves to extract the sap, weakening the plant which, in severe cases, can lose the leaves or undergo a vegetative slowdown due to the need to overcome these attacks. The attached leaves are whitish in color.
On the upper page of the leaves we note the appearance of silvery chlorotic areas, in correspondence of which, on the lower page, there are numerous blackish dots (consisting of the eggs partially stuck in the mesophyll and covered with excrements) and the mobile forms of the insects.
The possible fight against this phytophagous must be carried out only in the presence of attacks that can have serious repercussions on production and, normally for those related to the second or third generation.
Furthermore, some species of the Anthocoridae, Cecidomyidae and Coccinellidae families are natural predators of these parasites.
However, their presence is often limited by pesticide treatments for other phytophages with the result that, in these cases, the containment of the unicosted Monosteira can become more problematic.