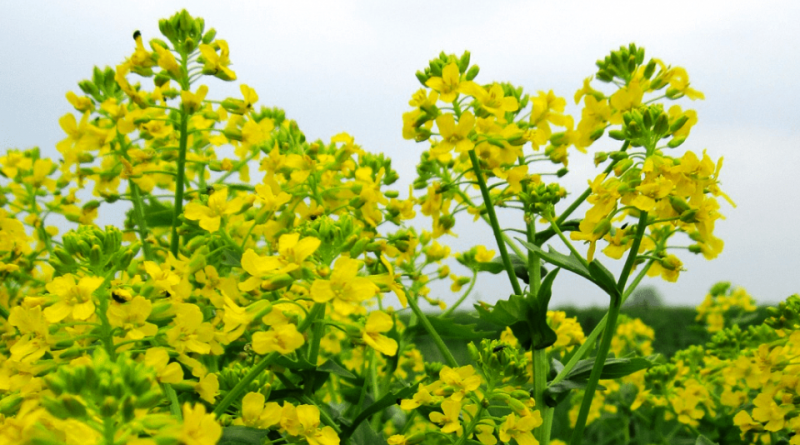 The bittercress (Barbarea vulgaris R. Br., 1812) is a perennial herbaceous species belonging to the Brassicaceae family.

Etymology –
The term Barbarea of ​​the genus is dedicated to Santa Barbara, protector of artillerymen, miners and firefighters, is invoked to prevent lightning and explosions. Rembert Dodoens in his Cruydeboeck (1564) called one of these plants Herba Sanctae Barbarae, name translated in Barbarea by Henry Lyte in his A niewe Herball of 1578 and was taken up by the Scottish botanist William Townsend Aiton in 1812.
The specific epithet vulgaris comes from vúlgus volgo: very common, ordinary due to its large diffusion, banal.

Geographical Distribution and Habitat –
Bittercress is a species found in almost all areas of the world, especially in the cold and temperate-cold areas of Eurasia.
In Italy the herb of Santa Barbara is present, with two subspecies, in all regions, except in Sardinia. The regional distribution extends over the whole territory, from the coasts to the valley bottom of the Alpine sector; in Karst the species is sparse and inconstant.
Its habitat is that of roadsides, drained wet meadows, where it likes neutral or acid soils. 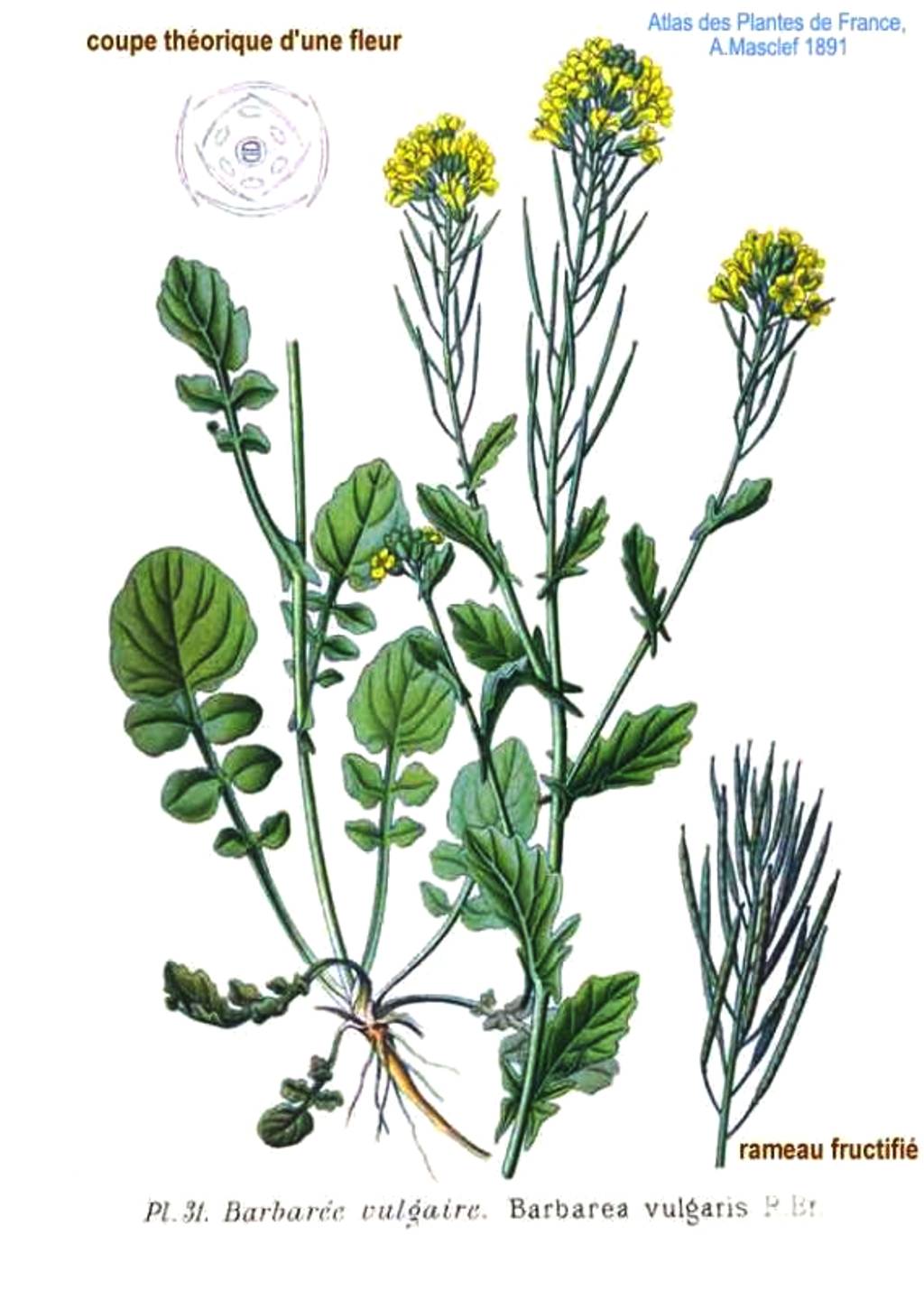 Description –
Barbarea vulgaris is a perennial herbaceous plant up to 90 cm high, with erect bearing.
The upper leaves are slightly divided, unlike the lower ones.
The flowers are cruciform, yellow in color and gathered in dense and large racemes which form a panicle.
It blooms from April to July
The fruits are straight, erect-patent siliques, 1-1.5 X 20-25 mm, attenuated at the apex, with subtetragonal section, with 2-3 mm stylus, on 3-5 mm erect-patent peduncles . Seeds of 1.3-1.5 mm, ovoid or ellipsoid, brownish.

Cultivation –
Bittercress is a plant that grows spontaneously but that can be grown taking into account that it prefers moist soils and clayey-silty soils.
It can be propagated by seed and must however be kept under control because it tends, especially in soils with a good supply of organic substance, and therefore nitrogen, to gain the upper hand.
In general, however, it is an easy-to-grow plant that, in addition to seed, multiplies by “division of the foot” in the double-petal varieties.

Uses and Traditions –
The name of this plant is dedicated to Santa Barbara who is the patroness of artillerymen, miners and quarrymen, that is, of those workers who are exposed to the dangers of explosions. Barbarea vulgaris was dedicated to this saint because its leaves were widely used in the treatment of wounds suffered during these activities. As if to correspond to this honor, the plant is always of a shining green on the day of Santa Barbara, that is on December 4th.
The leaves of Barbarea vulgaris, green and shiny, resemble those of watercress (Nasturtium officinale) and in the past were used for salads, constituting a rich source of vitamin C. The somewhat bitter taste, however, made it replace by new varieties of watercress. In some geographic regions, for example in Scandinavia and North America, B. vulgaris is still used as a vegetable.
This plant is called “cress of meadows”, a quite appropriate name since its living environment is the edges of the roads and the edges of the hedges, as well as the banks of the streams and ditches.
The plant has pharmaceutical properties: antiscorbutic, diuretic, vulnerable. However some texts advise against prolonged use of the leaves as they could be harmful to the kidneys. The fresh plant is rich in vitamin C and therefore antiscorbutic and purifying. Fresh leaves have cleansing and healing properties.
In the kitchen we use the leaves which are eaten cooked or raw in salads; young stems are collected before the flowers open and cooked like broccoli.
Although Barbarea vulgaris is not a highly decorative plant, it is equally used in gardening especially as a mosaic and border plant. There are cultivation varieties (or cultivars) with multiple orders of petals.
At pasture level not all animals feed on this plant (while cattle regularly graze it, horses reject it).

Preparation method –
In addition to pharmaceutical uses where it is used with infusions and decoctions, this plant is consumed for food use where both leaves and tender flowers and stems are used.
As mentioned, the leaves, together with the firoi, are eaten cooked or raw in a salad and the young stalks are collected before the flowers open and cooked like broccoli.
In different parts of Europe (such as in England and Sweden) the leaves of the Santa Barbara herb are collected, boiled in water and then eaten as a vegetable.