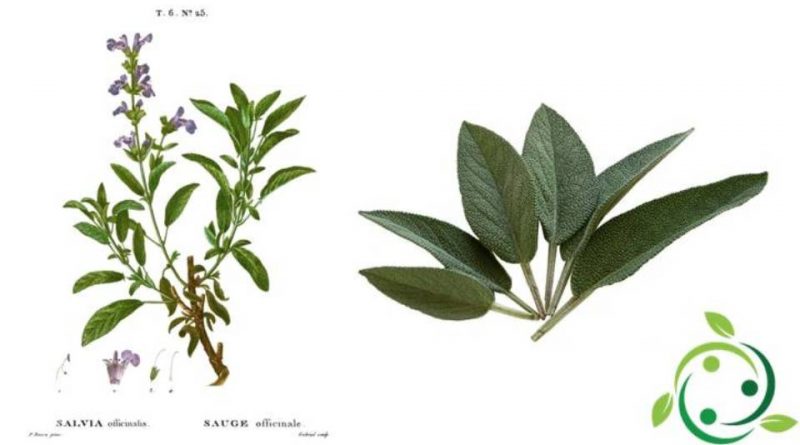 The common sage or, simply, sage (Salvia officinalis L., 1753) is a small aromatic perennial plant used as a spice and aromatic plant.

Origins and History –
Sage is a small evergreen shrub, whose name would derive from the Latin “salvus” (healthy) for its undisputed therapeutic virtues. In fact, among the main effects recognized to the plant is the antiseptic, digestive and calming effect. According to tradition it was used as an infusion to treat excessive sweating or against nervous exhaustion, or it was rubbed fresh to disinfect wounds or to make teeth whiter.
This plant was already considered by the Greeks and Romans the herb of health, the sage had to be harvested with a particular ritual, without the intervention of iron objects, wearing a white tunic with bare feet and well washed.
Before and after the Romans, from the ancient Egyptians to the medieval pharmacopoeia, sage was always highly appreciated in herbal medicine and not by chance Linnaeus gave it the name officinalis.
The Chinese believed that sage was able to “give” longevity: in the seventeenth century, a basket of sage leaves was exchanged by Dutch merchants for three baskets of tea.
The Gauls, in particular, believed that sage had the ability to heal all diseases and that it acted effectively as a “deterrent” against fever and cough. Some even believed that it had the power to resurrect the dead and for this it was also used in the preparation of magical rites.
In the Middle Ages, sage was still considered a real panacea, the most effective of all medicines. His range of action was very vast, and the verb “save” meant his prescription generically. In folk medicine of this period it was used as a cicatrizant on wounds and sores difficult to heal.
The same Medical School of Salerno with the writing “why should a man die in whose garden sage grows? “He credited the high value attributed to the small shrub by the medicine of the time.
Also called “sacred herb”, sage was believed to be a powerful male aphrodisiac, also able to protect pregnancies and increase female fertility. The virtue of sexual invigorator found in the leaves cooked in wine the drink of excellence.
In the Middle Ages, this plant, administered with food, like all the medicines of the time, also began to recognize the role of seasoning capable of making food more “good”.
Due to its precious value, it is possible to trace sage in many legends of every age. One of these, set in 17th-century France, features a balsamic vinegar called “vinegar of the four thieves” which was thought to be protected from the plague by some thieves who had raided houses during an epidemic that hit Toulouse.
The main ingredients were: three parts of macerated sage leaves, combined with one part of rosemary, one of thyme and one of lavender.
Still at the end of the twentieth century sage was recognized aphrodisiac virtues, officially explained by the presence of phytoestrogens that increase fertility.

Description –
Sage, belonging to the Labiatae family, looks like an evergreen shrub: it has an erect stem, which can reach a maximum of 70 cm and the leaves have a characteristic shape (they look like small spears, long and fairly tapered) and they appear rather thick and hard.
The flowers are of a color ranging from blue to purple, generally appear in spring, preferring the sun, although it can also be found in rather harsh climates. It is generally found in Mediterranean areas and in cultivated vegetable gardens while it is very difficult to recognize it in the wild. Its “cycle” lasts about 5 years, after which it must be planted again.

Properties and Uses –
Among the main effects recognized to the plant is the antiseptic, digestive and calming effect. According to tradition it was used as an infusion to treat excessive sweating or against nervous exhaustion, or it was rubbed fresh to disinfect wounds or to make teeth whiter.
Furthermore, in the kitchen, Salvia has been used since ancient times, as an aromatic plant.
In general, its anti-inflammatory, balsamic, digestive and expectorant properties are particularly well known for sage. It is also able to treat painful menstrual syndromes and menopause disorders (in particular that annoying disorder called “caldane”: for this reason it is also called “natural estrogen”). It offers a good response against water retention, edemas, rheumatism and migraines and is also indicated in gingivitis and abscesses. It is a “deterrent” to diabetes and accelerates the healing process after an injury.
Sage is a stimulant of the body, it helps during the menstrual cycle and fights the states of asthenia and depression. It is particularly indicated in case of physical or intellectual exhaustion, but not only: it is very beneficial for the brain and helps memory. Some ancient Chinese doctors also used it to treat insomnia. It is also a gastro protector because it has an antispasmodic action and is useful in diabetes because it reduces blood sugar. An estrogenic action is also recognized to the plant which acts effectively as anti-sweat. Often it is also used as a remedy to digest and, if properly stored, it “saves” food from decay.
Sage is widely used in cosmetics.
Many toothpastes are based on sage; in the absence of the prepared product, you can simply rub the teeth with a fresh leaf to obtain a whitening effect. A sage infusion allows the dark color to be restored to the hair and the lotions prepared with sage cleanse the skin. To prepare an astringent sage tonic you need 4 tablespoons of dried sage and ethyl alcohol, a pinch of borax, 3 tablespoons of witch hazel and 10 drops of glycerin. After macerating the sage in alcohol for two weeks, the obtained substance must be filtered, the borax dissolved in the witch hazel and the alcohol added. Then the glycerin is added and everything is transferred into a bottle with a vacuum stopper. Before using the preparation, it will be good to shake the container.
Furthermore, sage, like other species of the same genus, is frequently used in gardening: its flowers and its overall appearance are the elements that have contributed most to its success as an ornamental plant.
It is a plant particularly visited by bees for pollen and nectar. On the Dalmatian coast, a single-flower honey is produced.
As with all plants and food, any contraindications should always be followed.
Sage is contraindicated for those suffering from nervous diseases and should be consumed with caution by women during the lactation period; moreover, you must be very careful not to let it come into contact with iron containers. It should also be remembered that essential oil is toxic to the nervous system and can cause epileptic seizures even in very small doses. As a herbal tea, it can only be used for short periods.
Sage contains a complex ketone, thujone, which can be toxic in high doses. This has an impact on both culinary and medicinal use and explains why sage was used as an aroma but not, for example, as a salad.
European legislation has established a maximum limit on the content of thujone in food, which is 25 mg / kg in the case of foods flavored with sage. In the United States of America, the law currently sets a cap on thujone content.

Preparations –
Sage is an aromatic plant and its active ingredient is obtained from the leaves, which are harvested in the spring and summer months, since this plant prefers warm climates, while it is left to rest in winter. The inflorescences are left to dry in shady places and stored in canvas or paper bags. To keep the fresh leaves well, instead, you have to put them in small glass jars away from the light.
Sage leaves are used in cooking fresh or dried to flavor foods, from first courses to second courses of meat and fish and even in savory pies. You can also prepare an excellent drink to restore strength to a convalescent person: macerate for 100 days for eight days. dried leaves and flowers in a liter of wine and drink a small glass after meals. Sage smoke eliminates cooking and animal odors. To make excellent sage pancakes, prepare twenty large sage leaves, 200gr. flour, cold mineral water, salt and oil. Mix the batter with the flour, water and a little salt. Wash and dry some sage leaves and when the oil is hot, dip the leaves in the batter and fry them. Drain them on paper towels and sprinkle with salt. Serve them hot and fragrant accompanied by dry and fresh white wine.
Despite its Mediterranean origin, the presence of sage to flavor meat of various kinds has been consolidated for centuries in almost all the culinary traditions of Europe. Less common but not uncommon is its use for different types of food: pasta (tortelloni with butter and sage very well known in Italy), herb cheeses, soups and sage leaves fried in batter. In the Middle East, sage is used to flavor mutton roast.