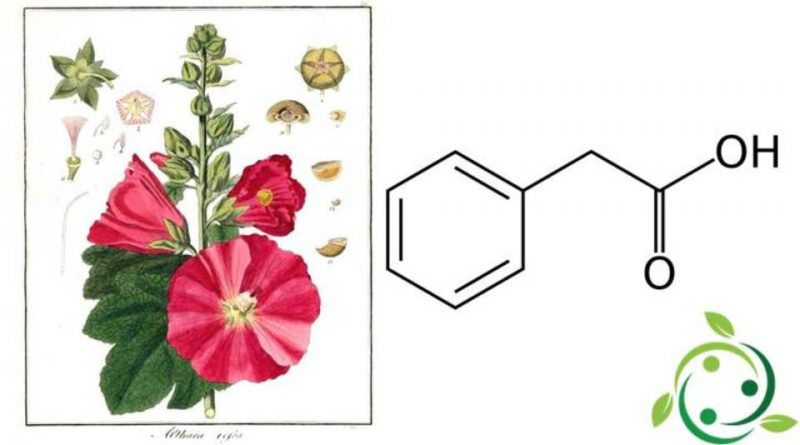 Phenylacetic acid (PAA) is a carboxylic acid with brute or molecular formula: C8H8O2.
Phenylacetic acid is also known by various synonyms, such as: α-toluic acid, benzeneacetic acid, alpha-tolyl acid, 2-phenylacetic acid and β-phenylacetic acid.
This organic acid is a compound containing a phenyl functional group and a carboxylic acid functional group.
In its natural state it appears as a white solid with a strong honey-like odor. Endogenously it is a phenylalanine catabolite.
As a commercial chemical it is subject to controls in countries including the United States and China as it can be used in the illicit production of phenylacetone (therefore used in the manufacture of amphetamine substitutes).
Phenylacetic acid is present in nature and is an auxin (a plant hormone); it is found mainly in fruits. However, its effect is much weaker than the effect of the indole-3-acetic acid of the basic auxin.
Furthermore, this molecule is naturally produced by the metapleural gland of most ant species and used as an antimicrobial.
Phenylacetic acid in humans is also the oxidation product of phenethylamine, following the metabolic action by the monoamine oxidase and the subsequent intermediate metabolic product which is phenylacetaldehyde, by the enzyme aldehyde dehydrogenase; these enzymes are also found in many other organisms.