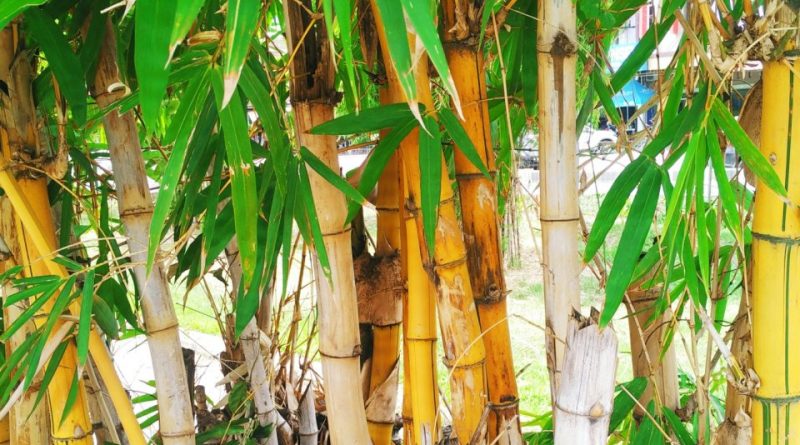 Geographical Distribution and Habitat –
Common bamboo is a species native to Indochina and Yunnan province in southern China, but has been widely cultivated in many other places and has been naturalized in several regions.
The habitat of this bamboo is mainly on the banks of rivers, on the sides of the roads, wastelands and open land, generally at low altitudes. It grows best in humid conditions, but can tolerate unfavorable conditions such as low temperatures and drought. 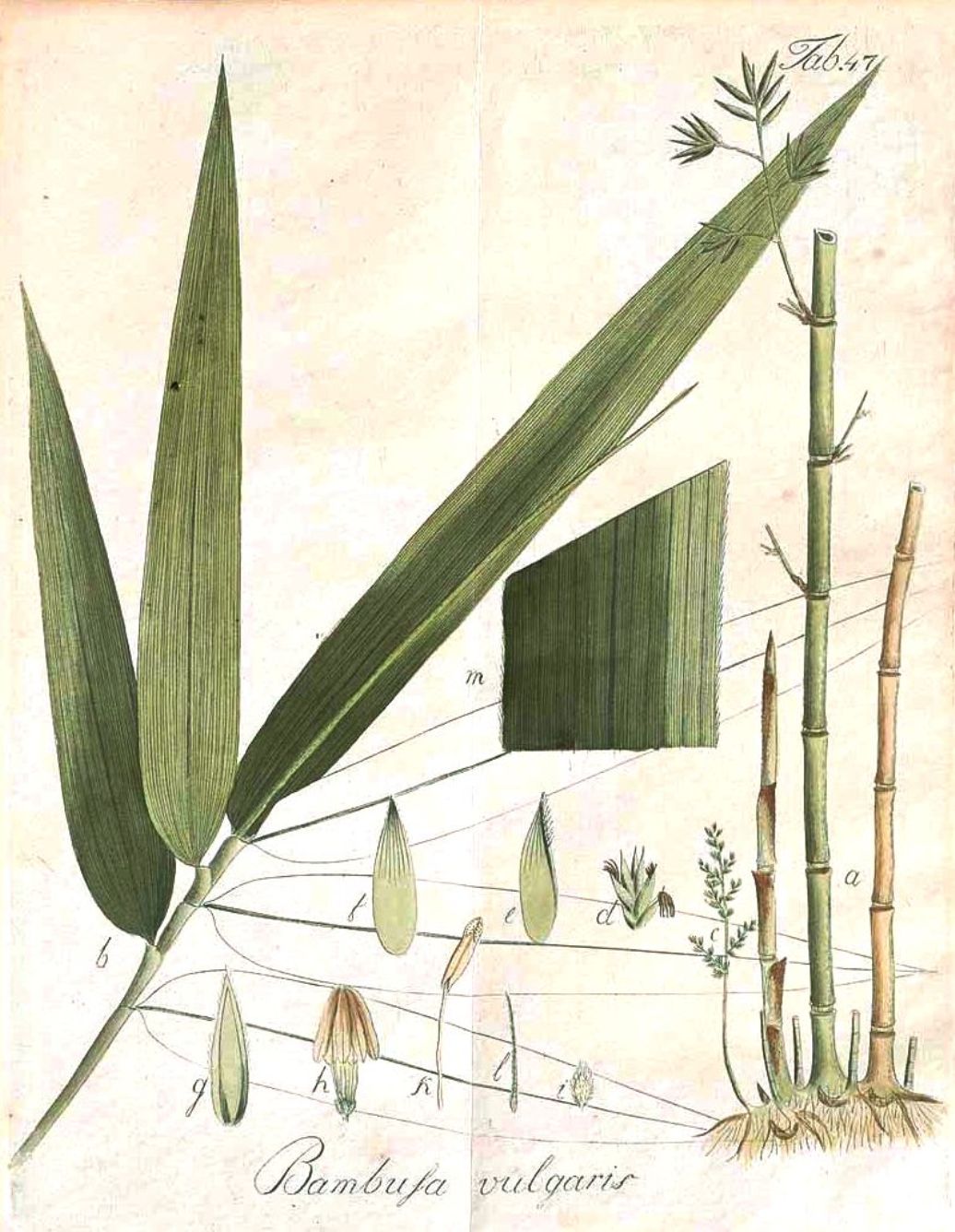 Description –
Bambusa vulgaris is recognized in that it tends to form moderately loose tufts and has no thorns.
The stems, or culms, are lemon yellow in color with green stripes.
The stems are not straight, not easy to divide, rigid, with thick and initially strong walls.
The culms grow 10–20 m in height and 4–10 cm in thickness. They are basically straight or flexible (alternately bent in different directions), lying on their tips. The walls of the culm are slightly thick and the knots are slightly inflated. The internodes are 20–45 cm. Several branches develop from the nodes of the medulla.
The leaves are deciduous with dense pubescence and the laminae are tightly lanceolate.
Flowering is uncommon and there are no seeds. The fruits are rare due to the low vitality of the pollen due to an irregular meiosis.

Cultivation –
Although Bambusa vulgaris is adaptable to a wide range of soils, it grows more vigorously on moist soils. It can tolerate frost down to -3 ° C and can grow on soils up to 1,500 m above sea level, although at higher altitudes the stems grow shorter and thinner. In case of extreme droughts, it can completely defoliate.
For cultivation, it should be remembered that the vegetation propagates through the division of the group, by rhizome, cutting of the stems or branches, stratification and marking.
The simplest and most practiced cultivation method is the cutting of culms or branches. In the Philippines, the best results were obtained by preparing one-node cuttings from the lower parts of the six-month culms.
When a stem dies, the group usually survives. A group can also grow from the stem used for poles, fences, various objects, stakes or poles.
Over several decades, the entire population of an area blooms simultaneously and the individual stems carry a large number of flowers. The easy propagation of Bambusa vulgaris explains its wild spread.
In Africa farmers sometimes prefer to buy it rather than plant it, as they believe it damages the soil.

Uses and Traditions –
Common bamboo is the most cultivated bamboo in all the tropics and subtropical regions. Although mainly cultivated, spontaneous populations, fled and naturalized, exist in all tropical and subtropical areas.
This bamboo species is most successful in Pakistan, Tanzania and Brazil.
This plant was famous as a greenhouse plant in the 1700s; it was one of the first bamboo species introduced in Europe. It is believed to have been introduced to Hawaii at the time of Captain James Cook (late 18th century) and, in fact, in these territories it is the most popular ornamental plant.
Bambusa vulgaris has been a species widely cultivated in the United States and Puerto Rico since the introduction of the Spanish in 1840. It may have been the first foreign species introduced to the United States by Europeans.
It is a preferred species for erosion control.
Common bamboo has a wide variety of uses, including stems used as fuel and leaves used as fodder, although a large amount of leaf ingestion is known to cause neurological disorder in horses.
Although its cultivation is widespread, it still has disadvantages. The processing properties of the stems are poor, since they are not straight, not easy to divide and not flexible, because they are thick-walled and initially robust. In addition, due to the high carbohydrate content, the stems are sensitive to attacks by fungi and insects such as beetles. For this reason it is necessary to treat bamboo for long-term use.
Common bamboo is also widely used as an ornamental plant and boasts a good popularity for this use. It is often used and planted to create fences and border hedges.
The stems or culms of B. vulgaris are used, as well as for fences and constructions, in particular for small temporary shelters, in particular for floors, tiles, panels and walls dried with split culms or stems.
The culmo is used to make many parts of boats including masts, rudders, stabilizers and boat poles. It is also used to make furniture, wicker articles, windbreakers, flutes, fishing rods, tool handles, poles, weapons, arches for fishing nets, flues, irrigation rods, distillation rods and more.
This bamboo is used as a raw material for paper pulp, especially in India. B. vulgaris based paper has exceptional tear resistance, comparable to soft wood based paper. It can also be used to make particle board and flexible packaging paper.
The average chemical composition is made of cellulose 41–44%, pentosane 21-23%, lignin 26-28%, ash 1.7–1.9% and silica 0.6–0.7%.
In some areas it is also used for food purposes.
A 100-gram serving of young green-stemmed cultivar buds have:
– 90 g of water, 2.6 g of protein, 4.1 g of fat, 0.4 g of digestible carbohydrates, 1.1 g of insoluble dietary fiber, 22.8 mg of calcium, 37 mg of phosphorus, 1 , 1 mg of iron and 3.1 mg of ascorbic acid. A portion of young shoots of yellow-stemmed cultivars has 88 g of water, 1.8 g of protein, 7.2 g of fat, 0.0 g of digestible carbohydrates, 1.2 grams of insoluble fiber, 28.6 mg. calcium, 27.5 mg of phosphorus and 1.4 mg of iron.
In addition, this bamboo is used in many traditional medicine from all over Asia and other countries.
Many uses are found in herbal medicine, although the effects are not clinically proven. In Java, water stored in bamboo tubes is used as a cure for various diseases. In Congo, its leaves are used as part of a measles treatment; in Nigeria, an infusion of macerated leaves is taken against sexually transmitted diseases and as an abortifacient – the latter remedy has been shown to work in rabbits.
Finally some aspects related to its toxicity. Of all bamboos, only B. vulgaris buds contain taxipillin (a cyanogenic glycoside) which, when released, functions as an enzyme inhibitor in the human body, but rapidly degrades in boiling water. This glycoside is highly toxic and the lethal dose for humans is approximately 50-60 mg. A 25 mg dose of cyanogenic glycoside administered to rats (100-120 g body weight) caused clinical signs of toxicity, including apnea, ataxia and paresis. Pará horses in Brazil have been diagnosed with clinical signs of drowsiness and severe ataxia after the ingestion of B. vulgaris.

Preparation method –
In addition to the various uses, including those related to the traditional medicines of some countries, Bambusa vulgaris is also used for food purposes.
The young shoots of the plant, cooked or in brine, are edible and eaten throughout Asia.
The yellow shoots remain yellow after cooking.
In Mauritius a decoction, obtained from the sprouts, is mixed with Job’s tears (Coix lacryma-jobi L.) to make a refreshing drink.