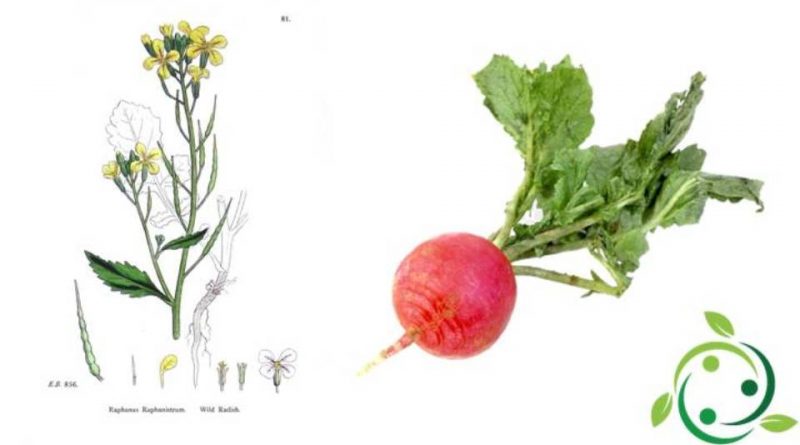 Wild radish (Raphanus raphanistrum L., 1753) is a herbaceous species used as spices both in cooking and for some of its medicinal properties.

Origins and History –
Although the term horseradish generally refers to the edible roots of various perennial herbaceous plants, this term means only the white-rooted radish and the red-rooted radish, both varieties of the species “Raphanus raphanistrum”, thus resulting improper to extend the name of horseradish to the beard, which is often called by this name.
Discoride spoke of two species, one cultivated and one wild, generically called in Greek “rafanos”.
Already Pliny, who for the wild variety uses the Latin term “armoracia”, from which we have reached the current sprig, recalls its aphrodisiac qualities: “Democritus believes that eating horseradish stimulates sexual desire …”.
For the spicy flavor, horseradish was classified hot by all ancient doctors, but its reputation as a sexual invigorator was mainly linked to the vaguely phallic aspect. The root, also for its stinging power, was used to punish adulterers in “raphanidosis”, a sort of sodomization.
From the accounts of Mattioli it seems that in the sixteenth century there was a large consumption of sprigs in Rome, while in Naples the horseradish was not eaten by the people because they were identified as food by the Spanish rulers. Confirming this last thesis there is still the use in the Neapolitan city of the nickname “radish” given to a boorish and inconsistent individual.
In the eighteenth century horseradish became a widely used plant for its healing qualities: diuretic, antibiotic and digestive. Also at that time, when warships remained at sea for several months, the sailors’ food based on salted meat and crackers was integrated, to avoid scurvy disease, by embarking barrels of horseradish juice, nasturtium and mustard mixed with spirit of wine.
During the first half of the nineteenth century, strong stimulating virtues were also recognized to horseradish, so much so as to be recommended to restore energy to those who had a weakened organism.
In the second half of the same century both horseradish and radish were included among the aphrodisiac foods, and still today the popular tradition places great trust in the exciting powers of this root.
In the kitchen, the spicy flavor of horseradish, fresh or preserved in oil or pickle, is particularly appreciated in central and northern Europe to accompany boiled meats, while adapting to flavor any dish, stimulating digestion and exercising a protective function on the intestine.

Description –
Wild radish is an annual herbaceous species, 20-80 cm high, with an enlarged taproot root and with knee-ascending stems, bristly at the base, hairless at the apex, branched in the upper half.
The leaves are bristly, with the basals in rosette, petiolate, lyrate-pinnate, with 2-8 pairs of spaced segments, irregularly indented at the margin with a larger apical segment, sub-orbicular and the less divided caulines, the upper subsessile, whole.
The inflorescence is in multiflorous naked racemes, elongated in advanced anthesis, with hermaphrodite tetramer flowers.
The flowers are characterized by calyxes with sepals of 5-10 mm, linear, often violet, erect, lateral saccate at the base and pale yellow petals, of 10-15 (25) mm, patent, veined with violet, obovate with nail as long as the flap.
The fruit is an indehiscent spongy siliqua, of (15) 20-45 (65) x 4-6 (8) mm, swollen at the seeds and constricted between one seed and another, with few (1-5) segments smooth monosperms, slightly furrowed in the dry; conical beak of (5) 10-20 (25) mm, twice the upper segment. Fruit pedicels divaricato-ascending.
The seeds are subspherical, brownish, cross-linked.

Active principles –
Wild radish contains minerals such as sodium, potassium, iron, calcium, phosphorus, vitamins A, B, C, E, niacin, proteins, lipids, tannins, riboflavin, thiamine.
Furthermore, the isocyanates contained in this and other species are being studied by researchers as potential cancer protection agents, as they inhibit the carcinogenic effects of many substances.

Properties and Uses –
Come detto, wild radish, was used, above all once, in folk medicine, of which the aerial part of the plant was used above all as a gastric stimulant and to facilitate diuresis.
Salad leaves added to other vegetables are consumed from this plant.
The taste is rather pungent. The buds are consumed like broccoli. From the seeds an edible oil can be obtained.
The leaves have a very strong flavor reminiscent of cabbage and can be boiled or added raw to the salad.
We recommend collecting the tenderest leaves or the apical part of the largest ones directly on the field. At the time of boiling it is not necessary to clean them further.
The newly blanched leaves completely lose their bitter smell and taste, while maintaining a pleasant note which, as mentioned, recalls the taste of cabbage.
They can be consumed as they are (boiled), or sautéed in a pan with a clove of garlic, or used in preparations such as first courses, ricotta meatballs or with egg and breadcrumbs, pancakes.
They accompany very well meat dishes such as roasts and boiled meats.
The root is also edible: it has a strong and spicy flavor, and can be grated on dishes.
From the fresh roots, sliced ​​and left in salt for a few hours to release the juice, you get a face mask that serves to lighten the ephelids.
From the point of view of the benefits associated with regular intake, the radish can be a useful element in the diet as it is rich in vitamin B, beneficial for the body. In any case, the radish can also be consumed to mitigate symptoms and ailments: thanks to the substances present inside the radish, it is possible to use its extracts as a diuretic, spasmolytic and analgesic. It can also be extremely effective for kidney-related disorders, particularly for kidney colic.
It is also used to combat sleep-related disorders, while originally it was also used as an adjuvant for fishing, as it is rich in ichthyotoxic substances which, however, are not harmful to humans, which can consume the fish thus caught without incurring risks. Consumption should however be kept under control, as taking in large doses or for prolonged periods of time can lead to excessive sleepiness.

Preparations –
The young leaves can be eaten in salads together with other raw vegetables (but it is good to cut them finely first).
Since the taste is very pungent, it is often used to make a sauce instead of mustard. Flower buds can be used like broccoli. Furthermore, an edible oil can be obtained from the seeds.
The collection takes place when the roots mature, taking care not to exceed the maximum growth moment too much to prevent the flavor from being damaged or in some way damaged.