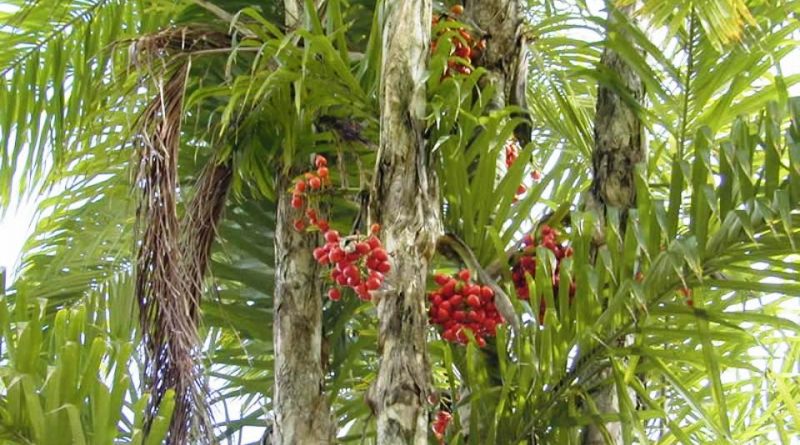 The peach palm or chontaduro (Bactris gasipaes Kunth) is an arboreal species belonging to the Arecaceae family.

Etymology –
The term Bactris comes from the Greek βάκτρον báctron cane (for walking and support): because sticks are made with the stem of this small palm tree.
The specific epipet gasipaes comes from the Brazilian vernacular name of this palm.

Geographical Distribution and Habitat –
Bactris gasipaes is a palm tree native to Central and South America that, due to its widespread use, its real origin is still under discussion. The hypotheses on its domestication place this event in the southwestern part of the Amazon, in the Colombian valleys close to the Pacific Ocean or independently in different areas of Central and South America.
Studies carried out by the Global Biodiversity Information Facility (GBIF) have shown that the distribution of this palm goes from Honduras to central Bolivia and the Brazilian state of Pará.
Its habitat is that of well-drained soils, with acid pH and annual rainfall between 2000 and 5000 mm. 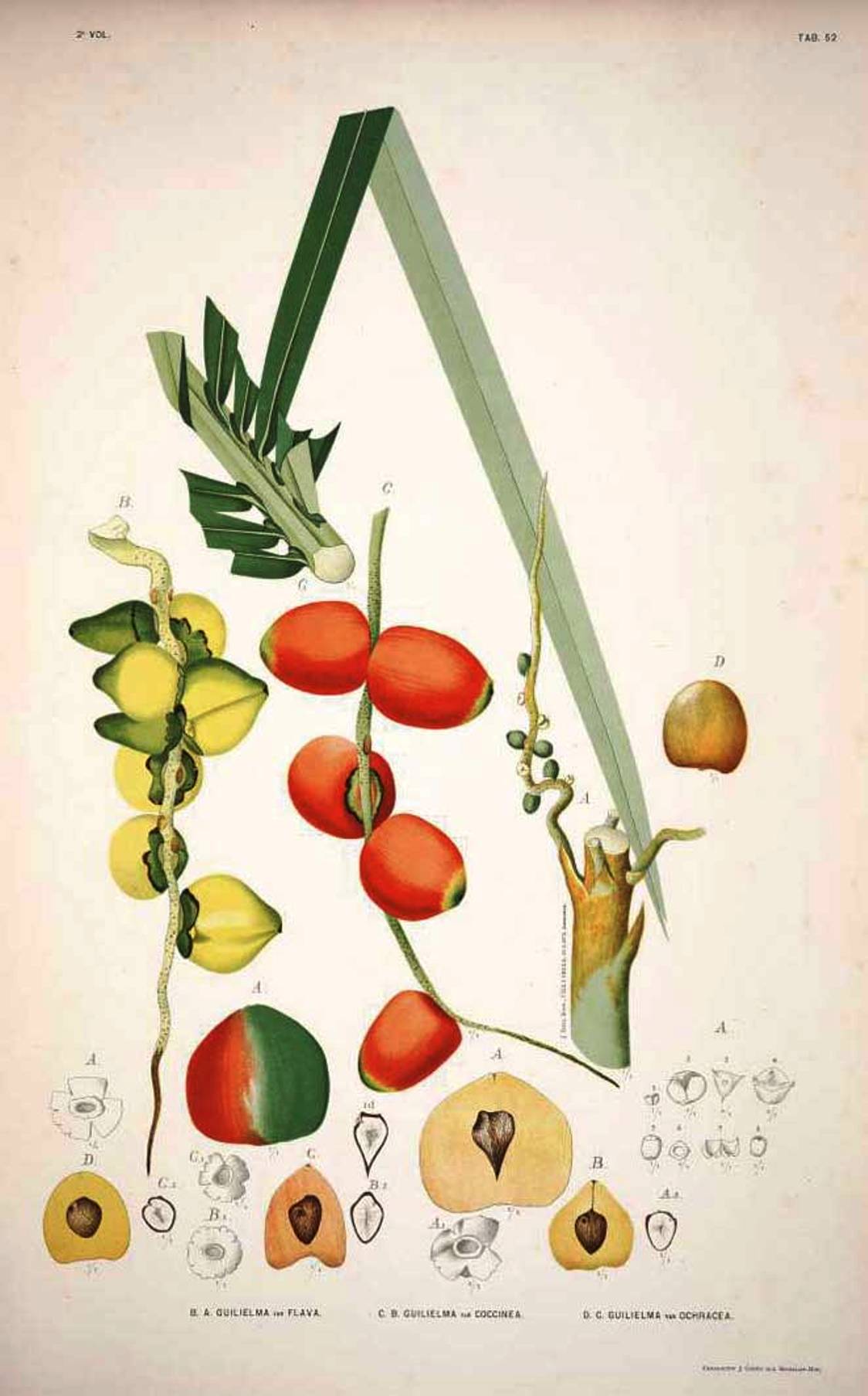 Description –
Bactris gasipaes is a palm tree that grows with an erect bearing with a single slender jamb or, more frequently, with several jambs of about 20 cm in diameter grouped together.
The trunks are equipped with rigid perpendicular spines, dark in color and of decreasing length from the base to the top.
When fully ripe, each jamb can reach a height varying between 12 and 20 m.
The roots can extend horizontally up to 4 or 5 m away from the plant; although most of them remain about 20 cm above the ground, the main roots can go up to 2 m deep.
The apical apex of the jambs has from 10 to 30 pinnate leaves, generally without thorns or with small thorns on the sheath, on the petiole or on the ribs.
The petiole measures between 49 and 179 cm, while the rachis can reach a length of 4 m; the number of lateral segments can vary from 180 to 386 elements.
It is a monoecious plant, that is, with male and female flowers on the same plant.
The inflorescences are initially enclosed by two bracts: one external, hard and triangular, which measures about 13 cm wide and one internal, often covered with thorns. In full development the spathe can reach a length from 51 to 126 cm. The peduncle can measure from 10 to 17 cm, while the inflorescence spine reaches 75 cm in length; 25 to 145 fertile secondary rachids (up to 45 cm long) are grafted onto it. The female flowers are irregularly arranged among the male ones and have a yellow or, more rarely, green color and are 3 to 13 mm long and 4 to 12 mm wide; the male flowers are smaller, cream-yellow in color and their six stamens are arranged in pairs on the sides of the corolla.
The fruits are drupes with variable shape and color that varies from yellow to brown or orange, depending on the variety.
The color of the mesocarp is also variable, from cream to orange.
The endocarp, inside which we find the seed, is dark in color and is usually found in the central part of the fruit, with a shape that can be ovoid, elliptical, round or wedge-shaped. This has a length that varies from 1 to 4 12 cm, a width from 1 to 2 cm and a weight that can reach 9 g; it can be found free from or adhering to the mesocarp.
Each inflorescence can also carry over 700 ripe fruits, for a total weight of 20 kg.
Parthenocarpic fruits are also frequently found which are generally smaller than the fertile ones.

Cultivation –
Peach palm is a palm tree that has great ability to adapt to a wide range of climatic and ecological situations within the tropical and subtropical regions of the American continent.
However, it grows mainly on well-drained soils and prefers climates with well distributed rainfall, between 2000 and 5000 mm per year, and an average temperature above 24 ° C.
However, it does not tolerate swampy and poorly drained soils and grows up to an altitude of 800 m a.s.l., although in Colombia, in the Cauca department, it can be found up to 1800 m a.s.l.

Uses and Traditions –
Bactris gasipaes was one of the most important palm trees in pre-Columbian America. Phylogenetic studies on chloroplasts and on the DNA nucleus have shown the close relationship between the cultivated variants (Bactris gasipaes Kunth var. Gasipaes) and the wild ones (Bactris gasipaes Kunth var. Chicagui).
The fruits of this palm still represent the main crop for the Amerindian populations of tropical areas, both wet and dry.
In addition, the wood of the trunk is used for the construction of bows, arrows and spears.
Cultivated since pre-Columbian times, this species has taken on more than 300 different indigenous names, all prior to the European invasions.
The importance of this palm, for the natives, was testified by the first Spanish colonists in Costa Rica who, in order, gave greater value only to their wives and children.
In ancient times the fruit mesocarps were eaten after boiling the fruit, or the pulp itself was chewed to make a pulp, which was then fermented for one or two days; water was then added to it to obtain a drink. If the fermentation was continued for up to 8 days, the natives obtained an alcoholic drink that they took during the celebrations.
In addition, the natives of central and southern America had found several ways to preserve the fruit; among these there was the custom of cooking them or drying them or smoking them.
Finally, the palmito obtained from the top parts of the trunk was also consumed, but did not reach the same importance as the fruits.
Today, however, palmito, especially in recent years, has turned into a commercial product of growing importance, especially intended for niche markets and used for food purposes.
Male flowers are used as a condiment by indigenous peoples; in traditional medicine, moreover, the roots are used as a dewormer.
Bactris gasipaes wood was once used by Native Americans to build weapons, while today it is used to make parquet, furniture and carving.
A further use is the ornamental one, where some specimens without thorns are also cultivated and marketed for this purpose.

Preparation method –
The cultivation of this palm is now carried out for the collection of the fruits, which can be eaten fresh, even if around the pericarp there are often calcium oxalate crystals and a trypsin inhibitor, which make digestion difficult; for this reason the fruits are more often boiled to eliminate substances that are difficult to take. The mixture obtained after boiling, to which water and sugar are added, once fermented for a couple of days can become a drink.
In addition, the mesocarp of the fruits is an excellent source of carbohydrates and essential oils, as well as carotene and vitamin C (which, however, is almost completely eliminated during cooking).
A type of gluten-free flour can also be obtained from the mesocarp, which is marketed on a small scale in various countries.
The fruit also produces an oil used to manufacture cosmetic products and soap. Finally, second-choice fruits are used to feed farm animals.
Finally, palmito is used for salads, soups and fillings, it is considered a good source of dietary fiber and contains modest quantities of iron and magnesium.