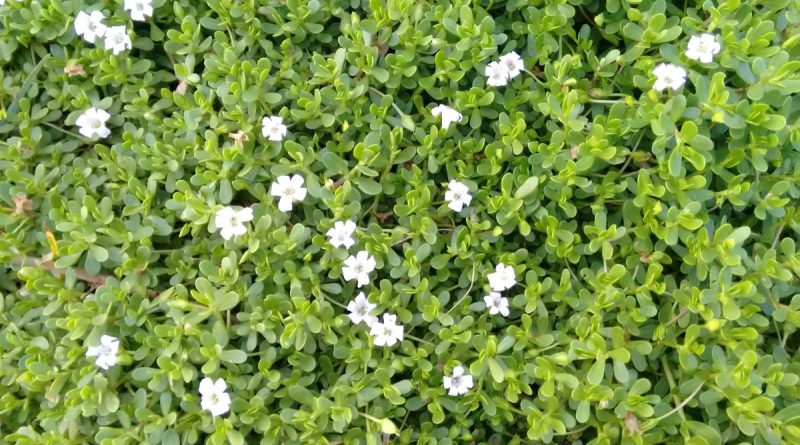 Etymology –
The term Bacopa comes from the indigenous name in use in French Guiana, an area of ​​early finds, as stated by Jean Baptiste Christophore Fuséé Aublet in Histoire des Plantes de la Guiane Françoise of 1775.
The specific monnieri epithet was given in honor of the French botanist Louis Guillaume Le Monnier (1717-1799).

Geographical Distribution and Habitat –
Bacopa is a plant native to the wetlands of southern and eastern India, Australia, Europe, Africa, Asia, North and South America.
Within its genus this plant is the most widespread species and is present in the marshy areas in India, Nepal, Sri Lanka, China, Pakistan, Taiwan, Vietnam, tropical and southern Africa, Madagascar, Australia, the Caribbean, as well as in Middle and South America. It is also found in Florida, Texas and Hawaii.
Its habitat is that of wet and marshy environments near lakes, streams and pools of water. 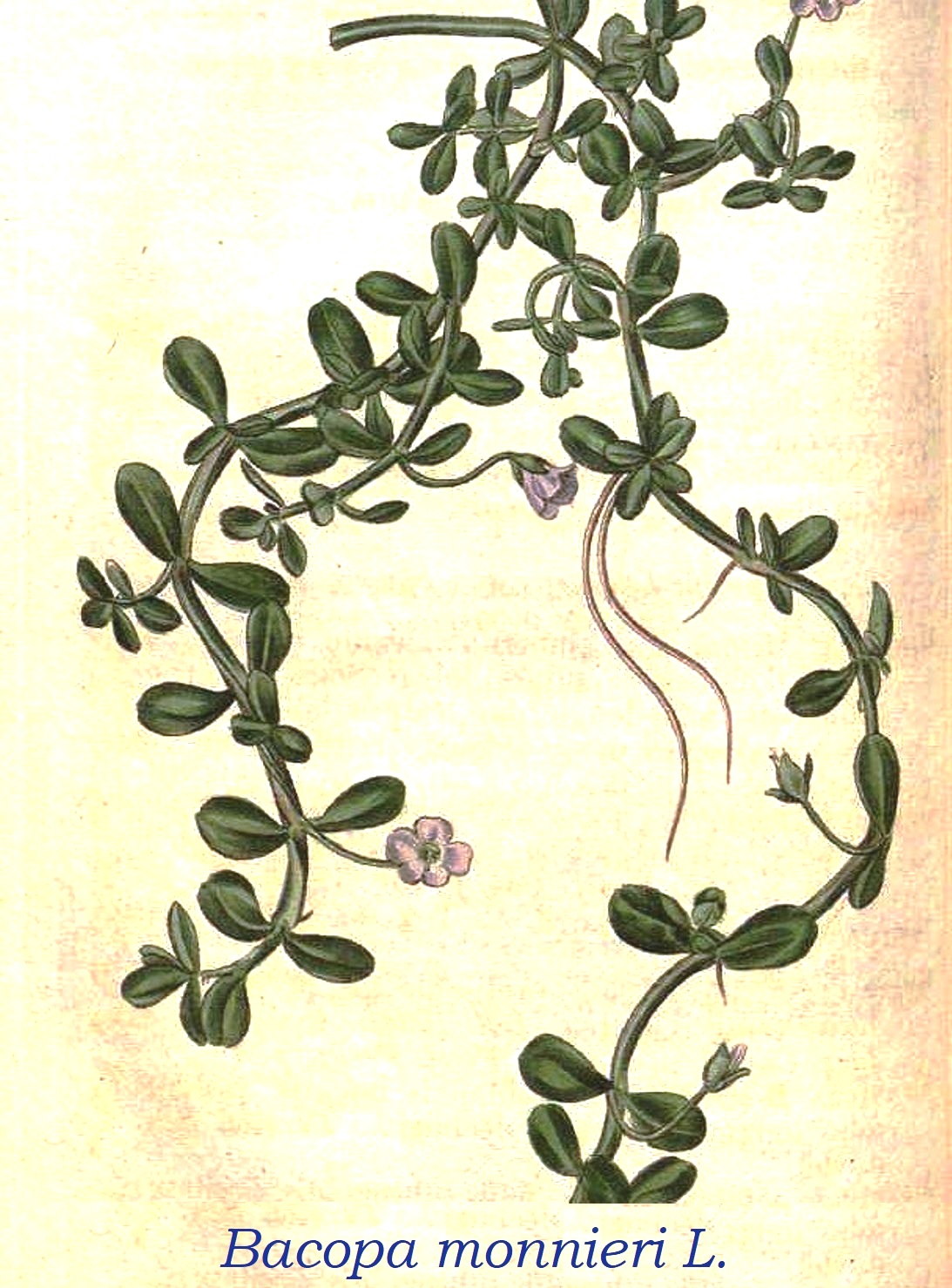 Description –
Bacopa monnieri is a creeping herb with succulent, oblong and 4-6 mm thick leaves.
The leaves are oblanceolate and are arranged opposite on the stem.
The flowers are small, actinomorphic, white in color, with 4-5 petals.

Cultivation –
Bacopa monnieri is an herb of easy propagation and cultivation that can even grow in conditions of soils and slightly brackish environments.
Propagation is often achieved through cuttings.
Due to its ability to grow in water, this plant is suitable for cultivation, as an ornamental, as an aquarium plant.

Uses and Traditions –
Bacopa monnieri is a plant used since ancient times in traditional Ayurvedic medicine to improve memory and treat various ailments. Clinical research has found that Bacopa monnieri can improve cognition.
Bacopa is a plant used as a natural remedy since ancient times both in Asia and the Americas but in Europe it is little known.
This plant has been used for thousands of years in India in traditional Ayurvedic medicine where it is called Brahmi.
In fact, the origins of this plant are linked to the lands of India and its use as a medicine was indicated for problems of asthma, epilepsy and mental disorders.
In India it is believed that this plant helps in all mental health problems because it can “open the door to full knowledge”.
The substances contained in this plant are very active on human physiology and have a very marked effect. Specifically, some individual active ingredients have been identified such as stigmasterol, betulic acid, beta-sitosterol and bacosaponin. The active action on man’s cognitive function has been linked to the presence instead of bacosides. All these substances are little known by the population also because they are very specific and quite rare. Precisely for this reason Bacopa is a truly interesting and useful plant for its beneficial properties on memory and mental activities.
These substances are extracted from the leaves and stem of Bacopa to prepare healthy remedies for the body. From these extractions various forms of remedies are obtained from syrups to decoctions, from single-dose vials to tablets, from juices to powders, from hydroalcoholic extracts to essence oils.
Each of these forms has its own specific way of taking and its own dosage.
As mentioned, according to Ayurvedic medicine, Bacopa is a plant indicated for the treatment of all brain diseases. Its effect cures any mental illness from memory problems, psychological and nervous disorders.
In traditional Chinese medicine it is also used as a general tonic that even helps in problems of sexual activity, especially male, such as premature ejaculation, impotence and infertility.
In America, however, it is used for the treatment of non-acute pain and as a diuretic and natural laxative in the form of a decoction. In particular, the forms of taking bacopa are used in this country as fresh extracts and juices.
In this case the active ingredients include flavonoids, saponins, epigenin, sucurbitacin, luteolin, vitamin C and mineral salts such as iron, calcium and phosphorus.
Furthermore, in the case of neuralgia and various forms of headache, especially if of nervous origin, Bacopa is a valid natural remedy.
Bacopa is mainly taken for its beneficial properties on the brain but it is also an excellent natural anxiolytic that counteracts stress, depression and anxiety.
This benefit is given by its property because it regulates serotonin levels which, as we know, is the good mood hormone.
The regular intake of this remedy therefore helps against various mental and neurological problems, particularly if of nervous origin. In addition, Bacopa is excellent for promoting sleep and for countering all forms of nervousness.
Bacopa is therefore a valuable neuroprotective and natural anxiolytic but also has other excellent properties such as a general anti-inflammatory action of the body and a cardioprotective action of the circulatory system.
In addition, Bacopa is also used for its beneficial properties towards the respiratory system, in fact it is indicated in the treatment of asthma and bronchitis.
Finally, the digestive system is also positively affected by the use of Bacopa thanks to a rebalancing of intestinal motility that combats digestion, flatulence, constipation problems and also in case of ulcers in the gastrointestinal tract.
The use of the fresh plant can give several specific benefits in different areas of body wellness. First the juice intake of this plant is a tonic and a natural pain reliever.
In addition, the use of fresh extract at the topical level acts on skin problems such as psoriasis, eczema of various origins and skin ulcers.
From redness to injury, this plant has a healing effect on the epidermal tissue. It also has a preventive action against dandruff because it balances the skin and even helps against hair loss.
Side effects include that Bacopa monnieri can cause nausea, increased intestinal motility and gastrointestinal disturbances.
Additionally, in 2019, the FDA issued warning letters to manufacturers of food supplements containing Bacopa monnieri that advertised health claims for the treatment or prevention of stomach disease, Alzheimer’s disease, hypoglycemia, unproven blood pressure and anxiety and illegal. The FDA has stated that Bacopa monnieri-based products have not been approved for these or other medical purposes.

Preparation method –
Bacopa monnieri can be used in the form of syrups or decoctions; used in various forms, from single-dose vials to tablets, from juices to powders, from hydroalcoholic extracts to essence oils.
The use of the fresh plant is also a form of intake and the advantage of this plant is also its pleasant taste that allows it to enter cooking recipes in association with other vegetables or aromatic herbs.