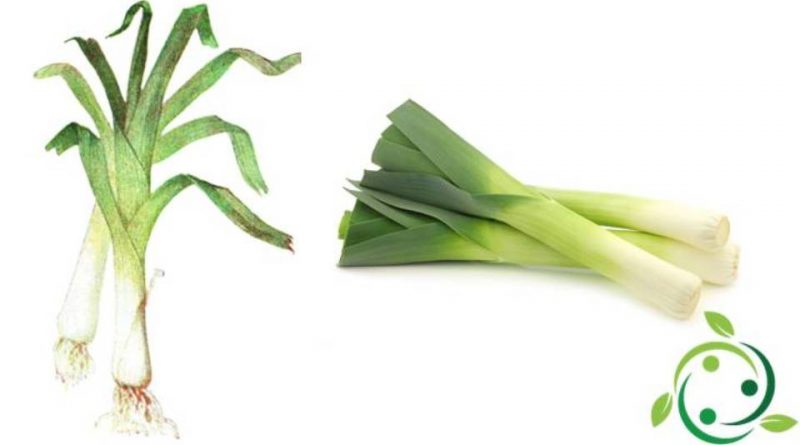 Leek (Allium ampeloprasum L.) is a biennial herbaceous plant, used since ancient times for both food and pharmaceutical purposes.

Origins and History –
Leek is a herbaceous plant of the same family of garlic and onion and whose origin is uncertain, some believe it comes from the Middle East and others from the Celtic territories.
It is a vegetable, also cultivated by the Egyptians, which boasts a respectable past both in the cuisine and in the Greek and Roman pharmacopoeia.
Hippocrates recommended its consumption to increase diuresis and milk production in the suckler. Discorides claimed he dreamed of scary things and stimulated Venus.
Pliny wove the praises of the leek stating that “taken in a barley cream, or eaten raw without bread, one day and one no, it also benefits the voice, sexual pleasure and sleep”. The Latin historian completed his analysis by telling singular anecdotes such as that of the emperor Nero who, every month on set days, ate only leeks seasoned with oil to preserve a beautiful voice.
The aphrodisiac properties of leeks were also sung by the martial poet: “If the envious age loosens the nuptial knot, your food will be leeks …”.
In the Middle Ages, the Salerno Medical School confirmed the virtue of leeks to make girls fruitful, and herbalists recommended them for internal use to treat the lungs and respiratory tract, for external use to stop bleeding and against insect bites.
In the 16th century Giordano Bruno saw in the leek a phallic symbol, attributing to him the quality of transforming himself into the male seed.
The doctor Castor Durante, in the “Health Treasury” published in Rome in 1586, offers a fairly complete picture of the virtues attributed to the vegetable until then:
“The balanced consumption of leek causes urine, facilitates menstruation … stimulates venus; cooked with apples cleans the lungs, reduces asthma … cooked under the ash solves headaches; removes drunkenness, … improves the voice and makes women fruitful “.
In the seventeenth century. Jacques du Four da la Crespèliere, physician, poet and libertine even wrote a poem to be able to amply describe the miraculous virtues of this herbaceous plant.

Description –
The leek belonging to the Liliaceae family is a herbaceous plant whose basal portions of the leaves are commonly consumed, called sheaths, which overlap to form a cylindrical false stem. There are two varieties, one with summer ripening, smaller and more tender, the other with winter ripening, less tender and with a more intense flavor. The main Italian varieties are the Giant of Italy, with a sweet taste, the long leek of the Riviera.
It has opposite dark green or yellowish green leaves which are brought together to form a sort of pseudo-stem.
The flowers are greenish white, formed by three pieces and carried in an umbel inflorescence at the end of a floral scape that develops in the second year of the plant’s life.

Active principles –
Leek is a plant that contains good doses of potassium, phosphorus, vitamins and fiber.
From the point of view of composition and nutritional values, leek contains, on average:
– 87.7% of water;
– 3.8% sugars;
– 1.8% fiber
– 1.5% protein;
– 1% ash;
– 0.3% fat;
it is also rich in minerals, such as: potassium, magnesium, selenium, phosphorus, copper, iron, sodium, calcium and manganese, while among the vitamins are mentioned the A, B1, B2, B3, B5, B6, C, E, K and J. There are also numerous amino acids and the folic acid content is good. We also report the intake of antioxidants and, in particular, beta-carotene, lutein, zeaxanthin and also contains allicin.
Finally, to underline, how leek is a low calorie food, given that 100 g of product only provide 29 calories.

Properties and Uses –
The leeks, due to their particular composition, in the kitchen give the best of them raw, but they are exquisite in the oven, or added to soups and creams.
The edible part of this vegetable is represented by the basal part of the leaves (the white part), while the green apical part of the leaves is commonly discarded.
The variety Allium ampeloprasum var. kurrat, commonly called kurrat, is grown in Egypt and the Middle East. It is widely used in Arab and Maghreb cuisine, mainly for the leaves.
In traditional Chinese medicine and macrobiotics, leek is considered a warming food.
Leek is an important ally of the digestive system as it helps the digestive process, thanks to the presence of essential oils that stimulate the secretion of gastric juices. In addition, it has interesting carminative properties that reduce intestinal gas, useful in case of abdominal bloating and areophagy.
Leeks also have an antiseptic action on the digestive system, which make them useful even in case of intestinal inflammation, due to food poisoning but also for viral causes. Finally, it is recommended for those suffering from constipation: water and fiber make it a light laxative, also valuable against hemorrhoids.
As in the case of garlic and onion, leek contains allicin, a chemical that has an antibiotic effect. In this sense it is particularly useful in case of rheumatism, arthritis and gout, but also for colds or flu states, for which it is also useful the content of vitamin C, which strengthens the immune system.
Furthermore, among the properties of leek it is important to underline also the detoxifying and diuretic ones. In this case, we must thank the rich content of potassium and the reduced sodium content which, so proportionate, promote the secretion of liquids in the body and the elimination of toxic substances by means of the kidneys. Highly recommended, therefore, for those with kidney problems and against water retention.
Furthermore, thanks to the supply of potassium, leeks are also beneficial for the cardiovascular system since they contribute to a correct regulation of blood pressure and have the ability to lower the blood levels of bad cholesterol, thus preventing cardiovascular diseases.
Finally, the antioxidants present contrast free radicals and cellular aging.
Beyond the calorie content, the diuretic effect and the detoxifying properties, leek is suggested in slimming diets because it is a food with a good satiating effect. Equally known are the aphrodisiac properties and to reconcile sleep, as well as to keep the throat and vocal cords healthy. The richness in minerals and vitamins, then, make leek an excellent tonic, in case of chronic convalescence or weakness and tiredness.
As for any contraindications, please note that it does not present any particular ones, except for specific intolerances or allergy to allicin. It is recommended to limit its use in case of low blood pressure, urinary incontinence, nickel allergy, instead, recommended in pregnancy due to folic acid, but paying attention to wash it carefully and consume it cooked, always referring to the indications of your doctor .

Preparations –
The leek must be purchased or harvested whole, including the roots, with the stem straight, white, firm and smooth. The tense leaves, thick and crispy even to the touch. In this way we can recognize a fresh vegetable, to be purchased and stored in the refrigerator, in the vegetable compartment and with the tops of the covered leaves, only if in these conditions it can last a long time. Finally, it is a good habit to avoid cooking the leek and keep the leek, even in the refrigerator, since it oxidizes very quickly and becomes toxic.
Leek can be eaten both raw and cooked, and both the white and the green part can be used. Often the white one is served raw in pinzimonio or to enrich salads, but it can also be used to prepare stews, side dishes with cooked vegetables, minestrone, velvety, patties or omelettes according to the season.
The flavor of the white part is very reminiscent of that of garlic or onion, so leek can be used as a substitute for all those preparations that use it: the result is however a more delicate aroma, given that leek is less strong and intense. The green part, on the other hand, has a more bitter taste and is used for the preparation of sauces, soups and pies.