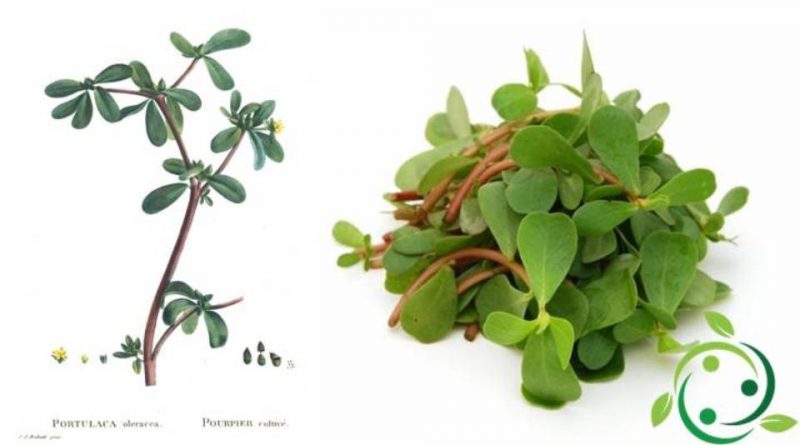 Purslane (Portulaca oleracea L.) is a succulent herbaceous plant used for a long time in the kitchen.

Origins and History –
Purslane is a spontaneous plant already present for food or medicinal use in remote antiquity.
Harvested spontaneously, or sometimes cultivated, it has been consumed since ancient times as an aromatic herb in the Mediterranean regions.
In the seventeenth century the cooks of Charles II added it to salads, sometimes mixing his young chopped leaves with twice the quantity of lettuce, chervil, borage flowers and calendula petals, to then season them with oil and lemon juice.
Medieval culture attributed an apotropaic value to the plant, the power to keep evil spirits away. Its culinary use is reported to the court of Louis XIV, the Sun King, but over time the ingredient has fallen by the wayside, before a new rediscovery over time.
In ancient times and in traditional popular use, even recently, it was considered an antiscorbutic, diuretic or anti-diuretic food-remedy, and with refreshing, i.e. anti-inflammatory properties, indicated in urinary disorders, stomach acid and gastritis. Dioscorides also added the use as anti-inflammatory for the eyes and pain-reliever (headache), febrifuge (in juice) and deworming.
Curiously, priests, apothecaries and even official herbal medicine, still in the 19th century, considered it “anaphrodisiac”, being part of the “four cold seeds” (chicory, lettuce, endive, purslane).
Since it resists sun, heat, pollution and saline soils well in vegetable-deficient countries (Greece, near East, South America, etc.), it can also be grown (P. sativa) and sold in local markets.
In Italy, with the abundance of vegetables available, it has not been harvested or sold in the markets for centuries, if not infrequently and locally (Lazio) for the characteristic and increasingly rare mixture of summer field vegetables (“mixed salad” raw).
From an organoleptic point of view, it is certainly tastier and more interesting than the usual salad vegetables, including lettuce and cappuccina, almost tasteless and scarce in properties. The tenderest leaves and twigs, which have a fresh and acidic-salty taste, are eaten in mixed peasant salads or more rarely as an original side dish. It also goes well with raw tomatoes and onions. It is also used boiled and in egg omelettes, sautéed in butter or fried in batter, added to soups, broths and sauces.

Description –
Portulaca is an annual, herbaceous, hairless plant with prostrate-creeping stems of 10 ÷ 40 cm, enlarged and fleshy, branched, smooth, hollow and often reddish.
The leaves are light green in color, with a short petiole of about 2 mm, the upper verticillate; they are fleshy and sessile, alternate, spatulate with truncated apex, oval, hairless, up to 3 cm long.
The flowers are small and not at all showy, yellow, in the axil of the leaves, with 5 petals, they open for a few hours during the morning, only when the sun is shining, they are solitary or gathered in small groups of 2 ÷ 5.
The fruit is a capsule, called pissidium, compressed-fusiform, membranous, containing many small dark-colored seeds.

Active principles –
Being a succulent plant, Portulaca is rich in water but also in omega 3, polyunsaturated fatty acids that perform a beneficial action for our body, this vegetable source is suitable for introducing these substances if you follow a vegetarian or vegan diet.
Thanks to the high concentration of omega 3 and alpha-linolenic acid, the consumption of this plant helps to reduce bad cholesterol (LDL) and triglycerides, thus counteracting potential pathologies affecting the cardiovascular system.
The quantity of vitamin C contained in the leaves is also good, as are other vitamins, especially of groups A and B. There is also the presence of mineral salts, in particular iron, potassium, magnesium, phosphorus, zinc, selenium and calcium.

Properties and Uses –
Portulaca is a plant that has been used for some time in the kitchen but also for its therapeutic properties.
The raw, fleshy and acidulous buds and leaves of this plant are used for both food and medicinal purposes.
For internal use, in fact, the purslane is a medicinal herb, and a medicinal herb and to the consumption of the purslane are ascribed purifying, thirst-quenching and diuretic and anti-diabetic properties.
It is recommended to treat diarrhea, vomiting, acute enteritis, hemorrhoids and postpartum hemorrhages.
Over the years, remarkable nutritional and medicinal properties have been discovered: it is a vegetable source of omega-3 polyunsaturated fatty acids (which play a role in the prevention of cardiovascular diseases) of which it contains modest quantities, and α-linolenic acid; it has a high content of raw protein and water-soluble polysaccharides, a good tolerance to salinity and a good storage capacity for heavy metals.
With poultices made with leaves, eczema, dermatitis and insect bites can be treated.
In the kitchen you can consume especially the tenderest leaves and branches, used raw in addition to mixed salads or in accompaniment to other vegetables.
The edible part of this plant can also be added to soups or soups, or used as an ingredient to enrich omelettes with flavor or as a condiment for pasta. In this regard, we suggest a simple and quick idea to use this plant in the kitchen.

Preparations –
The portulaca are of food and culinary interest the raw sprouts and leaves, of a fleshy consistency and with a sour taste, to be consumed in salads, to which they give a superior mordant. They are also used to prepare tasty and refreshing soups and can be preserved pickled. They also come in as ingredients of omelettes and fillings.
In the Neapolitan cuisine it was once collected together with rocket from plants that grew spontaneously, and sold by street farmers. Arugula and pucchiacchella were an almost inseparable combination of the salad ingredients.
In Tuscan cuisine, purslane is used to make a typical poor summer dish, panzanella.
In Roman cuisine, the purslane, or porcacchia, belongs to that mixture of various domestic and wild vegetables, which are eaten raw in salads under the name of mixed salad or mixed salad. In the past, the friars took this salad home and asked families to give them a donation: in Corsica, purslane is still called “fresh herb”.
In Sicilian cuisine, ‘a purciddana is used for the preparation of salads, such as the Ferragostan salad with tomatoes, cucumbers, onions diluted in vinegar oil, and salt; or in the salad with boiled vegetables, where the leaves and young shoots are used with boiled potatoes and baked onions. Another use is to prepare small Purciddana fritters, in which the tops of the plant – dipped in a batter of water and flour – are fried individually in hot oil and then served as appetizers or appetizers.
In Apulian cuisine, in particular in the peasant tradition of Bisceglie, it is used as a salad together with typical cherry tomatoes, seasoned with oil and vinegar, sometimes to accompany wet stale bread called waffle or waffle (waffles).