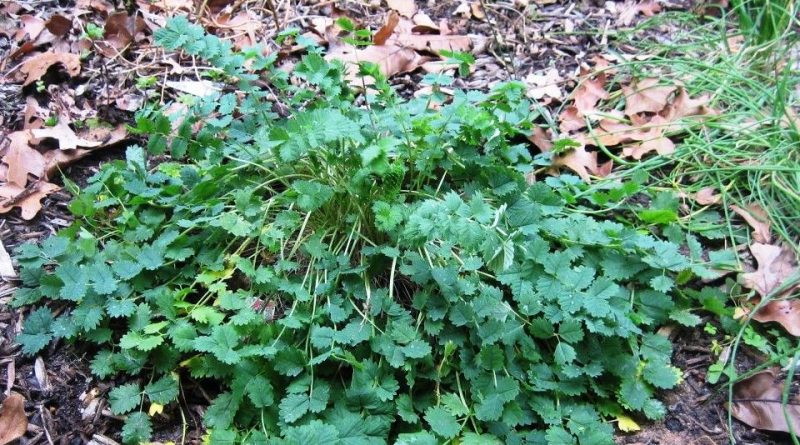 The Salad burnet (Poterium sanguisorba L.) is a herbaceous species belonging to the Rosaceae family.

Systematic –
From a systematic point of view, it belongs to the Eukaryota Domain, Plantae Kingdom, Subregion Tracheobionta, Spermatophyta Super Division, Magnoliophyta Division, Magnoliopsida Class, Rosidae Subclass, Rosales Order, Rosales Order, Rosaceae Family and therefore to the Genus Poterium and to the P. sanguisorba Species.
The term is synonymous:
– Sanguisorba minor Scop.
In Italy the following species are present:
– Poterium sanguisorba subsp. balearicum (Bourg. ex Nyman) Stace – Salvastrella balearica, which is distinguished by urnula with winged ribs and faces covered by prominent irregular and acute ridges.
– Poterium sanguisorba L. subsp. sanguisorba, which is distinguished by urnula with ribs without wings or with narrow and fine wings and ± reticulated faces.

Etymology –
The term Poterium derives from the Greek ποτηρ, -ηρος to be able, -eros cup, cup, chalice: for the shape of the chalice.
The specific epithet sanguisorba comes from the Latin words “sanguis” = blood and “sórbeo” = I sorb, probably with reference to the principle of the signature, which saw in the red color of the inflorescence the “sign” of the anti-hemorrhagic and cicatrizing capacity.

Geographical Distribution and Habitat –
The Salad burnet is a Eurasian species that we also find in North Africa but which is present in almost all areas of the world, but with important gaps.
Its preferential habitat is that of growth on rocks, in escarpments and in dry grassy places, arid meadows, garrigue, uncultivated, between 0 and 1300 m. s.l.m .. 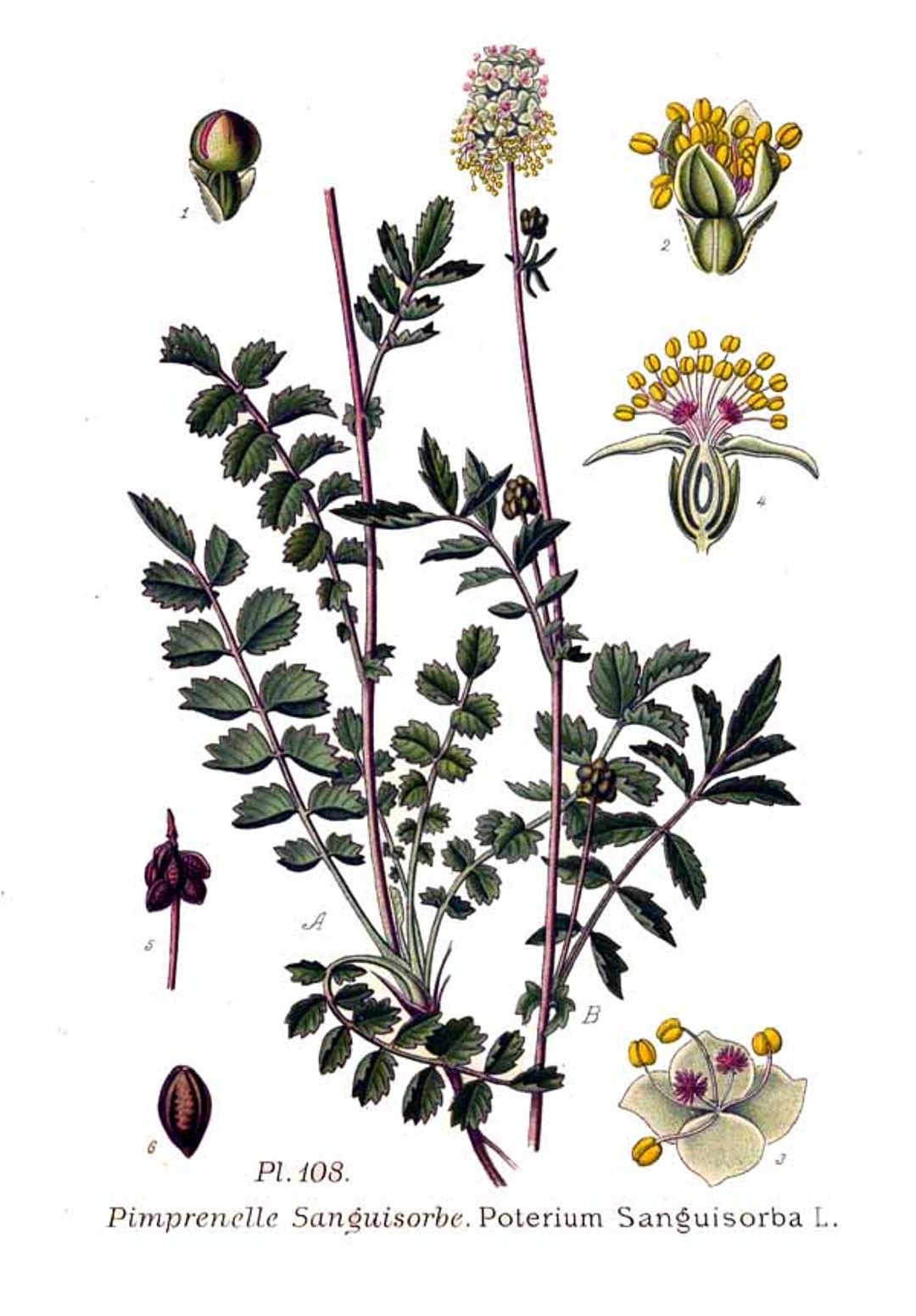 Description –
The Salad burnet is a perennial, herbaceous, evergreen plant, with woody and enlarged rhizome, erect and striated stems, simple or branched at the top, sometimes hairy at the bottom, often reddish in color; height from 20 ÷ 60 cm.
The basal leaves are gathered in rosette, 10 ÷ 20 cm long, pinnate with 5 ÷ 17 petiolate leaflets, the leaf segments 1 cm long, are elliptical with hairs scattered on both faces, are rarely hairless, have margin with 4 ÷ 6 sharp teeth on each side; the upper page is green and the lower page is glaucous. The leaves of the stem are gradually smaller and with a smaller number of leaflets.
The inflorescences in spherical-oval spikes of about 2 cm are gathered at the apex of the branches; the flowers are apetal with 4 sepaloid ovate lacinias, green or reddish with white margin. The upper flowers of the flower head are female and have a pink or red feathery stigma, the lower ones are male with numerous yellow, long and protruding stamens, in the central part there are also a number of hermaphrodite flowers whose stamens do not protrude from the calyx.
The antesis is between May and August.
The infructescence is an obovoid pometus of 2.8-6 x 2-3.8 mm, consisting of the receptacle (hypanzio) urceolate, accrescent, dry, with 4 ribs and with reticulated faces or with ± acute ridges. Inside it contains 1-3 achenes.

Cultivation –
The Salad burnet adapts to any type of well-drained soil. It does not tolerate water stagnation. It can withstand several degrees below zero. It can be exposed both in full sun and in shady places.
The sprouts tend to be collected in the spring; but being an evergreen plant it is mainly used fresh, collecting it almost all the time of the year. The rhizome is taken in the autumn, from the second year of cultivation, is cleaned and left to dry in a dark, dry environment with good air circulation.

Uses and Traditions –
In ancient times this species was known as Salad burnet and as such it was initially classified also by botanists.
The vernacular name “Pimpinella” was already in use by the ancient Romans and apparently derives from the Latin term piper ie pepper, in reference to the aromatic properties of the plant.
An old porverb, referring to the Sanguisorba minor read: “Pimpinella the salad makes it beautiful”. It was later that Linnaeus, including the Pimpinella in the genus Sanguisorba.
The pimpinella has pharmaceutical properties: flavoring, aperitif, digestive, astringent, antihemorrhoidal.
The main constituents are: tannins, triterpene saponins, essential oil, starch, calcium oxalate, vitamin C.
Poterium sanguisorba is a bitter, astringent, digestive, refreshing herb with an antihaemorrhagic and anti-inflammatory action.
It can be used for internal use in case of diarrhea, dysentery and ulcerative colitis.
For external use, the pulp of the shredded and macerated leaves in the oil is used as an anti-rheumatic and pain reliever, or the pulp alone can be applied directly on wounds, sores and burns, while introduced into the nostrils it stops the nosebleed; in decoction or infusion they are indicated for the treatment of hemorrhoids and dermatitis.
The plant smells slightly of cucumber and the tender leaves can be eaten raw in salads, or used to flavor cheeses, soups, cooked vegetables and fruit salads.
The parts used are tender leaves, fresh in mixed salads; boiled in soups and soups; chopped to flavor vinegar and cheeses.
The collection period is between January and May.

Preparation method –
In addition to therapeutic purposes, Poterium sanguisorba stands out in that the smell of the leaves is similar to that of chopped cucumber. It is added in cooked salads, soups, butter, soft cheeses and in the preparation of wines and aromatic vinegars.
The fresh leaves of this plant (similarly to those of the similar species Sanguisorba officinalis) can therefore be used to flavor salads, soups, cheeses and cooked vegetables, to which they give a light cucumber flavor.