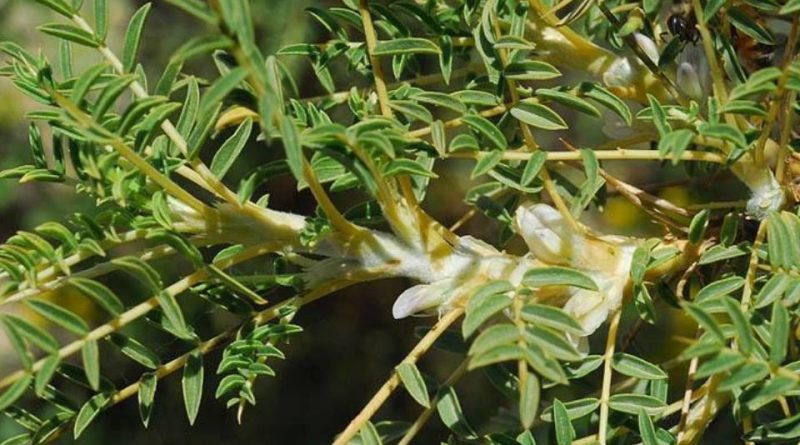 The gum tragacanth milkvetch (Astragalus gummifer Labill.) Is a shrubby species belonging to the Fabaceae family.

Systematic –
From a systematic point of view, it belongs to the Eukaryota Domain, the Plantae Kingdom, the Magnoliophyta Division, the Magnoliopsida Class, the Fabales Order, the Fabaceae Family, the Faboideae Subfamily, the Galegeae Tribe and therefore to the Genus Astragalus and to the Species A. gummifer.

Etymology –
The term Astragalus comes from astrágalus, a legume mentioned by Pliny (perhaps from the Greek ἀστράγαλοϛ astrágalos astragalus, wing, heel, vertebra, a bone used by the Greeks and Romans to also obtain game dice to which the angular shape of the seeds is recalled (second A. Gentil and Dave’s Garden) or gnarled roots (according to D. Gledhill and Flowers in Israel), according to A. Neill, the name derives instead from ἀστήρ astér astro, star and from γάλα gála latte, due to the shape and color of the flower and because it was believed to increase the milk production of the goats that feed on it, as well as the common English name Milk vetch would seem to confirm).
The specific epithet gummifer comes from gumma (or cumma) rubber and from ferero bring: which produces a rubbery substance.

Geographical Distribution and Habitat –
The gum tragacanth milkvetch is a small shrub native to western Asia, in particular the temperate regions of western Asia centralized in Iraq, Kurdistan, Iran, Lebanon, Syria and Turkey, but is also found in Afghanistan, Pakistan and Russia.
Its habitat is that of the slopes and dry sub-alpine valleys, habitable generally between 1200-2600 meters and therefore in highlands and deserts. 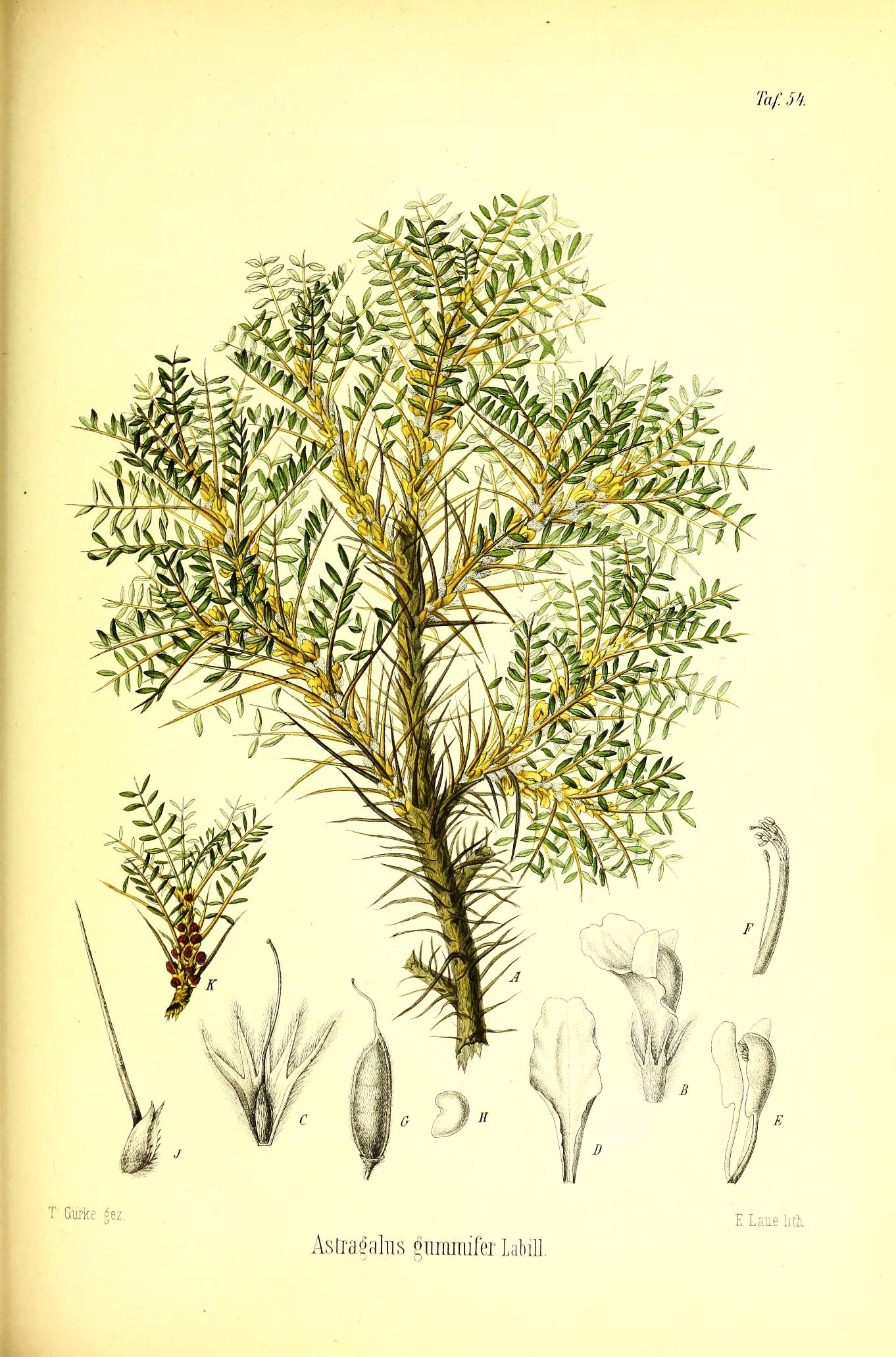 Description –
Astragalus gummifer is a small woody evergreen shrub, with a typical height of 30 cm when ripe.
It has small branches and a short woody gray stem surrounded by thorns.
The leaves are composed, stipulated with elliptical leaflets (fins) carried in opposite pairs. The rachis of the leaf ends with a sharp thorn.
The species is hermaphrodite (it has both male and female organs) and is pollinated by bees, lepidoptera (moths and butterflies).
The flowers are small and varying in color from white to off-white.

Cultivation –
The gum tragacanth milkvetch, like other legumes, is a nitrogen resixer plant, having a symbiotic relationship with some soil bacteria.
The shrub tolerates a pH range between 3.2 and 7.8 and temperatures between 5 and 10 ° C. The standard environment consists of a low water supply, full sun, no shade and soil between sandy and clayey but well drained and dry. The plant is perennial and evergreen.

Uses and Traditions –
Astragalus gummifer is a plant that has long been used for many medical, culinary and material uses.
This plant produces gummy exudates that act as a natural defense mechanism for the shrub.
Research has shown the function of these gums that serve the plant in semi-arid environments, when the bark is damaged in order to cover the wound, in order to prevent infection and dehydration.
The rubber that is originally an aqueous solution dries in hardened lumps when it comes in contact with the air and sunlight.
This particular dried sap containing rubber can be extracted from the root and stem of the plants and used as a food additive (E413) mainly as a thickener for salad and sauce dressings. Rubber is also an excellent emulsifier and can be used in the preparation of ice creams to give particular consistency.
This gum, obtained both from the roots and from the stem of the plant, also has many medicinal properties and is often called tragacanth gum. The gum acts as a demulcent, which soothes irritated tissues making it useful in the treatment of burns. Gum acts as an anticancer and stimulates the immune system to treat cancer. The plant also acts as an adaptogen that fights chronic degenerative diseases by helping the body reach normal stress levels.
The tragacanth rubber acts as a thickening agent for numerous dyes, fabrics, glues, watercolors and ink, as well as a binding agent in the manufacture of paper and lozenges.
Incense can be produced by burning the stems or the rubber.

Preparation method –
The gum of Astragalus gummifer can be used as a thickener to prepare dressings for salads and sauces; it is also used as an emulsifier in the preparation of ice creams to give particular consistency.
Its use also finds several uses in the medical field.