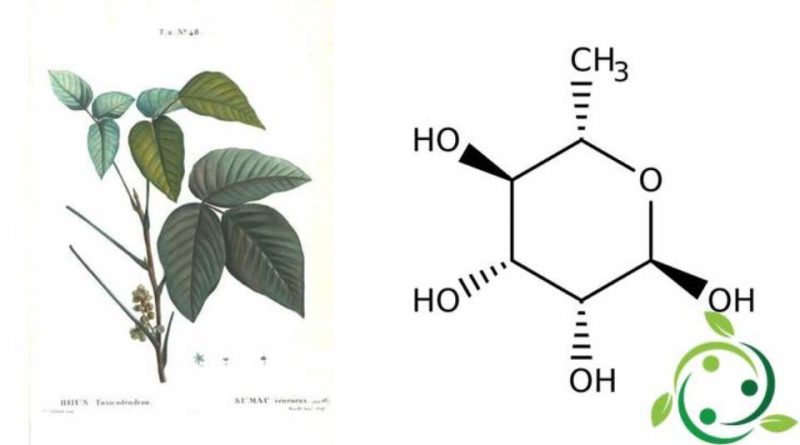 Rhamnose, whose term in the official IUPAC nomenclature is: (2R, 3R, 4R, 5R, 6S) -6-metyloxan-2,3,4,5-tetrol is a monosaccharide having a brute or molecular formula: C6H12O5.
Rhamnose is a methylaldopentose, also known by the names of isodulcite and mannomethylose and is the most important of methylpentosis.
Rhamnose is found free in the leaves and flowers of Rhus toxicodendron and, combined, in many glycosides (canferitrine, dataxin, hesperidin, frangulin, glycifylline, quercitrine, rutin, xanthoramnine), from which it can be obtained by hydrolysis with dilute acids.
This monosaccharide has a revolving revolving power and gives rise to the phenomenon of mutarotation; it is known in two crystalline forms, α and β. The α form is obtained by crystallization from saturated and hot aqueous or alcoholic solutions; it comes in the form of monocline prisms with a melting point between 82 and 92 ° C; by heating it loses the crystallization water and is partially converted into the β modification, into needle-like crystals which melt at 122-126 ° C; if exposed to damp air it changes into the α modification.
The most common optical isomer in nature is that belonging to the L series (L-ramnose).
It is also represented in nature in the form of numerous glucosides, especially conjugated to flavonoids and saponins.

It gives them greater water solubility, given their steroidal nature. In animal organisms (including man) it is not represented at the level of living cells, so it is not considered as biologically fundamental for the animal kingdom.
As for its peculiarities, according to recent studies, rhamnose would be very effective and safe to slow down the phenomena of skin aging.
This monosaccharide stimulates and restores the physiological activity of papillary fibroblasts, also called source fibroblasts, which are located in the upper dermis (other than cross-linked fibroblasts housed in the lower dermis). Papillary fibroblasts are the real culprits of the deep firmness of the skin and of the superficial smoothness, therefore of the general cutaneous youth, because they preside over the regeneration of all skin layers: under their impulse in the skin new fibers, new cells, new exchanges of power. Unfortunately, like all beautiful things, they are also very fragile, particularly sensitive to UV rays that destroy them in just 48 hours and external aggressions, and gradually, with age, they disappear. Rhamnose protects them and multiplies them.