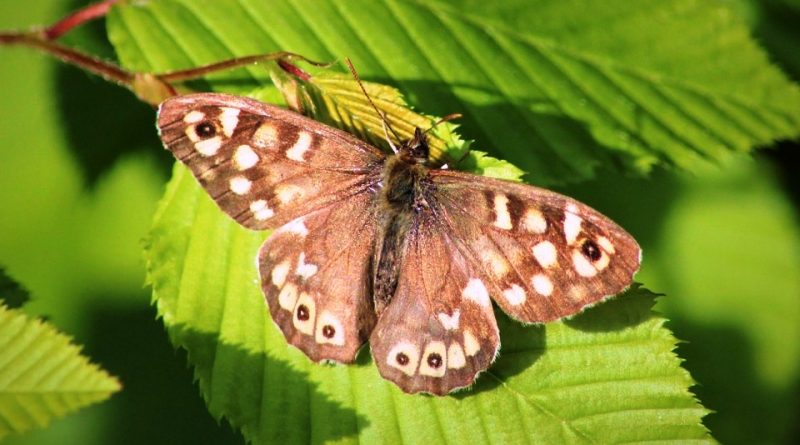 The speckled wood (Pararge aegeria Linnaeus, 1758) is a moth belonging to the Nymphalidae family.

Geographical Distribution and Habitat –
The Pararge aegeria is a butterfly that with its subspecies is widespread in Europe, especially in the northern and central area, in south-western Europe in Asia Minor and in Central Asia, in Syria, in Russia and in North Africa.
Two other subspecies are found within the British Isles: (P. a. Oblita) is limited to Scotland and the surrounding islands and P. a. Insula is found only on the Isles of Scilly.
Its habitat is quite varied as it can be found within grassy and flowery meadows adjacent to the woods, in the steppe, in the woods and in the clearings. It can also be found in urban areas next to hedges, in wooded urban parks and occasionally in gardens. Within its range, this butterfly typically prefers wet areas.

Morphology –
The Pararge aegeria is present with several subspecies that differ in some details.
The existence of these subspecies is due to the change in morphology linked to the different geographical areas where it developed and selected.
The background of the wings varies from brown to orange, and the spots are pale yellow, white, cream or fawn orange.
The average wingspan of males and females is 5.1 cm, although males tend to be slightly smaller than females. In addition, males have a row of grayish-brown scales on the front parts which is absent in females. Females have brighter and more distinct shades than males.
The caterpillar is green in color with a short, forked tail, and the chrysalis (pupa) is green or dark brown.
The subspecies P. a. the tircis is brown with pale yellow or cream spots and darker spots. The subspecies P. a. aegeria has a more orange background and the large lower back spots are reddish brown rather than black or dark gray. The two forms gradually intersect with each other.
The subspecies P. a. oblita is darker brown in color, often approaching black with white spots rather than cream. The lower part of the hind wings has a marginal pale purple band and a row of conspicuous white spots. The spots of the subspecies P. a. the insulae are fawn orange rather than cream. The lower part has pale orange spots and the lower part of the rear wings has a purple band. Although there is a significant variation with each subspecies, the identification of the different subspecies is possible.
The morphology of this butterfly gradually varies along its geographic range from north to south.

Aptitude and biological cycle –
In Pararge aegeria the fertility of the females depends on the body mass, since the females deprived of sucrose during their oviposition period have a reduced fertility. For this reason, heavier females will produce more eggs.
The number of eggs laid by a female may also be related to the time spent searching for an egg-laying site. The number of eggs laid is inversely proportional to the size of the eggs. Furthermore, it would seem that a female would produce more eggs in an optimal environment, so that she could produce more offspring and increase her reproductive capacity.
The life cycle begins during copulation in which the male deposits a spermatophore in the female consisting of spermatozoa and a secretion rich in proteins and lipids. The female uses the nutrients in the spermatophore in egg production. In a polygenic mating system, where competition between spermatozoa is present, it is useful for males to deposit a large spermatophore to fertilize as much eggs as possible and possibly prevent the female from mating again.
Since most of the females of the Pararge aegeria exhibit monandria there is a reduced competition of spermatozoa and the male spermatophore is much smaller than other species.
The eggs are laid on a variety of host plants. The species is able to overwinter in two totally separate stages of development, such as pupae or semi-mature larvae. This leads to a complicated model of numerous adult flights per year.