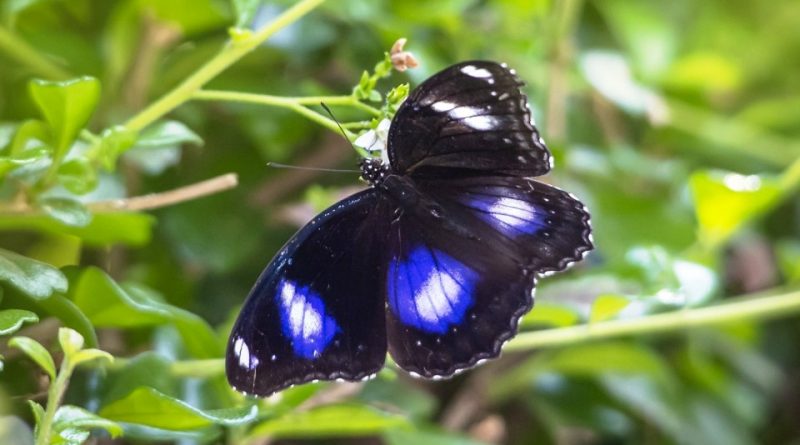 The Great eggfly (Hypolimnas bolina Linnaeus, 1758) is a moth belonging to the Nymphalidae family.

Geographical Distribution and Habitat –
The Great eggfly is a butterfly that, with its subspecies, is found in a vast range that includes: Madagascar to the west, through South and Southeast Asia, Cambodia, the islands of the South Pacific (French Polynesia, Tonga, Tuvalu , Samoa and Vanuatu) and is found in parts of Australia, Japan and New Zealand.
Its habitat is that of slightly wooded areas, deciduous forests, dense and humid scrubland and the greenest parts of human habitats.

Morphology –
The Hypolimnas bolina is a butterfly that is recognized by the black color of the wings which have an opening of about 70-85 millimeters.
The species has a high degree of sexual dimorphism, with the female mimetic and with multiple morphologies.
The male has the upper part of the wings, black in color, with three pairs of white areas, two on the front and one on the back. These areas are surrounded by a blue-purple iridescence. In addition, the upper part of the back of the wings has a series of small white dots.
The female has the upper part of the brownish brown wings and does not have spots like those of the male. The edges have white marks similar to those of another butterfly (Euploea core (Cramer, 1780).
The eggs are pale green and glassy with longitudinal ridges except in the upper part.
Caterpillars are black with an orange head. The last segment is also orange. The head carries a pair of long branched black antennae. The surface of the body is also covered with long, branched and orange black spines. These spines appear whitish and transparent immediately after the moult, but soon turn orange. In later stages the spiracles are surrounded by thin orange dirty rings.
The pupae stick in suspension for a single point; they are brown in color with a gray tinge on the wings. The abdominal segments have distinct tubercles. The surface of the pupa is rough.

Aptitude and biological cycle –
The Hypolimnas bolina is a butterfly known for the maternal care it provides. The females guard the leaves where the eggs have been laid. Males are also very territorial and loyalty to the site increases with age. In general, territories that improve the detection of females are preferred. The females, before laying the eggs, fly over the plants to check if there are ants that eat the eggs. After selecting a plant that has no ants, it lays at least one but often two to five eggs on the underside of the leaves.
After about four days the eggs hatch and, immediately, the caterpillars disperse around. These can undergo a certain decrease due to some Wolbachia bacteria that kill exclusively male specimens.
The adult butterflies emerge from the pupae after seven to eight days with the development of the females being always a little longer.

Ecological role –
The females of this butterfly show a certain mimicry according to the area where they grow. In the western areas they are monomorphic, imitating the species of the genus Danainae and Euploea. To the east it is often polymorphic and most of the forms are therefore not mimetic. In areas where it resembles Euploea, the butterfly implements Batesian mimicry.
The plants that this moth feeds on are: Sida rhombifolia, Elatostemma cuneatum, Portulaca oleracea, Laportea interrta, Triumfetta pentandra and Asystasia species.
To these are added sometimes: Elatostema cuneatum, Fleurya interrta, Pseuderanthemum variable and Synedrella nodiflora and frequently also Urtica dioica and Malva.
It is also interesting to note that, as in the Samoan Islands of Upolu and Savai’i, a parasite (probably Wolbachia) was killing, as described, the males of Hypolimnas bolina. The problem was so serious that in 2001 males represented only 1% of the population. However, in 2007, it was found that within just 10 generations (about 5 years), males had evolved to develop parasite immunity and the male population rose to nearly 40%. This evolutionary event has led to changes in a single genomic region on chromosome 25 and represents, in fact, one of the fastest examples of natural selection observed to date in natural populations.