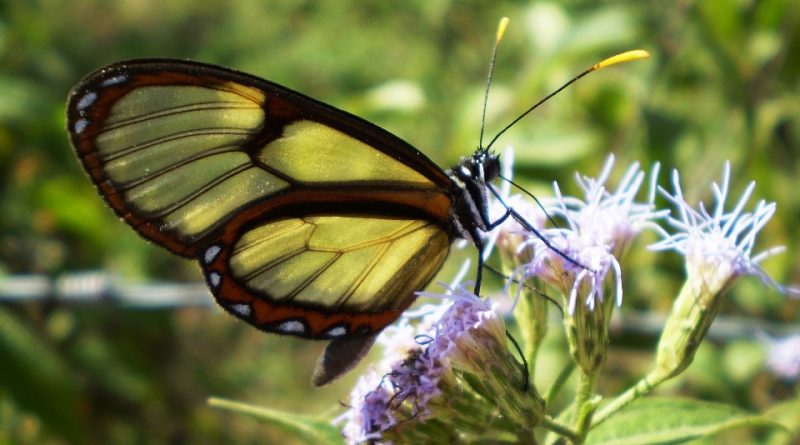 The glass butterfly (Greta oto Geyer, 1837) is a moth belonging to the Nymphalidae family.

Geographical Distribution and Habitat –
The glass butterfly lives in a range from Central to South America to southern Chile, with appearances to the north such as Mexico and Texas.
Its preferred habitat is that of the tropical climates of the rain forests found in the countries of Central and South America.

Morphology –
The Greta oto is recognized for its transparent wings which make it difficult to detect and follow for predatory birds. The wings have dark brown opaque edges sometimes with red or orange streaks. The wingspan is between 5.6 and 6.1 cm.
Caterpillars have green bodies with bright purple and red stripes. They are found on host plants of the genus Cestrum, which they feed on, where the eggs were previously laid.
The caterpillars are cylindrical in shape with smooth dorsal protrusions with filaments. These properties make them extremely reflective and therefore essentially invisible to predators.
The pupae are silver in color. During the fifth phase they produce a silk disk on the lower surface of the leaves through four rotating movements, to which it attaches. Silk fibers are important in providing greater flexibility to the attack of the pupa. The pupa attaches itself to this silk pad with a series of lateral movements of the posterior abdomen. The failure of the Pupa attack occurs when the silk pad breaks. In addition, the researchers found that the attachment of the pupa has a high tensile strength and toughness, which prevents the pupa from being pulled by predators or breaking due to the wind, allowing it to swing safely.

Aptitude and biological cycle –
The caterpillars of the glass butterfly feed, as mentioned, on the poisonous plants of the genus Cestrum; Experimental studies have shown that when the larvae use other host plants, they often die in the first stage of metamorphosis or develop more slowly. Caterpillars feed on these toxic plants and are perhaps toxic to predators through secondary chemicals stored in their tissues. For example, the chemical extracts of the caterpillar are unpleasant to the ants of Paraponera clavata.
In the adult stage, butterflies feed mainly on the nectar of flowers of the genus Lantana, which includes 150 species of perennial plants. They also feed on flowers of the Asteraceae and Boraginaceae families and on the excrements of insectivorous birds, absorbing the amino acids which are subsequently converted into proteins. Adult butterflies are also toxic due to males consuming Asteraceae flowers whose nectar contains pyrrolizidine alkaloids.
In this genus of butterflies the males try to mate with more females per reproductive season.
In order to attract females, males form large gatherings where they compete for mating. Aggregations are formed in shady areas of the rainforest and perform competitively to attract companions.
Adult males release pheromones to attract females. The pheromones produced are derived from the pyrrolizidine alkaloids that butterflies obtain through the feeding of plants of the Asteraceae family. The alkaloids are then converted into pheromones through the formation of a pyrrolic ring, followed by ester cleavage and oxidation.

Ecological role –
Although the wings of the Greta oto seem delicate, this butterfly is capable of carrying up to 40 times its own weight. In addition, this butterfly is known for its long migrations.
In its migrations it moves up to about 19 km per day at speeds of up to 13 km per hour.
The butterfly migrates to change altitude and this migration causes population density differences in different geographic areas.
This butterfly is preyed on by some birds. The Greta oto fights predators through toxins metabolized with the feeding of plants of the genus Cestrum and Asteraceae. The consumption of toxins gives the butterfly a disgusting flavor that discourages predators.
In addition, this butterfly uses its transparency to hide from predators by camouflaging itself in the background during the flight. Note that transparency is a rare feature among Lepidoptera, as they most commonly use mimicry to ward off predators.
To prevent a worrying decrease in this butterfly, some protective measures are being implemented. In some parks work is being done on conservation measures. These include: Guanacaste National Park, Rincón de la Vieja National Park, Monteverde Cloud Forest Reserve, Palo Verde National Park, Carara National Park, Poás Volcano National Park, Selva Nature Reserve and Biological Station, Juan Castro Blanco National Park , Irazú Volcano National Park, Chirripó National Park and La Amistad International Park.