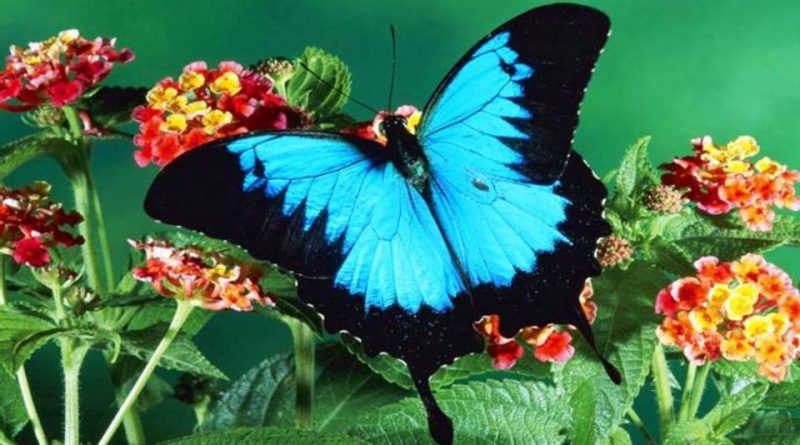 The Ulysses butterfly (Papilio ulysses Linnaeus, 1758) is a large moth belonging to the Papilionidae family.

Geographical Distribution and Habitat –
The Ulysses butterfly is a large moth that lives in the territories of northeastern Australia (eastern Queensland) and is also found in New Guinea, the Moluccas, the Bismarck Archipelago and the northwestern Solomon Islands.
Its habitat is that of the areas of the tropical rain forest and in suburban gardens.

Morphology –
Papilio ulysses has a wingspan of around 14 cm which, depending on the subspecies, has some size variations (with the western subspecies being larger).
It is recognized in that the upper part of the wings is of an iridescent electric blue color; the lower part is of a more attenuated black and brown color. The colors are produced by the microscopic structure of the scales, a phenomenon called structural coloring.
The female of the species is different from the male in that it has small blue crescents in the back, raised sections of its hindquarters, where there is only black for the males. When the butterfly is perched, the intense blue of its wings is hidden by the lighter brown under the side of its wings, helping it to blend in with the surrounding environment. During the flight, the butterfly can be seen hundreds of meters away due to the sudden bright blue flashes. Males are strongly attracted to the blue color, including blue objects which are sometimes mistaken for females.

Aptitude and biological cycle –
Papilio ulysses is a butterfly that in the past had been threatened by the erosion of its habitat and the plants it feeds on.
The reduction in the number of Euodia trees (Melicope rubra Lauterb. & K. Schum. TG Hartley 2001) which is a tree heavily used to lay eggs and for leaves eaten by caterpillars, can threaten the survival of this butterfly. Females generally prefer small trees up to 2 meters high for laying eggs.
The caterpillars emerge from the eggs and feed on these plants.

Ecological role –
The Ulysses butterfly is a moth strongly linked to its habitat and the presence of its food plants.
According to the IUCN, even if this plant is not currently threatened, it is still important to maintain its habitat.
In Australia this butterfly is used as an emblem for Queensland tourism.