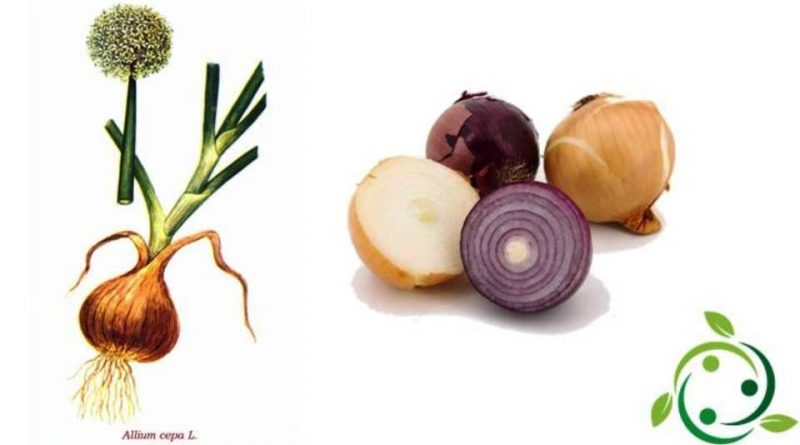 The onion (Allium cepa L.) is a herbaceous, bulbous and biennial plant, with superficial roots, with leaves that swell in the basal portion giving the edible part.

Origins and History –
Onion is one of the oldest vegetables among those consumed by man. Originally from the Asian continent, between Iran and Afghanistan, it enjoyed a great reputation already among the Egyptians.
Onion bulbs and other plants in the family seem to have been used as food since ancient times. Onions in the Bronze Age settlements, along with fig seeds and date kernels dating back to 5000 BC, remains of onions were found, but it is not clear whether they were actually cultivated at that time. Archaeological and literary evidence suggests that cultivation may have started about two thousand years later, in Egypt, together with garlic and leek. It seems that onions and radishes were part of the diet of the workers who built the pyramids.
Onion is propagated, transported and stored easily. The ancient Egyptians made it an object of worship, associating its spherical shape and its concentric rings with eternal life. The use of onions in burials is demonstrated by the remains of bulbs found in the orbits of Ramesses II. The Egyptians believed that the strong aroma of onions could give breath back to the dead.
For this reason it was represented in the frescoes of the tombs of the pharaohs and was revered as a divinity, to be called to testify to oaths or to put in the hands of the deceased which pass for the afterlife.
Administered by Alexander the Great to his troops to increase its value, it was placed under the dominion of Mars and introduced to Europe by the Greeks. In classical times, the onions were classified according to the areas of origin and those of the Greek city of Megara are said to be particularly renowned.
In ancient Greece, athletes ate large quantities of onions, as they were believed to lighten the blood. Roman gladiators rubbed their bodies with onions to firm up their muscles.
Discoride indicated that the white variety was more suitable as a food, while the red one as a medicine. Galen also espoused the same thesis, considering the red color an indication of a more intense curative efficacy.
Onions were recognized to have the virtues of stimulating the digestive system, solving retention problems and improving circulation.
In the Middle Ages these vegetables represented a food in common use, and although most of the ancient doctors had not attributed particular stimulating qualities, during the fifteenth and sixteenth centuries they acquired great fame as an aphrodisiac food with the property of growing and decreasing inverse of the moon phases.
So much was the food importance of onions that, in the Middle Ages, were used to pay rents and as gifts. Doctors prescribed onions to relieve headaches, to treat snake bites and hair loss.
Its juice was used to soothe coughs and heal bronchitis. In the case of insect bites, warts, boils, abscesses or burns, action was taken by applying a few slices of raw onion over the affected part.
Like other products of the earth, the vegetable was also subject to symbolic interpretations and superstitions.
In biblical exegesis he identified the pain produced by sin (irritated the eyes) and falsehood (many layers of its envelope).
According to popular beliefs, its skin was indicated in predicting the weather (thin skin, mild winter – large skin, hard and cold season).
During the modern era, in addition to finding widespread consumption in numerous recipes of different social classes.
The onion was introduced to Central America by Christopher Columbus on his 1493 trip to Haiti but in the north it was already known, Chicago means “Field of Onions” in the Algonquian language. In the 16th century, onions were also prescribed as a cure for infertility, not only in women, but also in pets.
Today it is perhaps the most cultivated vegetable plant in Italy, both for its organoleptic qualities and for the high content of salts, vitamins and antibiotic principles. Onions there are many varieties with various shapes and colors, but the most substantial differences are related to the area of ​​origin and the time of harvest.

Description –
Onion is a herbaceous plant, the bulbous part of which lives underground and is made up of modified leaves, which have an epidermis (protection). It is a biennial herbaceous plant whose life cycle, in cultivation, is interrupted for one year in order to be destined for consumption. It forms a long floral stem that bears an umbrella inflorescence with yellowish-white flowers.
The fruit is a capsule.

Active principles –
Onions are rich in vitamins and minerals. The characteristic smell of the cut bulbs is due to the abundance of sulphoxides.
When sliced, the onions cause the eyes to water because – after cutting – a precursor present in the cytoplasm and derived from the amino acid cysteine, the 1-propenyl L-cysteine ​​sulfoxide or 1-PRENSCO (the main sulphoxide of the onion), combines with allinase, an enzyme released from the vacuole; the combination of these two substances catalyzes a chemical reaction that leads to the production of ammonia, pyruvic acid and sulfuric acids including 1-propenylsulphenic acid. The 1-propenylsulphenic acid, if captured by a second enzyme known as Factor-Lacrimogeno Synthase, produces syn-propanetial-S-oxide, a volatile and water-soluble gas, which represents to all effects the tear factor since, coming into contact with the tear film containing water and physiologically present on the eyeball turns into sulfuric acid, a notoriously irritating compound.
Contact with sulfuric acid causes an immediate defense reaction by the eye, which consists precisely in the production of tears; however, the greater quantity of aqueous secretion on the eye only transforms a greater quantity of propylene oxide into sulfuric acid, in a chain reaction.
It is precisely to reduce the quantity of released tear factor that one of the solutions adopted to cut onions without tearing consists in doing it under running water: the compound is very water soluble so that its volatility decreases.
100 g of raw onion contain on average:
– edible part 83%;
– energy 26 kcal;
– water 92.1 g;
– 1.0 g protein;
– lipids 0.1 g;
– carbohydrates 5.7 g;
– starch 0 g;
– soluble sugars 5.7 g;
– dietary fiber 1.0 g;
– sodium 10 mg;
– potassium 140 mg;
– iron 0.4 mg;
– calcium 25 mg;
– phosphorus 35 mg;
– vitamin B1 (thiamine) 0.02 mg;
– vitamin B2 (riboflavin) 0.03 mg;
– vitamin PP (niacin) 0.50 mg;
– vitamin A (equivalent retinol) 3 µg;
– vitamin C 5 mg.

Properties and Uses –
The main use of the onion is for food and seasoning, but it is also used for therapeutic purposes for the properties that science and the traditions of folk medicine recognize.
There are many varieties of onions that differ in color, size and shape of the bulbs, period of maturation and collection. Among the many varieties: the Bianca di Maggio, large and flattened, the Bianca tonda di Chioggia, the Valenciana, the coppery of Milan with reddish and top-shaped skin, the «golden yellow of Parma» with slightly flattened spherical bulbs, the Rossa Tropea (all onions that are kept for a long time).
Among the small onions, also suitable for pickling: the Precoce di Barletta and the Giallognola di Como (their bulbs do not exceed 3 cm in diameter). Finally there is the whole variety of spring onions, which are harvested when incomplete and have small, slightly ovalized bulbs, which continue in long hollow green leaves.
Onion is one of the most used flavors in cooking in all countries. Its particular taste gives the preparations that flavor that enhances the other ingredients used in the various dishes of national and international cuisine.
It would be very long to list all the preparations that use it, but you can remember, for example, the peperonata, the onion omelette and among the international dishes the soupe à l’oignon (the French onion soup). Very popular, especially in the United States of America, is the onion rings (onion rings, in American cuisine), in which the onion is fried after being dipped in batter. Onions are usually cut into rings forming circles which give it the common name, in English, of onion rings. They are often served in fast food boxes in paper trays, like common French fries. A typical preparation of Palermo cuisine, in which the onion is used as a condiment, is the pizza called sfincione.
In its raw form, onion is used in salads, especially with tomatoes or beans, and is widely used especially in summer.
It is one of the 3 main smells, together with celery and carrot, used for vegetable broth.
In Catalonia it is customary to taste onion sprouts in the calzotata.
In the field of medicine too, onion is important for its diuretic properties. It is also used as the active principle of some healing creams; is able to significantly decrease the thickness of scars caused by stretch marks. Onion contains sulfur compounds (antibiotic properties) and chromium, which help to contain blood sugar and blood cholesterol and triglyceride levels, to prevent atherosclerosis and heart disease. It also contains numerous flavonoids, including quercetin, which seem to have anticancer effects, and compounds with anti-inflammatory properties.
Beware of those suffering from gastric disorders: they could be irritating.

Preparations –
The use of onions in the kitchen is very wide which would require a separate treatise. These vegetables are often indispensable in the sauté, excellent boiled and simply seasoned with oil and vinegar, stuffed and cooked in the oven, used raw in salads, fried, glazed in a pan, added in the stews of meat.
As far as the purchase is concerned, care must be taken that they are firm and compact, free of stains and with a slightly crispy skin (in yellow or red onions) or shiny (in white ones).
For storage it is advisable to do it in a cool, dry and dark place, avoiding to keep them in the fridge: they would mold and smell.
As mentioned, to avoid tearing during cutting, just keep them immersed, during peeling, in a basin full of water. Or keep them in the freezer for 10 minutes and, while cleaning them, wet the knife often: you will avoid watering.
For a quick guide in the kitchen we recommend the use:
– raw for red onions (sweeter);
– cooked for the white ones;
– pickled for onions, ideal to accompany boiled or appetizers.