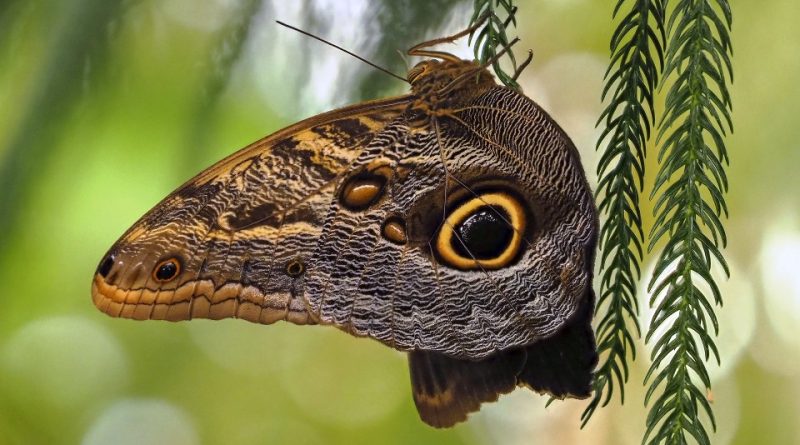 The Giant owl (Caligo memnon C. & R. Felder, 1867) is a moth belonging to the Nymphalidae family.

Geographical Distribution and Habitat –
The Giant owl is a species that lives in the rain forests and in the secondary forests that go from Mexico to the Amazon rain forest but also present in South America up to Argentina.

Morphology –
The Caligo memnon is a butterfly whose adults have a wingspan generally between 115 and 130 mm, but which can also reach 150 mm.
The wings are mottled in light brown and brown, with alternating colors and the presence of a spot similar to a dark brown eye per wing.
This ocellar spot, which simulates the eye of an owl, known and feared nocturnal bird of prey, carries out the task of keeping any predators away.

Aptitude and biological cycle –
The larvae of the Caligo memnon feed mainly on species such as Musa and Heliconia and can represent a problem in areas where bananas are grown. Adults instead feed on the liquids and decomposing substances of fruits of the areas where they live.

Ecological role –
The Giant owl is a moth with twilight habits, so it is possible to see them fly either in the early morning or in the evening.
Their presence is mainly determined by the presence of plants of the genus Musa and Heliconia.