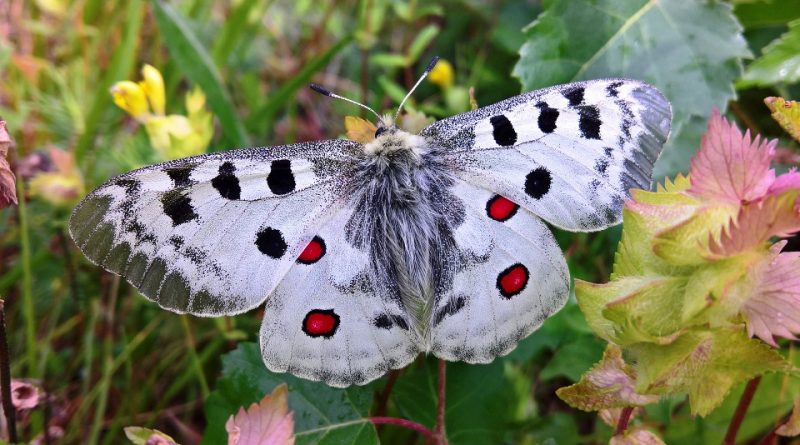 The Apollo butterfly (Parnassius apollo Linnaeus, 1758) is a moth belonging to the Papilionidae family.

Geographical Distribution and Habitat –
The Apollo butterfly is a lepidopteran that occupies a somewhat discontinuous range and that includes the high altitude regions of continental Europe including: Spain, Scandinavia, central Europe, in the Balkans up to northern Greece and in the Alps between Italy and France.
In Italy it is quite common in the Alps and more sporadic in the Apennines, especially in the Tuscan-Emilian Apennines and in Umbria, but in these areas it is still in great decline. It is also found in northern Sicily and Aspromonte, while it has presumably disappeared in Sila.
It is also present in some areas of Central Asia (Sakha).
This species requires specific climatic conditions (cold winter, sunny summer), as well as open spaces (with a shrub cover of less than 5%) and a large surface of meadows (at least 50%). The presence of the host plant for caterpillars is fundamental.
In addition, its habitat is characterized by high altitude areas where it prefers flowery meadows and valleys, but also rocky slopes. Like other species of its genus, it is vulnerable for isolation after the last ice age, but in places where it is present it is quite common. Typical butterfly of high altitudes, it is present from 400 to 2500 meters, although it is far more present above 1000 meters.

Morphology –
The Apollo butterfly has a wingspan between 50 and 80 mm and is recognized for its white livery and wings dotted with small black spots in the front area and two or larger red, circular and black-edged spots, while the ends of the front wings are often transparent, especially in the female.
Compared to the Parnassius phoebus, with which it is somewhat similar, it stands out above all for the white inside the red spots and for the very white background color with several small black spots, but in some variations these particularities are also present in the Phoebus, so to make sure It is always better to check the antennal funiculus which in the apollo butterfly is very light white-gray striped and ends with a black club, while in the Phoebus the stripes and are white and black.
The caterpillars of this butterfly have a velvety black blue coloring with small orange spots.

Aptitude and biological cycle –
The Parnassius apollo is a butterfly that has only one annual generation, being able to observe it from May to September, with variations depending on the location and temperature.
During mating, the males deposit a gelatinous secretion on the abdomen of the female which prevents the female from mating a second time.
The females lay their eggs during the winter and hatch in the spring the following year.
The deposition takes place on trunks, dry plants or on leaves of evergreen plants near the plants on which caterpillars feed.
These feed mainly on plants of the genus Sedum, mostly Sedum album but also, more rarely, Sedum telephium, Sedum rosum, Sedum annuum, Sedum villosum, and then Sempervivum tectorum and Rhodiola rosea.
The caterpillar prefers to feed in the sun and gets stuck between stones or moss.

Ecological role –
The adult Apollo butterflies can be seen flying, as mentioned, in the period between May to September, a period in which they feed on flower nectar.
The caterpillars feed on species of the genus Sedum, mainly Sedum telephium, Sedum album, Sedum rupestre and Sedum ropsea and also Hylotelephium caucasicum and others.
The Parnassius apollo is a butterfly indicated on the red list of threatened species, in CITES Appendix II and is mentioned in Annex IV of the Habitats Directive.
The main threats to which this butterfly is subject are not perfectly known but as for other species it could be related to the fragmentation of habitats and some forms of pollution.
In some cases, in some habitats, reforestation must be avoided and the collecting that has generated a particular hunt for this butterfly must be avoided.