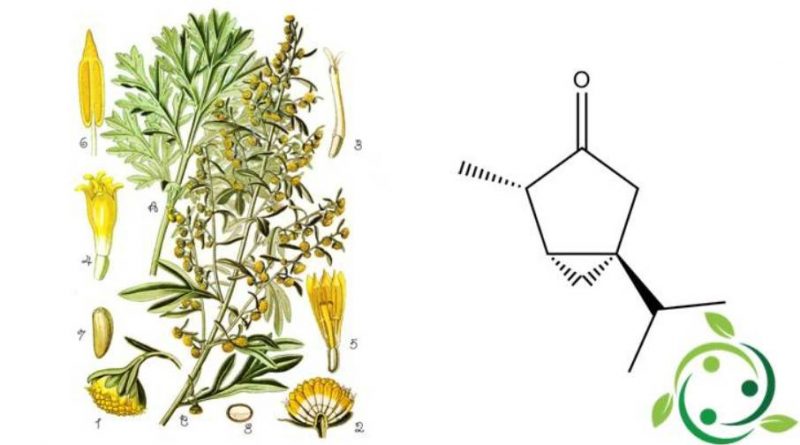 The thujone or absintol, whose term in the official IUPAC nomenclature is: 4R-methyl-1S-propan-2-il-5R-bicycle [3.1.0] hexan-3-one is a ketone and a terpenoid that exists in two forms stereoisomere: (+) – 3-tujone or α-tujone and (-) – 3-tujone or β-tujone.tujone.
Thujone has a brute or molecular formula: C10H16O and has a menthol smell.
This compound is found in many species of absinthe in modest quantities and in tansy; it is also found in traces also in sage, hyssop and other plants.
In particular, absinthe is traditionally known to all for its distinctly bitter characteristics and for the widespread belief that its preparations are toxic. In its essential oil, as mentioned, thujone is present, which at high doses can cause serious disturbances; however, containing the consumption to the real needs and not exceeding the indicated doses, the absinthe preparations can be used with good safety and efficacy; avoid consuming Absinthe-based liqueurs as much as they would be particularly rich in thujone and therefore harmful to health.
In folk medicine, absinthe has been used in the treatment of dyspeptic symptoms, as well as as eupeptic (substance with an intense bitter taste that promotes digestion) and carminative (substance that favors the elimination of gas from the stomach and intestines). Absinthe also has antimicrobial properties. In addition, in a recent study, the ability of essential oil to inhibit the growth of Candida albicans and Saccharomyces cerevisiae was observed.
Among the biological effects caused by thujone it is shown that this substance is porphyrogenic (causes an accumulation of protoporphyrin) and can cause porphyria.

Terpene-induced accumulation of porphyrin is further stimulated by the simultaneous administration of desferoxamine, a chelator for iron that inhibits the biosynthesis of the heme and mimics the blockage that occurs in cases of acute porphyria. From these studies, therefore, it appears that the administration of thujone can be dangerous in patients with hepatic biosynthesis in the liver.
The neurotoxicity of thujone has been associated with its ability to block the γ-aminobutyric acid (GABA) receptors in the brain and, in particular, a study by Hold et al. has shown that thujone acts as a GABAA receptor antagonist.
The reduction of the gabaergic activity produced by the thujone contained in the absinthe seems to favor the onset of abnormal neuronal electric discharges, responsible for the clinical manifestations of the comitial type; it has also been hypothesized that the pro-convulsive activity of α-thujone may also be related to a reduction in the response of the 5-HT3 receptor for serotonin.
Among other effects related to thujone, it should be remembered that this substance has a slight affinity for cannabinoid receptors without however inducing cannabis-mimetic effects. The appearance of toxic effects is however linked to the concentration.