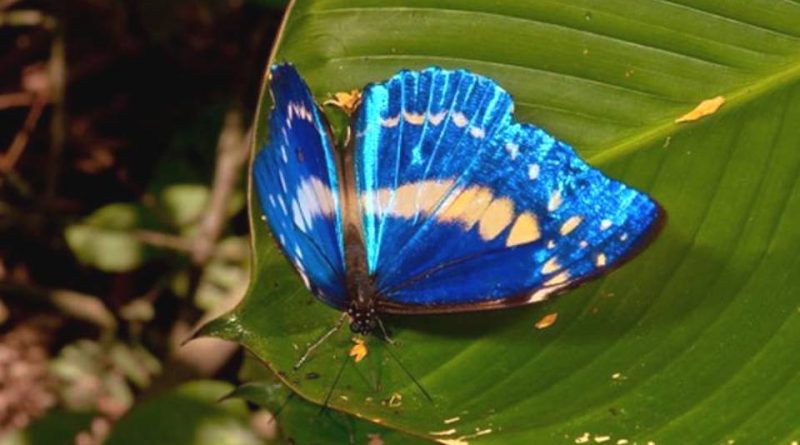 Geographical Distribution and Habitat –
The Morpho cypris is a neotropical butterfly that we find in Panama, Costa Rica, Nicaragua, Colombia, Venezuela, Trinidad and Tobago and Ecuador and where it is present with different subspecies and forms.
This butterfly is native to Central and South America and has a mostly Andean distribution.
Most of the northern population is represented by the nominal subspecies Morpho cypris that populates Nicaragua while the subspecies M. cypris cypris lives in Colombia.
This butterfly is most frequently encountered along rivers, such as rivers and streams that run through the jungle.
There are five recognized subspecies and perhaps a sixth subspecies along the border between Venezuela and Colombia. Although male specimens of this butterfly are common in collections, female specimens are rare.

Morphology –
The Morpho cypris is a butterfly that stands out for the incredible beauty of the livery of the wings.
The butterfly can be recognized by a wingspan of 9.5-11 cm, with a predominantly shining blue-blue coloring, with a purity and a shine so intense that all the other colors appear faded or, in comparison, opaque; there are middle spots, almost forming a band of color varying from light to yellow ocher, with lower fringing of the wings, more or less present, also according to the different subspecies.
The females have a large size, with a large abdomen and the wings have black or brown margins of prominent width with opaque colors that make their visualization difficult. In contrast, males have a highly exempt and iridescent blue coloration.

Aptitude and biological cycle –
The biology of this butterfly is still to be studied in depth, also depending on where it lives it reproduces in areas where the species it feeds on are present. in Costa Rica it is found for example on a legume (Inga marginata Willd.)

Ecological role –
The males of this species are quite warlike and spend their time chasing most of the large butterflies (including Papilionidae, Nymphaeums and other Morpho species) that invade the territory. Males spend most of the late morning and afternoon patrolling their territory in search of females, although little is known about adult behavior. Like other members of the genus, adults do not visit flowers, but seem to prefer fermenting substances, fruit and sugary sap.
It is assumed that most of their feeding occurs in the upper part of the vegetation since they are rarely caught in traps with baits.
As mentioned, some subspecies are distinguished within this species; among these we remember:
– Morpho cypris cypris Westwood, 1851, which lives in the mountainous regions of Central America (southern Nicaragua, Costa Rica, Panama), in southern North America (Colombia and perhaps in Ecuador and Venezuela);
– Morpho cypris aphrodite Le Moult & RJal, 1962, which is a rarer and limited subspecies to a few mountain areas in southern Nicaragua;
– Morpho cypris bugaba Staudinger, 1887, whose range is limited to some mountainous areas in the south-east of Costa Rica and in the north-east of Panama around the Chiriqui volcano;
– Morpho cypris chrysonicus Frühstorfer, 1913, subspecies present in western Venezuela and adjacent eastern Colombia;
– Morpho cypris lelargei Oberthür, 1921, present in western Colombia, along the slopes of the Pacific and, probably to the west coast of southern Panama;
– Morpho cypris schausi Rothschild, 1916, subspecies limited to some small areas along the central mountains of Costa Rica and southwards to Panama.
This moth is considered by many to be the most beautiful butterfly in the world.