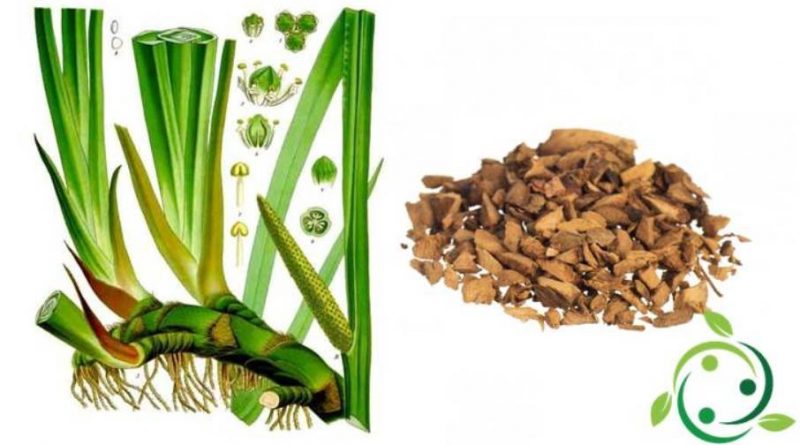 The Sweet flag (Acorus calamus L., 1753) whose roots and shoots are used both in cooking and for other uses.

Origins and History –
The Sweet flag is a plant native to India, but since ancient times it has been transported by traders and travelers throughout Asia and Europe, and where it has found temperate climate regions, which offered it the opportunity to take root , has taken root, thus spreading without particular difficulties.
Today it can be found in all the temperate climatic regions of the Northern Hemisphere.
We have news of the aromatic Calamus since Dioscorides, but like many properties attributed at the time, some are mythological. For Dioscorides the aromatic Calamus was a plant for the recovery of sight. This alleged property was narrated in a fairy tale that told of how a weasel lost his sight fighting against a basilisk, but later thanks to this plant, he bought it again.
The Durante was also deceived by this plant, which he considered useful in blocking the swarming of bees away from the hive.
Calamo became part of one of the most widespread applications for the prevention of the plague, in a famous aromatic vinegar called “the four thieves” vinegar. Unfortunately it was nothing more than a maceration in vinegar of several plants, almost all with the alleged property of curing from the plague. Among the ingredients are mentioned rosemary, absinthe, sage, rue, cinnamon and carnations.
In the Middle Ages the leaves, which smell of lemon, were scattered on the floors to perfume the environment by stepping on them.
In more modern times, but not too much, in Arabia and Iran it has been considered an aphrodisiac.
The only real common thread from ancient times to today is what sees this plant used as a spice instead of cinnamon.

Description –
The Sweet flag is a perennial, rooting hydrophyte plant, which can reach a maximum of one meter in height. It has sheathed, ensiform root leaves. The central rib determines a sort of longitudinal fold inwards along the entire length of the leaf itself.
The rhizome is horizontal and cylindrical, particularly gnarled and sprinkled with scars caused by the fall of the leaves and the pre-existing roots. Its color is brownish red on the outside and whitish – reddish on the inside, with a spongy texture, intense smell and bitter taste.
The floriferous scape is erect and triangular, surmounted by a spathe with a spike inflorescence, which in this case takes the name of spadix, whose color is yellow.
The resulting fruit is a capsule that contains two or three ovoid shaped seeds.
The roots and leaves are edible.

Active principles –
A volatile essential oil was extracted from the Calamo by distillation. The percentage obtained is one of the most variable, ranging from 0.2% of the leaves to 3.5% of the mix between leaves and root.
This oil contains: asarone, asaryl aldehyde (2,4,5-trimethoxybenzoic aldehyde), eugenol, terpenes (probably pinene), calamone or calamus camphor C15H26O2, palmitic and heptilic acids. In Russian drug oil a-pinene, camphene, camphor, a bicyclic sesquiterpene C15H24 (= calamene), a sesquiterpene alcohol calamenol or calamenol C15H24O, cineole have been found.
Kelkar and Rao in dry rhizome oil, originating in India (producing 2.8% of oil) found 82% of asarone, 5% of calamenol, 4% of calamene, 1% of calameone, 1% of methylugenol, 0 , 3% of eugenol, 0.2% of a-pinene and camphene and furthermore the palmitic and n-heptilic acids, asaronaldehyde and butyric ester (?) (The latter of which the percentage content is not given).
Other authors have isolated a compound of crude formula C12H16O3 which they called calamol and which they identified with an allyltrimethoxybenzene.
Still other authors, in a calamus oil of Germanic origin, obtained, calamene C15H24, consisting of a mixture of the bicyclic sesquiterpene a-calamene and the tricyclic sesquiterpene b-calamene: in addition calameone C15H26O2, a “calamene” ketone C15H26O, a compound of formula C15H24O called acoroxide, two sesquiterpene diketones isomers acorone and isoacorone C15H24O2. Furthermore terpenes, a terpene aldehyde, unidentified sesquiterpene alcohols, small quantities of d-camphor and b-elemene.
Other components present in the rhizome are: a bitter “acorin” substance of undefined chemical composition, choline, methylamine, sugar, tannin, vitamin B1 533.8 g% in dry rhizomes, resin and ash up to 6%.
The structure of several of the characteristic components of Calamo essential oil has so far not been definitively established. The C15H24 calamene was thus named and isolated from the rhizomes from Semmler and Spornitz. Studies by Ruzicka et al. Have found that it is a bicyclic sesquiterpene of the cadinene group, containing two ethylenic bonds. Not even Bòhme’s subsequent research has led to full knowledge of the structure of the calamene.
The other components found in the rhizome are tannins, which give the bitter note, together with the acorin glucoside, responsible for the cinnamon-like aroma. Ascorbic acid, palmitic acid, vitamin B1 and sugars close the composition of the substances present with higher percentages.

Properties and Uses –
The Sweet flag, also called acoro or Venus herb, whose roots and leaves are used.
The root is a large, gnarled branched aromatic horizontal rhizome, which is harvested in spring or autumn. It is then cut, dried in the shade and stored in canvas or paper bags. The drug you use comes from dried rhizomes.
This plant has anthelmintic, antiseptic, antispasmodic, aromatic, carminative, cholagogic, eupeptic-digestive, emmenagogic, febrifugal, stomachic and tonic properties.
The aromatic Calamus is indicated as a digestive stimulant, in dyspepsia and inappetence, in flautolence and in anorexia; it also combats biliary insufficiency and intoxication, gout and uricemia.
It is used for fever, neuralgia, neurasthenia, hypotension.
It has sedative properties and fights the manifestations of delirium and epilepsy.
Ayurvedic medicine, very widespread in India, where they have always known and used Calamus, uses it for the treatment of epilepsy and hysteria. Insomnia is treated by Ayurvedic doctors with a mixture of herbs, among which the main one is acory.
The roots of the aromatic Calamus are used for the preparation of liqueurs.
The essence is used in perfumery, but also for flavoring some drinks such as chinotto with vermouth.
Sprouts can be used to flavor salads, the root for meat dishes.
Among the contraindications it is recalled that it is not recommended in pregnancy.
Aromatic calamus has recently been discovered to contain beta-asarone, a molecule with mutagenic-carcinogenic activity. Therefore, the use of extracts and infusions of varieties containing this substance should be avoided and the American diploid variant must only be used, which does not have it. The varieties that should not be used are the tetraploid (Indian or subtropical), which contains up to 80% of beta-asarone, and the European triploid, containing up to 19% of the carcinogenic molecule.

Preparations –
The rhizome of the Sweet flag can also be found on the market in the form of dried pieces, such as licorice. They are tortuous, cylindrical, yellowish brown in color with blackish spots. On the surface there are large and dark V-shaped scars.
These dried rhizome pieces can be chewed directly, avoiding to swallow the fibrous remnant, or used for the preparation of decoctions or infusions, depending on the convenience and your preference.
Other forms available are those of the fluid extract and that of the capsules containing the powder.
The drug used is the rhizome. This is collected just before the appearance of the new leaves, when the concentration of the active ingredients in it is maximum.
Sometimes, to obtain a maximum return of essential oil, the leaves are also used, even if their contribution is negligible compared to that of the rhizome alone.
Having to use the rhizome, which must be at least two years old, better three, the plant will have to be sacrificed and uprooted. For this operation, which can also be easily performed by hand, given the superficiality of the rhizome, suitable mechanical means can also be used.
Once uprooted it must be cleared of the earth and the rootlets attached to it, as well as the stem of the plant itself. However, this operation must be done just before the rhizome is processed, or a good quantity of the essential oil collected in the cells will be lost from the cuts created.
The roots, as mentioned, are used in herbal medicine to prepare liqueurs, and its eupeptic-digestive properties are appreciated.
In the industrial sector, the essence is used both in perfumery and to give a vermouth aroma to drinks such as chinotto.
From a gastronomic point of view, sprouts can be used to flavor salads, while the root aromatizes meat dishes.