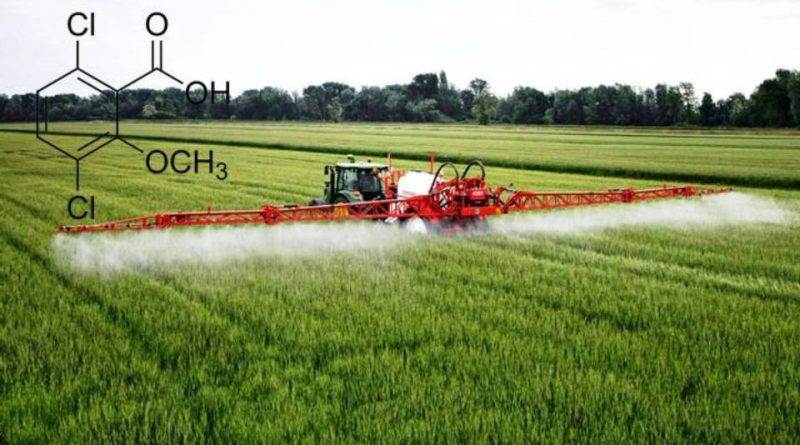 The issue of herbicides is now a real war between Planet Earth, with its living beings and its rules and multinationals, thirsting for ever greater gain and power. A face of the coin that goes, if ever it were needed, unmasked, since behind the reassuring slogans of these deformed monsters there are only interests of economic and therefore political predominance.
After the great quarrel, still unraveled, around the glyphosate, now it is the turn of another herbicide, in some ways much more dangerous: the Dicamba.
Dicamba, which in the official IUPAC nomenclature is 3,6-dichloro-2-methoxybenzoic acid, is a broad-spectrum herbicide first registered in 1967. Trademarks for the formulations of this herbicide include Dianat, Banvel, Diablo , Oracle and Vanquish.
Dicamba is a chlorinated derivative of o-anisic acid.
To be clear, the mechanism of action of Dicamba is that of contrasting annual and perennial broadleaf weeds.
Its main commercial applications are the control of weeds for cereals and meadows, as well as for legumes and other crops.
Dicamba works by increasing the growth rate of plants, enough to induce them, in sufficient concentrations, to overcome their nutrient reserves and die.
But the Dicamba soon went through a series of actions mainly because of its ability to drift, that is, its tendency to spread from the treated fields to nearby fields, causing even considerable damage.
In general, Dicamba is a more powerful herbicide than Glyphosate and moreover, as mentioned, it volatilises, spreading rapidly, with significant damage on crops and natural habitats.
Therefore, Dicamba is not only made more dangerous by the herbicide effect with the destruction of the microbial microflora of the soil, and therefore its fertility, but its volatility, being a substance that spreads rapidly, also affecting crops that are not able to resist.
Obviously, there is the risk that it can destroy ornamental species, vegetables, wild plants that act as habitats for animals and even the reproduction of a whole series of insects, including bees: a real killer of Nature and therefore of the Life.
The fears are certainly not unfounded, especially in light of the latest updates regarding the impact that its use may have on human health and the environment, so much so that it was soon defined much more dangerous than Glyphosate; That’s all to say.
Among other things, some farmers and researchers have expressed concern about the resistance to this herbicide after the introduction of resistant crops. In the laboratory, researchers demonstrated the resistance of Dicamba weeds within three generations of exposure.
Weeds, resistant to herbicides, were in fact born after the introduction of crops resistant to glyphosate (marketed as “Roundup Ready”).
Some weed species, such as Amaranthus palmeri, have developed resistance to Dicamba. Resistance to Dicamba has been discovered, e.g. in Bassia scoparia, which is an annual herb, in 1994 and has not been explained by common resistance methods such as absorption, translocation or metabolism.

A picture in itself already worrying enough. But that’s not all, as usual are the joint effects on habitats and on humans (who need habitats) to cause worse worries than the use of an atomic bomb.
Leaving aside therefore the aspects of the resistances and the drifts, per se catastrophic, it is obvious that those instead linked to the effects on human health add to the scenario an exponential question of unequivocal importance.
Thus Bayer and BASF risk being overwhelmed by a new wave of lawsuits. Already committed to the Roundup and PCB contamination front, the German multinational faces a siege that could cost them very dearly.
At the heart of these new causes is Dicamba, a herbicide “inherited” from Monsanto and believed to be responsible for the destruction of various crops.
So after the Roundup and PCB front, the one linked to the harmfulness of the Dicamba opens.
By the way, in the U.S., some states have banned its use, such as Arkansas and Missouri which banned the sale and use of Dicamba in July 2017 in response to crop damage claims due to drift.
The bomb, more recent, on Dicamba, now moves on its carcinogenicity.
At this point, however, it is necessary to clarify this aspect once and for all.
As usual, to demonstrate the carcinogenicity of a substance towards the human species, a very complex scientific protocol is required, which provides for peer review, better known with the English term peer review; that is, the procedure for selecting articles or research projects proposed by members of the scientific community carried out through an evaluation of specialists in the sector who verify their suitability for scientific publication in specialized journals.
Here, of course, as we say, the donkey falls, as the complexity of this procedural verification is compounded by the difficulty (which is the real gangrene of modern society) in finding huge public funding sources for these researches, with the result that for decades the data found lie in a limbo in which, needless to say, it is the multinationals that give their definitive “scientific” sentences with their “humanitarian” research.
The question at this point is: but what happened to all the Precautionary Principles, including that of the European Union, enshrined in Article 191 of the Treaty on the Functioning of the European Union. Recall that its purpose has been and is to guarantee a high level of environmental protection thanks to preventive stances in the event of risk.
Among other things, in practice, the scope of the principle is much wider and also extends to consumer policy, European food legislation, human, animal and plant health.
Furthermore, the Precautionary Principle has been recognized by various international conventions and is particularly included in the Agreement on sanitary and phytosanitary measures (SPS) concluded in the framework of the World Trade Organization (WTO).
The conclusion is: beyond their real agronomic advantage and their danger to habitats, why do you continue to use these molecules without having undergone peer review procedures for years before putting them on the market?
Of course, the veracity of science, technology and truth about these is not only at stake here, but the democratic procedures that have dangerously moved away from individual sovereign states.