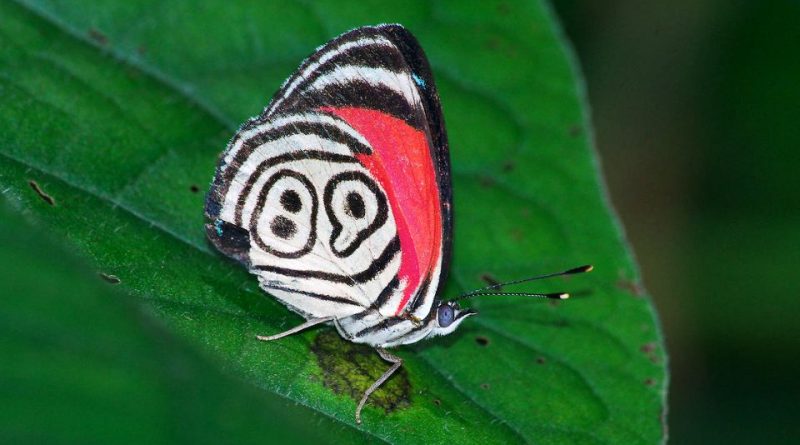 The Cramer’s eighty-eight (Diaethria clymena Cramer, 1775) is a moth belonging to the Nymphalidae family.

Geographical Distribution and Habitat –
Diaethria clymena is a butterfly whose presence is limited to central and southern America, such as Mexico, the Amazon and the Andes. Butterflies often frequent human dwellings and are considered a sign of good luck by some communities.
Its habitat is that of the rainforest where the larval Trema (Ulmaceae) food plants grow at altitudes between the sea level and about 2000 m above sea level.

Morphology –
The Cramer’s eighty-eight is a butterfly with a wingspan of approximately 30–40 millimeters.
The adults are black with a blue band on each wing. In some species this color is repeated on the hind limbs in the form of a submarginal band.
The lower part is red and white with black stripes that look like a number outlined as “88”, “89” or “98”.
This butterfly has a rather variable appearance: in some examples the black marks on the lower side are thicker and in several subspecies the black marks 89 are confluent with the innermost black submarginal line. The white background color of the hind wings often becomes dirty and brownish on older specimens.
The larvae are green in color, with a slightly rough texture and carry a couple of short pointed segments on the anal part. The head carries a pair of very long spiral spines.
The larvae usually rest on the upper surface of a leaf, with the thoracic segments raised and the head facing the substrate, making the thorns protrude upwards. If they are harassed they contract violently, swinging their heads defensively from one side to the other to frighten predators or parasitoids.
The chrysalis live suspended from a leaf or stem, they are green in color, with a dorsal keel and protruding palps.

Aptitude and biological cycle –
Diaethria clymena lays whitish and highly sculpted eggs, singularly close to the central part of the lower side of the leaves of the Trema plants (Ulmaceae).
Once emerged, the larvae feed on Trema lamarckiana, Trema micrantha and Theobroma.
Both sexes are attracted to rotting fruit. Males are strongly attracted to the sand soaked in urine and also absorb minerals dissolved in moist soil, road surfaces and rocky walls. They are very active butterflies, which if disturbed go away immediately; moreover, they rarely settle for more than a few seconds at a time, but they will repeatedly return to the same piece of land.

Ecological role –
Diaethria clymena is a butterfly, which with its 13 subspecies lives in Mexico, Peru and Brazil. It was discovered by Pieter Cramer in 1775.
It is a butterfly whose individuals live in small groups of two or three, but sometimes they gather in large numbers where conditions are optimal.
They are commonly found near homes, e.g. on the banks of the river near the piers, in the places where the laundry is washed, in the soils covered in ash after fires, and in the patches of bare soil contaminated by urine.
When not feeding, the males perch on the upper surface of the leaves at a height of about 2-3 m, waiting to mate with the females. They are also commonly laid upside down on walls or tree trunks.
Just before sunset, the males can often be observed with their wings almost fully extended, on the foliage of trees and bushes, before retiring under a leaf where they spend the night, to protect themselves from the rain.