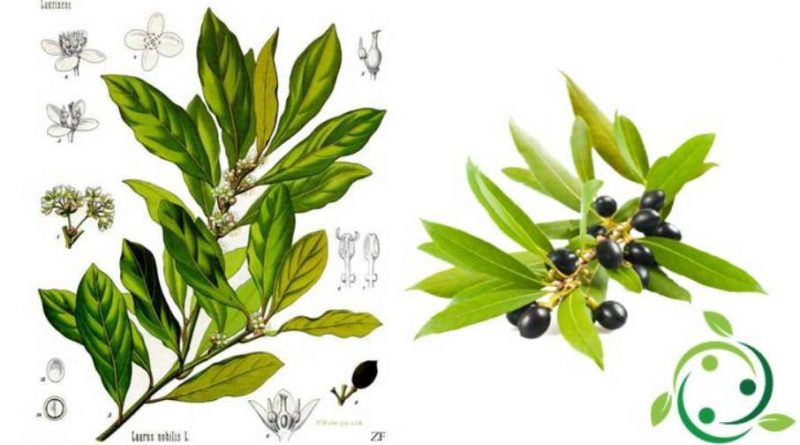 Laurel (Laurus nobilis L., 1753) is an aromatic arboreal species and officinal plant used since historical times for its multiplicity of properties.

Origins and History –
Laurel, or laurel, belongs to the group of those plants to which, since mythology, traditions and beliefs have been linked.
In Greco-Roman mythology the laurel was a sacred plant and symbolized wisdom and glory: a laurel wreath encircled the forehead of the winners in the Pythic or Delphic Games and constituted the highest honor for a poet who became a graduate poet. Hence the figurative meaning of a symbol of victory, fame, triumph and honor. In addition, this plant was sacred to Apollo since Daphne, the nymph with whom the god fell in love, asked that the cause of Apollo’s encroachment on him be eliminated, and therefore the human aspect was removed by being transformed into Laurel. Apollo then placed the Laurel plant in his garden and vowed to wear it on his head in the form of crowns forever, and said that the Romans did the same during the parades on the Capitol. In fact, it would have been Apollo who made this tree evergreen.
The god also established, girding his head with wreaths made of laurel branches, that all mortals who distinguished themselves by heroic deeds could have done the same. So it was that in the first Olympics of 776 BC. the winners were crowned with a laurel.
The “laurel” is often mentioned in Petrarch’s Canzoniere. In the work, in fact, Laura, (also homophonic game that the poet creates is functional in this metaphor), the woman he loves lyrical ego, is partly assimilated to this shrub (emblematic of the six numbers “Giovene woman under a green laurel “). Taking the images of Greek mythology (in particular the myth of Daphne and Apollo), the laurel is a symbol of rejection and inaccessibility, characteristics of Laura. The “bay” is a symbol of wisdom and glory (in ancient poets obtained the honor poetic through a laurel crown placed above the forehead, becoming “graduates”). Interesting is the play on words conceived by the poet: he realizes the combination on one side between “lauro-l’auro” (where “auro” means “gold” and refers to the typical shine of the woman, in particular to its foliage); while the couple Laura-l’aura (= air) also appears, as happens in sonnet 90 They were the golden leaders with the scattered aura.
According to ancient beliefs, the power of divination was also associated with laurel (Apollo was in fact also the god of the Vatican): the priestess of the god (the Pythia) used to chew bay leaves before prophesying. In popular tradition, however, introducing a bay leaf into the pillowcase makes the dream of that night come true.
Hon emperors and poets, laurel leaves and dried berries, come into the kitchen like aromatic components in a large number of sauces and gravies.
In Roman times, as mentioned, laurel wreaths encircled the chief of the chiefs, such as poets, consuls, men of letters, emperors, and still today the term “graduate”, with which those who complete a course of university studies are awarded, derives from this aromatic plant.
In Italy the tradition of placing a laurel wreath on the head of a student who graduated comes from this ancient custom.
In the Middle Ages, the botanist de ’Crescenzi recalled that bay leaves wrapped figs and placed themselves in jellies to perfume them, also stating that” with whatever they cook, its smell greatly increases comforting the stomach and brain “.

Description –
Laurel is a plant that presents itself, as it is often pruned, in the form of a shrub of various sizes but it is a real tree up to 10 m high, with thin and hairless branches that form a dense pyramidal crown.
The leaves are ovate, are dark green, leathery, shiny on the upper page and opaque on the lower one, they are also very fragrant and are used for various uses: in the kitchen, for flavoring meat and fish, as a home remedy to remove moths from wardrobes (excellent and more fragrant substitute for camphor), to prepare refreshing decoctions with digestive qualities or foot baths, or treated with alcohol to obtain a fragrant and aromatic liqueur with digestive, stimulating, antiseptic properties and is useful against coughs and bronchitis.
The fruits are shiny black drupe (when ripe) with a single seed. These berries ripen in October-November and are formed as a result of pollination is mainly entomophilous, or by insects.
From berries one can derive an aromatic oil, the laurel oil and with medicinal properties, peculiar ingredient of the ancient Aleppo soap. It was also used to preserve books and parchments and to prepare the classic laurel wreaths.

Active principles –
The bay leaves and especially the berries are rich in essential oils (from 3 to 10%), composed of pinene, fellandrene, geraniol, cineol, eugenol, terpineol, eucalyptol, lauric acid, tannins, acetic ether, butyric and valerianic, mucilage and many others.
Laurel is also rich in mineral salts (calcium, mangano, potassium, magnesium, iron, sodium and zinc), vitamins B1, B2, PP and C.

Properties and Uses –
Laurel is an evergreen shrub whose wood is aromatic and gives off the typical scent of the leaves.
In March, when laurel blooms, especially in cold temperate climates where there are no other relevant blooms, it is an important source of nectar and pollen for bees.
There are two varieties. Laurus nobilis var. aurea – the most common, with yellowish, oval-lanceolate, shiny and wavy leaves on the edge, and the Laurus nobilis var. angustifolia, with narrower and longer leaves. The second variety of laurel is known for its greater resistance to environmental adversity.
Today the laurel plant finds its use mainly in the kitchen, but in the past it was considered a medicine against migraine, gout, asthma, fever; its dry leaves were placed in the closets to keep the insects away, while the fresh ones were inserted between the pages of the books to prevent their yellowing.
In general, bay leaves, as well as caraway seeds, help digestion, fight stomach pain and lack of appetite.
Laurel tannins decrease blood sugar and act against diabetes.
Laurel infusion is used for dry cough and cold.
For external use, essential oil is used for friction against rheumatism, sprains and sprains.
The large field of application of laurel is digestive disorders and food poisoning. When the stomach seems unable to digest even a glass of water and the foods are stationed in the abdomen, fermenting and producing bloating, stomach pain, intoxication, headaches and a sense of exhaustion, an herbal tea is used.
Although it is mainly known as a digestive plant, laurel also has a remarkable expectorant and diaphoretic property, useful in all cases of fever, flu states and respiratory tract congestion to stimulate sweating and promote the expulsion of bronchial phlegm.
The bay leaves also contain an essential oil with remarkable antibiotic, antiparasitic, antiputrefactive, digestive, stimulant, antiseptic, sedative, hypotensive, sweating, stomachic, antirheumatic and expectorant properties, to always keep at hand.
With fresh bay berries, an oleolite with anti-inflammatory, muscle relaxant and pain relieving action is prepared, to be applied topically to combat rheumatic or muscle pain, various types of trauma, bruising and to facilitate the functional recovery of the joints after the casts. Laurel berry oil is also an excellent remedy to be applied to the skin to keep mosquitoes away. Applied to the hair before shampooing and left on for twenty minutes, it makes the hair stronger and shinier.
Finally, in the kitchen, the habit of using bay leaves to cook roasted and boiled is more ancient than our culinary tradition but the reason for this practice does not originate so much from the desire to improve the taste of meat, but from the medicinal qualities of the leaves. It is no coincidence that the Greeks and Romans already used them for its ability to counteract the degeneration of food: in an era in which there were no refrigerators and modern conservation techniques it was obviously important to make sure that the meats to be put on the table did not spoil and for this purpose it was recommended to wrap them in fresh bay leaves before and during cooking.

Preparations –
The dried bay leaves, richer in aromatic essences if harvested in the summer months, can be kept in a cool, well-ventilated, poorly lit environment and in the absence of humidity
Bay leaves and berries are used in the kitchen to flavor meat, game, fish, potatoes, especially tomato based sauces, pickled vegetables and pickles.
In the therapeutic field, laurel is used in the preparation of infusions and herbal teas.
The herbal tea can be prepared by pouring a teaspoon of dried bay leaves in a cup of water; let it rest for a few minutes, then filter and drink: its antifermentative, digestive and stimulating power clears the stomach, restores energy to the body and clears the mind.
In case of cough, fever and flu, a laurel infusion can be taken twice a day. To prepare it, place two or three chopped fresh bay leaves in a cup of boiling water, let sit for about six minutes, then filter and drink, sweetening it with a teaspoon of lemon honey.
To promote good digestion, you can pour five drops of bay laurel essential oil into an aromatic diffuser for rooms during main meals, or suck the aroma directly from the bottle.
Against heaviness in the stomach, digestive migraine or post-prandial sleepiness, five drops of bay laurel essential oil can be diluted in a spoonful of sweet almond oil and gently rubbing the solar plexus area and temples.
To disinfect the air in the room where you are staying, you can pour a few drops of laurel essential oil into an essence burner.
With laurel berries you can also prepare an oleolite.
To prepare the bay laurel oil, crush 40 g of fresh berries in a mortar, pour them into a hermetically sealed dark glass container, add 300 ml of olive oil until they are covered, close and place the jar close to a heat source, leaving it to rest for a month. Then keep the pot in a cool place and protected from sunlight, filtering a small amount at the time of use.