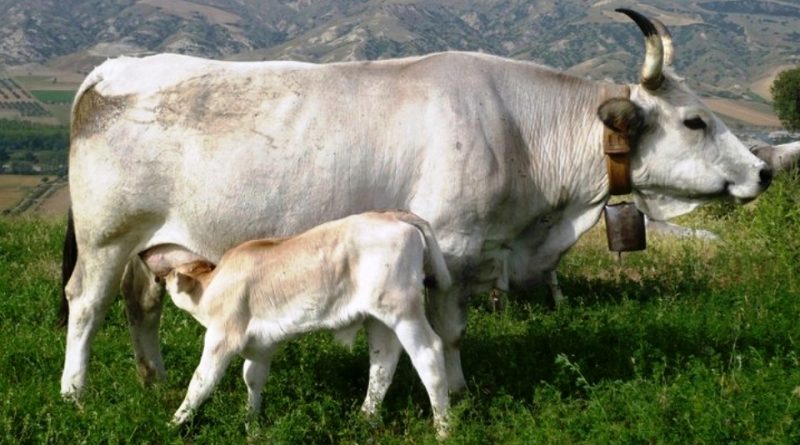 Podolica is a bovine breed (Bos taurus Linnaeus, 1758) bred in the southern areas of Italy with a prevalent productive attitude for the production of meat.

Geographical and Area Distribution –
Podolica is a bovine breed that is bred, especially in the southern Italian areas, namely: Abruzzo, Basilicata, Calabria, Campania, Molise and Puglia.
Today, in addition to being present only in the southern regions, moreover, it is widely mixed. If in 1983 a large number of pure specimens could be counted, today there are only 25 thousand animals registered in the breed’s genealogical book.

Origins and History –
The origin of the Podolica breed originates from the Asian East and which also maintains its original characteristics more.
The ancient Podolica breed has retained in its name the reference to the region, the steppes of Podolia (in Ukraine), from which it was imported: the latter seems to have been the work of the Huns in 452 AD. or the Romans, who would also have imported it to Crete.
According to other sources, however, it is believed that it has always been a bovine from the Italian peninsula.
The Podolica is a breed, which although not threatened with extinction, has undergone a significant decline, due to the mechanization of agriculture that has made shooting use obsolete, and to urbanization and exodus from rural and mountain areas. From an estimated consistency of 630,000 specimens from the Ethnographic Atlas of the bovine populations bred in Italy in 1983, the podolica population has experienced, according to FAO data from 2002, a decrease of 80%.
The National Association of Italian Cattle Breeders A.N.A.B.I.C. since 1966 he has been managing the genealogical books of the Italian white breeds (Chianina, Romagnola, Marchigiana, Maremmana, Podolica).

Morphology –
The Podolica is a breed that is recognized for having the gray coat with a tendency to dark gray on the neck, on the thigh, on the edge of the eye and ear in the male, while in the female it is lighter, up to white.
The calves, at birth and up to 4-6 months, are fromentino color.
The mucous membranes and the skin are black pigmented.
The claws (hard) are not black and are not as robust as in the Maremmana.
The horns are long, varying in size from 70 to 100 cm, with characteristics that are half-moon in males and lyre-shaped in females.
The average height at the withers is medium and the weights are not particularly high.

Productive attitude –
The cattle of the Podolica breed are bred for the production of meat and milk, used in the making of cheeses. In the past, the breed was also used to supply draft animals.
Meat is of good quality. It has an exceptional power of adaptation to difficult environments and an extraordinary ability to use food resources that could not be exploited otherwise (bushy pastures, stubble, spots, leaves of shrub essences, etc.). It needs very little human care. Even excessive milk production for calves (usually milked).
The amount of milk produced in short periods of the year is about 15 kg per day with a fat content of 4.50% and protein of 3.60%. The milk is transformed into very fine spun paste cheeses (such as Caciocavallo podolico) as it gives the product organoleptic qualities that are particularly appreciated by the consumer.
The Vacca Podolica del Gargano is a Slow Food Presidium; a garrison that was created to protect and encourage the breeding of this breed, which in addition to producing excellent meat with few organoleptic characteristics, is bred in the wild and therefore offers tasty, healthy meats rich in mineral salts from its milk ricotta and cheeses with unique flavors are produced, such as caciocavallo podolico.
Difficult meats for the modern consumer, because they cannot be traced back to common aesthetic standards: fat is yellow (because animals graze herbs rich in carotene, a substance absent from feed and silage); the consistency is more fibrous; the taste is more intense and characterized. It is a meat that therefore requires adequate maturation, a procedure that the beef market from young or healed animals has in fact canceled. It will therefore be an expert butcher to adjust the aging times and to suggest the appropriate cuts for cooking.