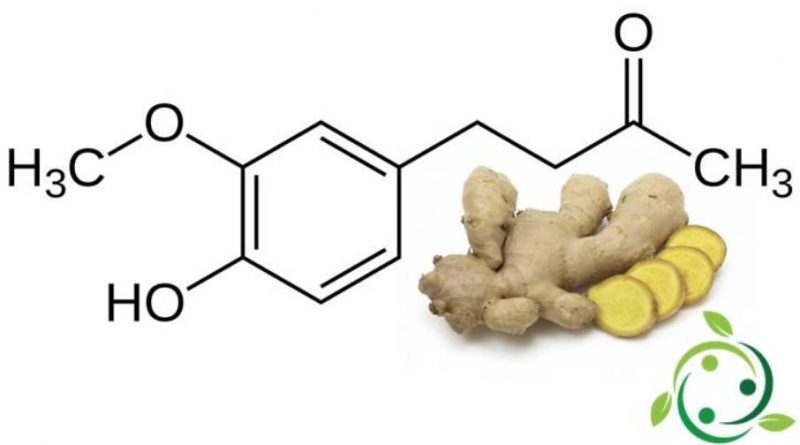 Zingerone, whose term in the official IUPAC nomenclature is: 4- (4-hydroxy-3-methoxyphenyl) -butan-2-one, and also called under the name vanillylacetone it is an aromatic compound with brute or molecular formula: C11H14O3.
Zingerone is recognized as having a particularly efficient scavenger role in free radicals.
It is in fact able to eliminate and degrade free radicals and reactive oxygen species in the human body and also inhibits the enzymes involved in the generation of these reactive oxygen species.
Zingerone is one of the main components responsible for the spiciness of ginger (Zingiber officinale Roscoe, 1807).
Fresh ginger does not contain zingerone but gingerol; the zingerone is formed, through the cooking process, through a retro-aldolic reaction, from the gingerol.
Physically, zingerone is a crystalline solid, moderately soluble in water and soluble in ether.
Zingerone is a molecule similar in chemical structure to other flavors such as vanillin and eugenol.

It is used as an aromatic additive in spice oils and in perfumery to give spicy aromas.
Zingerone was first isolated from ginger root in 1917 by Hiroshi Nomura, a professor of chemistry at Tokyo Imperial University. Nomura gave the name to the compound and identified the empirical formula of zingerone, in his studies at the laboratory of the Agricultural Academy.
Subsequently, Nomura identified and patented a method for the synthesis of zingerone, in which vanillin and acetone are reacted under basic conditions to form dehydrozingerone. This compound is obtained in an amount of about 95%.
This reaction is followed by the catalytic hydrogenation of the intermediate compound in order to form zingerone, obtained in the amount of about 100%.
As ginger compounds have been shown to be active against enterotoxin-induced diarrhea which is the leading cause of infant death in developing countries. Zingerone is probably the active component responsible for the antidiarrheal efficacy of ginger.