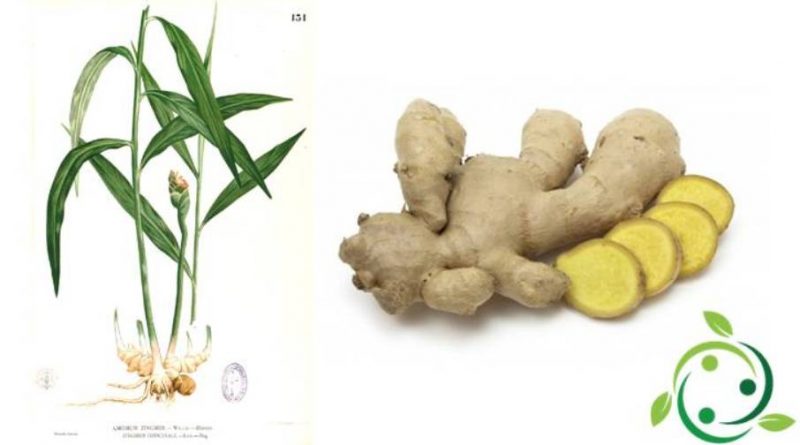 Ginger is a spice obtained from the rhizome of the homonymous plant (Zingiber officinale Roscoe, 1807) which is a herbaceous species native to tropical Asia.

Origins and History –
Ginger is a perennial herb plant, from whose rhizome a strongly aromatic and spicy spice is obtained, which is said to be very dear to Confucius (5th century BC) because it cleared the mind and eliminated impurities.
The name Zingiber derives from the Indian Zingibil, but the plant has many vulgar names depending on the country where it is grown; according to some etymologists, the origin of the name Zingiber derives from the Arabic Zind-schabil, which means root.
In ancient times it was the subject of numerous trades and could only be found dried, but today its cultivation has spread to many hot countries such as Brazil, Mexico, Africa, Indonesia, Peru, Thailand and wherever there are suitable conditions, that is, a warm climate tropical; however, the largest producer is India, which alone supplies more than 35% of world production and the speed of today’s transport means that it can also be found fresh in our markets, where it can be found naturally, with its cuticle external, and then it is called gray ginger, or the rhizome is decorticated and marketed as white ginger.
It is believed that the medicinal properties of Ginger were already known to ancient Eastern cultures, where the drug was used alone or as a component of herbal remedies; it has also been used for millennia in India and China as a food spice, especially in meat dishes, as a condiment or in sauces, for beer and other fermented drinks, or for syrups and biscuits, and to prepare a particularly appreciated Curry in India. In fact, Ginger has a strong antioxidant activity on fats and other foods, thus facilitating their conservation.
This plant was already considered a delicacy by the Greeks and Romans who had to pay heavy taxes to consume it.
During the Middle Ages, in Europe it was one of the most used spices in the kitchen and known by the name of “gengevo”.
The doctors of antiquity attached a lot of value to ginger: Dioscorides believed it capable of warming and calming the stomach; Pythagoras considered him an antidote to snake bites.
Galen, for its spicy flavor, classified it as “hot”, like all aphrodisiacs.
Precisely the invigorating aspect was central in the Arab peoples who took ginger pounded with honey to reinvigorate sexual performance.
According to the Salerno school, the rhizome pushed, indeed forced, young people to love, and this fame contributed to the birth of a potion made of cinnamon, ginger, cloves, breadcrumbs and rose water.
The cursed poet Francois Villon (XV century) among the lines of his “Testament” also listed a hundred ginger roots which he believed had “the property of making the genital organs of the two sexes join”.
In the sixteenth century, the aphrodisiac qualities of the plant were described by Pisanelli as excellent “to increase coitus: it is also so to give strength to a weak stomach”.
In traditional Asian medical doctrines, ginger was and is considered a “hot” element. According to the Chinese, it fights the ailments caused by cold and digestive problems, while for the Indians it is stimulating and pain-relieving.
Similarly, contemporary European herbal medicine attributes ginger the property of fighting nausea, vomiting and impotence.
Although in recent centuries this spice has lost its centrality in our cuisine, in the eastern one it has remained very important for flavoring sweet or savory dishes, sauces, Indian chutneys, spice and drink blends.

Description –
Ginger is a perennial herbaceous plant belonging to the Zinziberacee family that has the appearance of a cane with large tuberous rhizomes, very aromatic and with a camphor perfume, with hints of Lemon and Lemongrass. The drug is represented precisely by the rhizome.
This can be found naturally, with the external cuticle, and is called gray ginger, or the rhizome is decorticated and marketed as white ginger.
Ginger for its pungent aroma and the pleasant slightly spicy flavor is used in the kitchen as a flavoring and stimulant for digestion, but also in the liquor store as a corrective and for thirst-quenching drinks, and in the production of candied fruit and jams and also in the beer, especially in Anglo-Saxon countries.

Preparations –
Ginger is highly appreciated in the kitchen as a spice and by the food industry as a valuable flavoring (with ginger, for example, the drink known as ginger ale is produced), but it also has interesting medicinal properties.
On the market it is found in the form of fresh or dried root, reduced to powder or in the form of extract or as candied ginger using only the natural sugar of its root. The dried ginger root powder is typically encapsulated and sold in convenient tablets.
There is still no consensus on the dosage, but most doctors prescribe 500 mg to 1000 mg of ginger per day.
Ready-made packaged products can be used, such as the convenient Ginger vegetable capsules, by ingesting 1-2 tablets half an hour before traveling; or you can use dried Ginger in powder, dispersing a small teaspoon of it in a little warm water and drinking everything, always half an hour before traveling.
It is also possible to munch every few slices of Candied Ginger, before and during the trip. You can also prepare a decoction of root, boiling gently for 5 minutes, in a covered container, 2-3 slices of Ginger in about 50 ml of water and drinking the residual liquid, filtered, half an hour before leaving.
In the kitchen, ginger can be eaten both fresh, peeling its root like a potato, and dried powder. The latter is perhaps the most used version and also the easiest to keep. The fresh root, on the other hand, should be kept in the refrigerator once cut and possibly preserved in a glass jar so as not to alter its taste, appearance and properties. On the market there are also candied ginger, pickled ginger, a typical accompaniment to sushi, and herbal teas.
The taste of ginger in all its “forms” is actually quite spicy, so it is usually consumed together with other foods or in the form of a decoction. Even if there are many who dare to taste it in purity, cut into thin slices on its own or added to the salad.
In any case, fresh or grated ginger is perfect for seasoning all types of vegetables (raw and cooked). In fact, the spicy and slightly “lemon” flavor adds freshness to the usual side dish. But not only: the extract is also excellent for flavoring chicken and white meats in general such as fish and shellfish. Both in cooking and as a raw seasoning.
Those who love exotic flavors can try to enrich basmati rice or soy and rice noodles with a good amount of fresh ginger. A tasty, healthy idea that brings the flavors of summer to the table even in the middle of winter is then the mixed salad with ginger and avocado. To prepare it, you simply need to combine valerian or lettuce, finely chopped radishes, chopped avocado, strips of ginger and blood orange or pink grapefruit cut to the brim: a full of vitamins, minerals and antioxidants.
Obviously, ginger can also be freely added to tea and herbal teas. But what works most and best expresses the potential of the root is the decoction.
The ginger decoction is prepared by cutting the peeled fresh ginger into slices which must be immersed in cold water and then left to simmer. From the moment of boiling, let it cook for about 15 minutes. Then take the slices of root (you can eat them separately if you like) and filter the decoction. The latter should be drunk bitter throughout the day: you will get a strong detox draining effect.
The famous herbal tea ginger and lemon or ginger and lime is also very beneficial and pleasant in taste. In fact, the two ingredients go perfectly together. To prepare it we use fresh ginger (the procedure is the same as that of the decoction) and dried ginger. You have to boil the root for 15 minutes or dissolve the ginger powder directly in boiling water. Add lemon juice, untreated zest and honey to taste, out of the heat. This herbal tea performs a powerful action in case of cold, flu, fever, bad digestion and nausea.