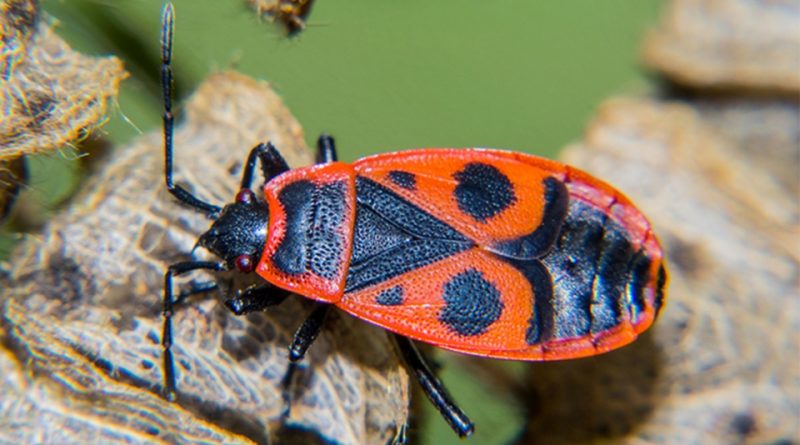 Geographical Distribution and Habitat –
The firebug is a phytophagous species widespread in Europe, Central America, North Africa and Asia, where it feeds on the sap of plants, especially lime and plane trees, but also hazelnuts, hornbeams, oaks, oleanders, hibiscus, without however causing particular damage .
Its habitat is that of temperate and Mediterranean areas, but not in the high mountains.

Morphology –
Pyrrhocoris apterus is an insect that at the adult stage is 8-12 mm long, oval and flat in shape and recognizable by its bright red color and black geometric shapes distributed over its body. Males and females exhibit a slight sexual dimorphism. The latter are conditioned by abiotic factors such as temperature.
The head and legs are black, the pronotum is red with a large black spot, the scutellum is black and the wings are red with three black spots each. These bright colors and these particular shapes serve to discourage its predators.
Both wings and elytra can experience total or partial development and the insect can fly only when total development is achieved.
In addition, the larvae, for their defense, give off an unpleasant smell thanks to three glands located on the dorsal side of the abdomen. It is a strategy that is used to communicate and to hunt.
The nymphs are ather and have a uniformly red livery, with a single black spot near the head. They have gregarious habits and it is not uncommon to observe large concentrations of specimens.

Aptitude and biological cycle –
The firebug, during the winter season, can survive by hiding in natural shelters, such as under dead leaves, in cracks of tree trunks or under stones. Their winter survival is possible thanks to the slowdown of their metabolism as in a sort of hibernation.
In early spring, the female copulates in tandem with several male partners, storing their sperm. This can lead to competition between the collected spermatozoa. For this reason, the male lengthens the copulation time with the female which can vary from 12 hours to 7 days.
In this way the male ensures that his sperm is predominantly present in the female’s spermatheca.
After mating, the female goes in search of a moist and protected place, where she lays from 12 to 60 eggs, black in color and about 1 mm long.
The nymphs that are born are morphologically similar to adults, but with an all red livery and with a single black spot near the head.
The larvae become adult at the beginning of winter after having gone through 5 different stages where there is the progressive sclerification and pigmentation of the integuments.
These in septa, in the spring period, have the habit of forming large aggregations, ranging from dozens to hundreds of individuals, at the foot of sunny tree trunks.

Ecological role –
Pyrrhocoris apterus is a bedbug, which mainly feeds on sap and plant seeds thanks to the rostrum. Among the favorite plants we have malvaceae and lime trees, but also hazelnuts, oaks, oleanders and hibiscus.
This bug can also feed on other animals (zoophagy) and carrion (necrophagia), being able to suck the hemolymph of the latter.
At the agrarian level this bug does not create particular problems as they do no harm.
The firebug was studied in 1891 by biologist Hermann Henking who discovered that during meiosis an element did not divide like all pairs of homologous chromosomes, but was transmitted directly to the daughter cell. The scholar called this element: X. In subsequent years, other scholars managed to determine that element X was nothing more than a chromosome. The males of the Pyrrhocoris apterus species produce two different types of spermatozoa: some contain the X chromosome and others do not. From the fusion of an egg and a sperm, an individual with an even (female) or odd (male) chromosome number can be born. This insect was fundamental for the discovery of the chromosomes that determine sex in all living species.