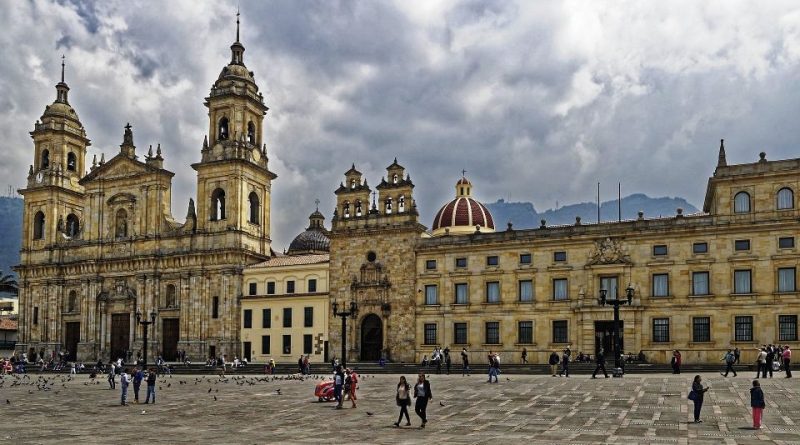 Colombia, whose official name is: Republic of Colombia, is a state located in the northwestern region of South America, with an area of ​​1,141,748 km² and whose capital is Bogota.
Colombia is bounded by Venezuela and Brazil to the east, Peru and Ecuador to the south and Panama to the north-west; it overlooks the Atlantic Ocean to the north (through its Caribbean Sea tributary) and the Pacific to the west. The islands of the archipelago of San Andrés, Providencia and Santa Catalina are part of Colombia. Colombia is the sixth largest country in America and the fourth largest by population.
The territory that includes today’s Colombia was originally inhabited by Amerindian tribes who migrated from Central America and the Caribbean. The main tribes were muisca, quimbaya, tairona and zenu, belonging to the families of the Arawakana, Chibcha and Caribe languages. Part of the south was inhabited by the Incas. In the fifteenth century the Spanish conquistadors occupied and colonized the territory by establishing the viceroyalty of New Granada. In 1819, with the campaigns of Simón Bolívar, Colombia gained independence from Spain together with the current Panama, Venezuela and Ecuador, united in a republic called Gran Colombia. However, already in 1830, Grande Colombia was divided following internal wars that led to the separation of current Venezuela and Ecuador.
The name Colombia derives from the name of Christopher Columbus and was formulated by the Venezuelan Francisco de Miranda to name the union of the American republics after independence, paying homage in this way to the discoverer of the New World.
It was on February 15, 1819, during the Congress of Angostura, that the state was adopted which adopted the name of the Republic of Colombia, known today as Grande Colombia, in order to avoid confusion with present-day Colombia, with the sovereignty over the territory of the Viceroyalty of New Granada, Quito and General Captaincy of Venezuela. The name was proposed by Simón Bolívar in the Jamaica Charter.
In 1830 it was established as a republic, under the name of the Republic of New Granada, and immediately afterwards it became a federal state, with the title of Granadine Confederation and with the adoption of the Constitution of 1858. It took the name of United States of Colombia in 1863, which in 1886 became the current name of the Republic of Colombia, an initiative that met the protests of the Congress of Ecuador and Venezuela, considering it a unilateral usurpation of the common historical heritage.
From a geological point of view, Colombia is part of the Pacific belt of fire, which makes the region prone to earthquakes, tsunamis and volcanic eruptions (Galeras volcano is present and active), being positioned near the convergence of the Nazca plate, the Caribbean plate and the South American plate. These plates form two large territorial areas in Colombia: one submerged in the Pacific Ocean and the Caribbean Sea, which covers an area of ​​approximately 828,660 km², and a second formed by the Andes mountains and the eastern plain which shares with part of Venezuela and covering an area of ​​approximately 1,143,748 km².
The islands of Gorgona, Gorgonilla and Malpelo are also part of Colombia, located off the Pacific coast and all of volcanic origin. In the Caribbean Sea are located, instead, the islets and banks of Roncador, Serrana, Quitasueno, Bajo Nuevo and Serranilla.
From a geographical point of view, the Colombian territory is divided into a mountainous region in the west and a flat region in the east. In the same way it is crossed by the Andes mountain range, branched into three distinct mountain ranges named according to their relative geographical position: Cordillera Occidental, Cordillera Central and Cordillera Oriental. The surface of the Colombian territory has reliefs in the so-called Nudo de los Pastos and in the Colombian Massif in the Andean region of Colombia, from where the three mountain ranges descend, to the north. To the west, starting from the Pacific coast, there is a coastal plain, interrupted only by the Serranía del Baudó, one of the lowest and narrowest mountain ranges in Colombia, close to the border with Panama and bounded by the course of the Atrato river, which is part of of the area called Chocó biogeográfico and which has one of the rainiest climates in the world.
The Cordillera Central has numerous peaks and volcanoes, including the Puracé, the Nevado del Huila, which with its 5,700 meters above sea level and the highest peak in the Andes in Colombia), the Nevado del Ruiz (5,321 m), Nevado del Tolima (5,200 m), Nevado de Santa Isabel (5150 m), Nevado del Cisne, Nevado del Quindío and Serranía San Lucas; between these mountains lies the Valle d’Aburrá.
The highest point in Colombia is the Pico Cristóbal Colón, in the Sierra Nevada de Santa Marta, with a height of 5,775 m. s. L. m. The Sierra Nevada is divided by the Andean chain from the Sierra de Macuira which is located on the Guajira peninsula.
Colombia’s highest mountains are noteworthy for two curiosities: the Christopher Columbus Peak and the Simón Bolívar Peak are both at 5,575 m asl. and both are the highest peaks on Earth whose slopes face directly onto the sea (coastal).
From the hydrographic point of view, Colombia is one of the countries with the greatest water resources, and on its territory there are five large watersheds that empty their waters respectively in the Caribbean Sea, in the Orinoco, in the Amazon River, in the ocean Pacific and the Catatumbo River, the latter formed by the rivers that descend towards Lake Maracaibo. The main rivers of Colombia are Caquetá, Magdalena, Cauca and Atrato.
The climate of Colombia, also due to the altitude and latitudinal differences, varies from the extreme cold conditions, present in the Andean glaciers, to the warmer climates present at sea level, with two dry seasons and two of rain influenced by the trade winds and the intertropical convergence zone, in turn influenced by the effects of El Niño and La Niña. 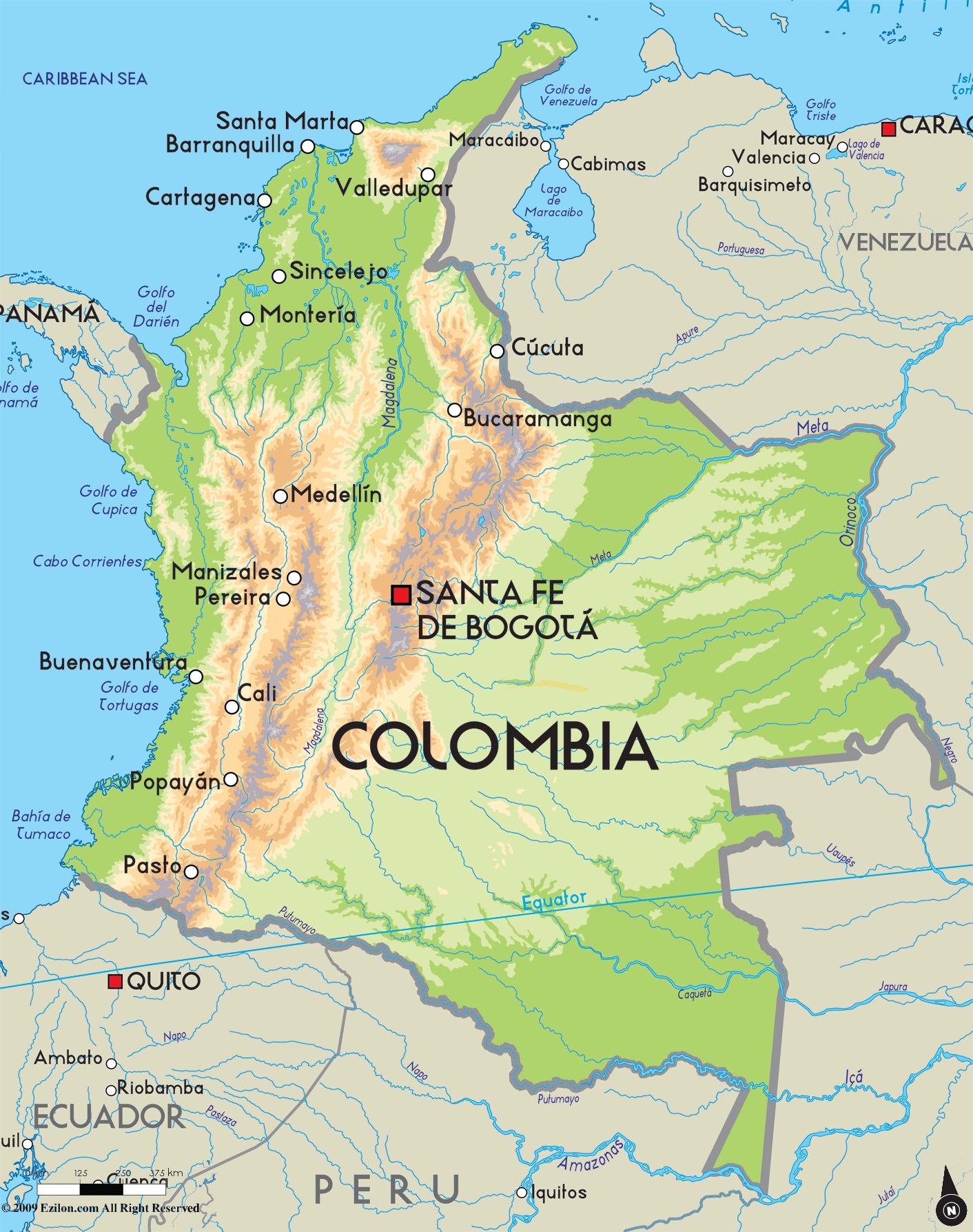 From an environmental point of view, Colombia is a nation with serious problems of pollution and environmental degradation.
9% of the territory is protected. Environmental treaties to which Colombia has adhered: Ramsar (wetland protection), CITES, Basel (toxic waste), Montréal protocol (CFC emission), CBD (biodiversity).
According to a WWF report, almost half of Colombian ecosystems are in critical or endangered conditions. Furthermore, of the 1,853 plant species assessed, 665 (36%) are at risk of extinction, while of the 284 terrestrial animal species assessed, 41 are in serious danger, 112 are at risk and 131 are vulnerable. According to the WWF, environmental degradation in Colombia is due to the extraction of oil and minerals and many responsible companies are foreign.

Flora –
Colombia’s flowers include orchids, “national flowers”. They grow in practically all regions and climatic zones of the territory, from the sand dunes overlooking the sea, to the windy mountain regions above the tree line but the area that offers the greatest variety of orchids is Antioquia. As for plants, one of the most incredible in the Amazon is the Amazonian Victoria, a species of water lily with round leaves that is strong enough to support even a child. There is also frailejones, a plant with large leaves, of a color ranging from silver to gold, arranged in the shape of a rosette. The flora of Colombia is extremely rich, there are 34 national parks, 8 smaller areas called Santuarios de fauna y flora, 2 reserves and 1 natural area; all protected by a national body called Inderena (National Institute of Renewable Natural Resources and the Environment), a branch of the Ministry of Agriculture. The Ministry of the Environment, created in 1994, took over the management of national parks through the department of the Special Administrative Unit of the National Park System, which works in collaboration with local organizations. The first nature reserve was that of the Cueva de los Guàcharos, from 1960.

Fauna –
Colombia occupies the world record for its variety of birds, ranging from the huge Andean condor to the tiny hummingbird. There is a large variety of macaques, parrots and toucans. There are also reports of a multitude of aquatic species such as ibis, herons, pelicans and flamingos but also, among the fish, the famous piranha and electric eel. Moreover, it has an enormous variety of amphibians, reptiles, bats, rodents and insects, among which the butterflies and beetles stand out. Finally, the territory hosts the typical rainforest fauna: jaguars, armadillos, ocelots, peccaries, deer, monkeys, snakes, bears. Typical the anteater and the bear with glasses.