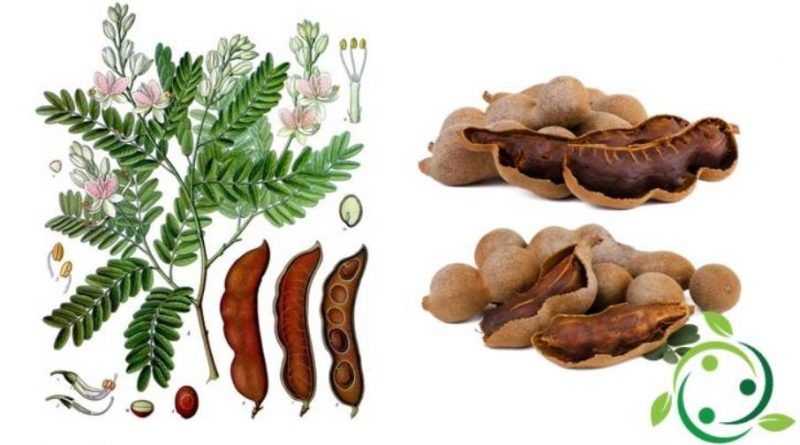 Tamarind is a spice obtained from the homonymous plant (Tamarindus indica L., 1753) which is an original tropical fruit tree from an area between East Africa and India.

Origins and History –
The tamarind, also called “date of India”, is a tropical tree of the Fabaceae family which, as well as in East Africa, is also present in the Asian tropical areas and in Latin America.
It is a tree with slow growth so that an ancient oriental proverb says: “whoever plants tamarinds does not collect tamarinds”.
Tamarind is a plant used for both food and ornamental purposes and also for its medicinal properties.
The tamarind arrived in Europe brought by the crusaders.
In Hindu mythology the tamarind is associated with the Krishna wedding which is celebrated with a festival in November. At the time of Queen Victoria, the British who lived in Goa in India held a tamarind pod in their ears when they went to the native neighborhoods to keep them away. In fact they thought that the pods were inhabited by demons. Since then the colonists were called “tamarind heads”.
In Italy Tamarindo Erba has been a product of great diffusion and success since its debut in 1898: it was a syrup that stretched with ice water, very refreshing. It is still on the market today in its original packaging: an elegant square bottle, with a label that tells the story and virtues of the product in “old-fashioned” characters.
The main producing countries are Southeast Asia and the West Indies.
The main user countries are Asia and the Latin American countries.

Description –
Tamarind is an evergreen, massive tree characterized by slow growth. It is a long-lived, centuries-old tree which, in favorable conditions, can even reach thirty meters in height and more than seven meters in circumference.
The fruits are woody pods, about ten centimeters long, which contain 4 to 12 seeds inside; these are protected by a dark brown edible pulp that has an acidic aftertaste.
The green and hard pulp of a young fruit is considered by many to be too acidic, but is often used as a component of savory dishes, transformed into pickles or used to make some poisonous yams in Ghana edible.
As the fruit matures it becomes sweeter, less acidic and more palatable. The acidity varies between cultivars and some sweet tamarind cultivars have no acidity when ripe.

Active principles –
Tamarind is a spice that is extremely rich in vitamins and minerals; it contains tartaric acid, which is a powerful antioxidant, and is useful for combating digestion problems.
Its active ingredient is tamarindin, which has an anti-infectious and antibacterial action, perfect for counteracting some viruses and bacteria.
Tamarind has great nutritional value: the pulp is made up of 31% water, 57% sugar, 5% from dietary fiber, ash, protein and fat. The main constituents are pectins and simple sugars.
Among the various minerals present in tamarind we remember, for their high quantities: potassium, phosphorus, magnesium, sodium, calcium and selenium, while it is a source of vitamins A, B1, B2, B3, B5, B6, vitamin C, K, and J.
The tamarind, as mentioned, is rich in tartaric acid which is present in a percentage of 12%. Tartaric acid, for its functions, helps the body protect itself from harmful free radicals.
Its sticky pulp is a rich source of food polysaccharides, hemucellulose, mucilage, pectins and tannins. The fruit contains many volatile oils such as limonene, geraniol, safrole, cinnamic acid, methyl salicylate and pyrazine. Together these compounds give tamarind its medicinal properties.

Properties and Uses –
Tamarind is a plant whose pod-shaped fruits are used which contain a dark brown paste inside.
It can be found on the market in the form of fresh pods or as tamarind paste or dried pods.
Tamarind paste is a dark brown viscous paste sometimes sold under vacuum, with a smell of light fruity aroma and sour, sour, very fruity, refreshing taste.
We are known above all for the syrup, but both in Asian and Latin American cuisine, tamarind (or rather its pulp) is used as a spice.
The intensity scale: 1.
It has purgative and refreshing properties; its pulp, together with the leaves and bark, are also used for its strong therapeutic properties against malarial fevers. The aqueous extract obtained from this fruit has hypoglycaemic properties.
Tamarindin, the active substance in tamarind, is effective against Aspergillus niger, Candida albicans, Staphylococcus aureus, Bacillus subtilis, Escherichia coli and Pseudomonas aeruginosa.
The other parts of the plant such as pulp, leaves and bark also have medical applications. In India it is used in Ayurvedic medicine for digestive problems and against toothache. In Sudan the leaves are used in the form of herbal teas to combat malaria fevers. In Italy Pietro Andrea Mattioli (1500), doctor of the Salerno Medical School, called it useful “to make the body move”. In fact, at low doses it regulates intestinal function, while at higher doses it has a laxative effect. Tamarind is also considered an excellent refreshing and is useful in summer to replenish the loss of mineral salts due to sweating.
For those suffering from digestive problems and gastric disorders, the consumption of this spice is recommended, which also goes to regulate the intestine thanks to the presence of organic acids that we find inside the pulp. Unfortunately, however, there are some disadvantages: tamarind in fact interferes with the activities envisaged by some drugs such as aspirin, since it increases bioavailability.
In the culinary field, tamarind is part of the basic ingredients of Indian curry; in Asia and the Middle East it is used to flavor stews and vegetables. Its pulp is left to soak in hot water for several hours before squeezing it and then using its water which must be filtered. The leaves have healing properties and are used for the preparation of herbal teas which are considered in all respects healthy.
In summary, the benefits of tamarind are:
– Prevents cancer: tamarind is also used because of its antioxidant properties, which help protect the body from harmful free radicals, which can increase the risk of cancer.
– Helps keep blood pressure under control: the potassium present in this fruit helps to control blood pressure and heart rate.
– Cholesterol: the tamarind pulp would also be effective in reducing the level of cholesterol and protecting the body from heart disease.
– Improve eye health: this fruit is rich in vitamin A, essential for healthy eyesight. Tamarind also contains a substance that protects and hydrates the cornea.
– Protects from infections: tamarind is useful for protecting us from infections, and helps strengthen our immune defenses.
– Improves the health of the skin: even the skin can derive many benefits from this fruit. Rich in antioxidants, tamarind helps fight free radicals, one of the main causes of aging. In addition, it is used for the treatment of small burns.
– Antibacterial: this fruit would also have remarkable antibacterial properties; Furthermore, in India it is also used for the treatment of toothache.
Other uses for this plant include:
– Thanks to its density and durability, the heart of the tamarind wood can be used to make furniture, parquet and ceilings.
– The leaves are used in India and Africa to feed silkworms of the genera Anaphe or Hypsoides, which produce a silk considered to be of superior quality.
– Leaves and flowers are also used as mordants for fabrics and straw hats.
– The aqueous extract of the leaves is used to combat the Schistosoma parasite.
– Tamarind trees are also widely used in India – particularly in Andhra Pradesh – to provide shade on the roads.
– The fruits of the tamarind are also very popular with monkeys.
– It is used as an ingredient in the Poko Loko cocktail.

Preparations –
The fruits of Tamarind can be eaten fresh or dried but are nowhere to be found in Italy, where this species is known above all in the form of syrup or pulp.
The dried pods must be left to soak for 10 minutes in boiling water, which must then be filtered to be used (tamarind water). Since the strength depends on supplier to supplier you have to add little by little until the result is achieved.
On the market it is usually found in the form of a fibrous pulp, very dark and pressed: it is the so-called tamarind paste that derives from the peel deprived of the seeds. To be used the pulp must be purified in boiling water for half an hour. The liquid of this purification can be drunk, but with extreme caution because it is slightly laxative.
The Tamarind pulp is used as a spice for the preparation of sauces and soups.
Its flavor changes between sweet and sour and lends itself well to prepare accompanying sauces to enhance the flavor of first and second courses.
We find it in Worcester sauces, in Sambhar (Indian lentil soup), accompanied with rice. It is also used for meat or fish curries because of its taste which is stronger than both lemon and lime. In specialized shops you can also find it candied.
Tamarind is also widely used in Mexican cuisine, in Thai and Indonesian cuisine because it gives that much appreciated sweet and sour flavor and is used as an acidifying agent.
In Mexico and the Caribbean, the pulp is diluted with water and sugar to make a drink called “fresh agua”.
Its sour and fruity flavor goes very well with the spicy peppers. In India it is used with meat and legumes, as for example in vindaloo, one of the most famous Indian dishes, (pork marinated many hours with a paste made from onions, garlic, ginger, chillies and other spices and tamarind water, stewed very long). Also in India, tamarind is also used in bese bele, a vegetarian rice-based dish. In Tamil a soup (rasam) is used, prepared with fresh and dried spices and abundant tamarind. In Java, tamarind is used as the basis for a spicy and sometimes sweet pasta to marinate the soy bean meat or cheese before frying it. In Southeast Asia, it is eaten as a dried and salted, dried and candied snack. In the West, tamarind is little known except as an ingredient, as mentioned, in the Worcester sauce. In Italy, especially once, it was used as a drink.