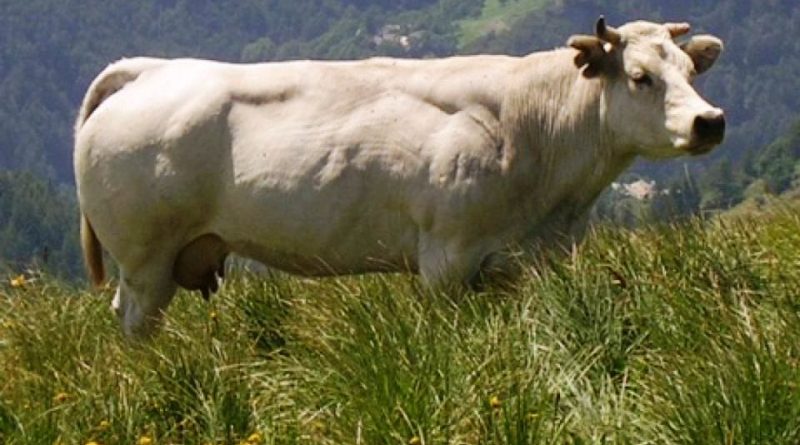 Piemontese is a native bovine breed (Bos taurus Linnaeus, 1758) of Piedmont, originally with a triple attitude but today bred for the production of meat.

Geographical and Area Distribution –
The Piemontese is an autochthonous breed of Piedmont which today is mostly bred in the provinces of Asti, Cuneo and Turin.
In addition to Piedmont, Piedmontese is also bred in other Italian regions and abroad.
In Italy in 2017 it was the third most bred bovine breed, after the Friesian and the Alpine Brown. Being the latter dairy breeds, the Piedmontese is therefore the most bred breed among beef cattle.
Furthermore, in the eighties of the twentieth century, in Canada, starting from cattle from Piedmont, a local bovine breed known today as North American Piedmontese was obtained, whose genetic improvement is managed by the Canadian Piedmontese Association / Société Canadienne Piedmontese, and which it was later spread also to the United States of America.
However the Piemontese breed is now mainly used as a specialized breed of meat with high slaughtering yield and high percentages of first class cuts.

Origins and History –
There are many theories on the origin of the Piedmontese breed but all agree that it is a race of ancient origin.
Based on morphological similarities and archaeological evidence, Professor Silvano Maletto (University of Turin) hypothesized one of the progenitors of the Piemontese breed in a Pleistocene cattle of the Aurochs type.
Subsequently, in the period between the Middle and Upper Paleolithic (25,000-30,000 years ago), a great migration of Zebu originating in the Indian subcontinent led to the crossing of the two populations.
The origins of the Piedmontese breedings date back to a period from the late 1800s to today.
It was in 1800 that the distinction into two categories was consolidated, namely:
– Ordinary hilly, mainly intended for use in work activities and for the production of milk for the breeding of calves; it was bred in the Langhe, in the hilly areas of Chieri, Moncalieri, Santena and in the Canavese area.
– Choice of plain, with characteristics similar to the previous one. Due to the quality of the meat, its breeding was aimed at milk production and slaughter; it is widespread especially in the plains to the right of the river Po.
A third category can be distinguished: the double thigh, also called horse rump, more frequently Fassone: it is equipped with thigh and buttock muscles with a markedly convex hypertrophic profile, which is taken into particular consideration in the breed’s genetic improvement programs.
Breed with triple aptitude in origin, over time that for work has been gradually replaced by agricultural mechanization while that of milk with the introduction into breeds of breeds specialized for this attitude, even if the Piemontese, compared to other meat breeds, has more milk production and often, once the needs of the calf are covered, the farmer remains a surplus that is generally used for the production of typical cheeses of the region such as toma, Castelmagno or Raschera.
The history and characteristics of the fassone are represented inside the House-Museum “Casa della Piemontese” which is located in Carrù near Anaborapi, the National Association of Piedmontese Cattle Breeders.
The National Association of Breeders of the Piedmontese Breed (A.Na.Bo.Ra.Pi.) was established in 1960 with the task of carrying out genetic improvement and development of the breed. This activity takes the form of defining the selection objectives, in the management of the Herd Book, of the Genetic Center for the Performance Test, of the Progeny Tests and of the Bull Center where the seed of the bulls qualified for Artificial Insemination is produced.

Morphology –
The Piemontese is a bovine breed that is recognized for having a coat that is gray or pale fromentino in the bulls, with a marked accentuation of the black hairs on the head (especially around the orbits), on the neck, on the shoulders and on the distal regions of the limbs; sometimes even in the lateral faces of the trunk and on the hind limbs with the formation of dark spots or patches; in cows the coat is instead white or light fromentino with shades up to gray or Fomentino.
Calves at birth have the fromentino coat loaded.
It also has black pigmentation on the muzzle, lips, oral mucous membranes (tongue, palate and cheeks), eyelashes, margins of the eyelids and ear, foreskin bow, lower part of the scrotum, tassel of the tail, anal opening and lips of the vulva, claws and unghielli.
The horns are present, which are black until around 20 months of age, and which occur in yellowish adults at the base, lighter in the middle third and black at the apex. The partial depigmentation of the aforementioned parts does not constitute grounds for disqualification.
This breed also has a soft, elastic and thin skin.
The shoulders are compact, broad, muscular, well adherent to the trunk and in the right direction.
The neck is broad, muscular and with somewhat pronounced hump in the bull, relatively long and less muscular in the females, light and medium-growth dewlap.
The head is expressive, shorter and wider in the bull, longer and finer in the cow, sincipite covered by a small tuft, often of a pale fromentino color, flat and slightly depressed forehead between the prominent orbital arches; medium-developed ear, large eyes with lively expression (the color of the iris is black); wide, straight nose, with wide nostrils, broad muzzle, wide mouth with well-pronounced lips.
In addition, the withers are broad and muscular, joined continuously to the neck, the back is wide and horizontal, the loins are muscular and full, the chest is large and muscular, the chest is deep, the side is well arched, long, deep, the belly is wide and deep, the hips are full and rather long, the tail is long, with abundant bow, the rump appears: in the bull large and with good muscle development, while in the cow it is wide, long and muscular; the thigh appears in the bulls broad and well muscled, in the cows full and well developed; the buttocks are wide and of accentuated muscular development and long, in the bulls, while they are wide and well descended in the cows.
The forelegs are solid, rather short arm, long and muscular forearm, thick and wide knee, medium-length and solid shin, strong knot, short tread, strong and tight claws.
The hind limbs are well direct, free from tares, muscular leg, wide and solid hock, not straight and not mowed, robust knot, short tread, strong and tight claws.
Characteristics of the appiombi that give these cattle a regular pace.
The breast is of regular conformation, with regular quarters and well arranged nipples, well vascularized.
The testicles are harmoniously developed and descended into the scrotum.
A salient feature of this breed is muscle hypertrophy or double croup, due to a mutation in the gene that codes for myostatin, a protein that limits muscle growth. It is manifested by a greater muscle growth (shoulder, rump and thigh), due to the increase in the number of fibers and not their diameter. The identification of this genetic mutation is documented in Piedmont towards the end of the 19th century. The animals that carried them were identified in various ways: in Piedmontese with the terms fasson (hence the term fassone) or cheussa (of the thigh), in Italian with double rump or with congenital muscle hyperplasia. These specimens were initially considered pathological, and therefore viewed with distrust, but later on the breeders learned to appreciate their positive zootechnical characteristics and the consumers organoleptic ones. Since the ’70s all the bulls used for the reproduction of the Piedmontese breed have been homozygous for this character, a practice that has almost led to the fixing of the character in the breed.
In the presence of some defects such as: macroglossia, arthrogryposis, atypical coat depigmentation, brachignatism, prognathism, cryptorchidism and monorchidism, of which only the first three are the subject of relief at birth, exclusion from the Herd Book.

Productive attitude –
The Piemontese, which was originally a triple-aptitude breed, is used today mainly for meat, in particular for the presence of its thigh muscle hypertrophy (Fassone or double thigh) which, as mentioned, still represents a characteristic element of the Piedmontese territory .
This breed has good daily increases in live weight, and good adaptation to various environments even in modest feeding conditions as well as good milk production capacity for calf breeding.
The main production is the veal:
– slaughtered on average at 15-18 months of age;
– PV slaughter of 500-600 kg;
– excellent yields for slaughter.
The meat of this breed of cattle is tender and lean and certainly renowned. It is traditionally used in Langhe dishes such as Albese raw meat, veal with tuna sauce, mixed boiled meat or braised beef in Barolo (or in the Barbera variant).
Currently the Piedmontese bovine breed is recognized as P.A.T .; the production area extends to the whole Piedmont Region.