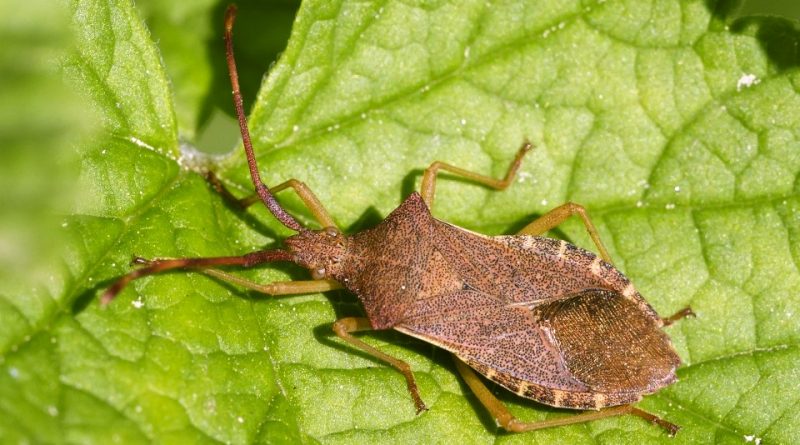 Geographical Distribution and Habitat –
The pit bug is an insect found in a vast region that includes the Mediterranean, Central Asia and parts of north-western Europe.
Its habitat is that of dry and warm environments, exposed to the south, bushes and edges of the forest with shrubs bearing berries and small trees of various families, in particular Buxaceae and Rhamnaceae, as well as Rosa canina and Crataegus (Rosaceae) or Lonicera xylosteum ( Caprifoliaceae).
For economic reasons, it is a harmful insect especially for the hazel, where it is responsible for the bugbug of hazelnuts and traumatic abortion. Similar conditions can be caused on the pistachio. Host plants are also oak, chestnut and others.
It can also be the carrier of the fungus Nematospora coryli, the causative agent of stigmatomicosis of the core.

Morphology –
The Gonocerus acuteangulatus is a medium-sized insect, which when mature is between 11 and 14 mm long.
The insect is characterized by the presence of reddish-brown spots on the back, with purple hues along the edges of the chest and with a slightly expanded abdomen and the distal part of the rust-colored wings.
Nymphs are recognized by having a green abdomen.
The insect has a pungent-sucking mouthparts and inflicts nourishment punctures on the fruits of the core with mouth-watering stilettos, reaching the seed through the still unlignified shell.

Aptitude and biological cycle –
The pit bug is an insect that winters as an adult at the base of the bushes and reaches plants in May.
In late spring, starting from late May and early June, the spawning begins on the upper page of the leaves, and after about a couple of weeks the nymphs emerge and immediately attack the shoots and bracts and then the hazelnuts.
The females live until the end of summer and during their life they lay a few dozen eggs, mainly in isolation, on the bracts and on the leaves of the core. Juvenile forms (neanids) can be found on vegetation from mid-June to the end of August.
The insect makes only one generation per year.
Gonocerus acuteangulatus is the potentially most dangerous core bug because it can only carry out its life cycle on the core while the others carry out part of their cycle also on other plant species.
The damage it causes on the core is purely qualitative. With the puncture of sucking the insect injects saliva into the seed causing two types of reaction depending on the period. If it comes to early stings, the seed undergoes a traumatic abortion and at the harvest there will be hazelnuts with the shell normally formed but with the seed totally atrophied. In the case of later stings, the seed completes its development but presents alterations in color and organoleptic characteristics, it is wrinkled, with necrotic brownish spots and with a strongly unpleasant smell and taste due to the phenomena of rancidity. The affected part of the seed is sometimes surrounded by darker halo, and is often affected by depression of the external peripheral tissues. The presence of bedbug adversely affects the quality of the product with consequent commercial depreciation at the time of shelling.
To these damages can be added other indirect due to the transmission of a parasitic fungus.

Ecological role –
The control of Gonocerus acuteangulatus, as for other insects, must be set up with a careful program of agro-ecological practices and monitoring of infestations.
In general, an integrated defense system must be implemented which includes:
– Adoption of good agronomic practices such as the presence of uncultivated areas near the hazel grove.
– Monitoring the trend of insect populations in the field by sampling performed with the method of shaking the plants in the period May-June.
– Execution of insecticide treatments only in exceptional cases and in any case only upon exceeding the intervention threshold set by the regional integrated defense regulations (5-6 individuals per plant).
In the case of the use of agro-drugs, those with less impact on humans and the agro-ecosystem must be used, to avoid damaging the biocoenosis of useful insects and other non-target organisms. The use of some simple agronomic practices also allows to avoid the onset of other phenomena that are often confused with the bug (“hidden defect” or “internal rotten”) and which instead are linked to a bad conservation of hazelnuts.
Furthermore, among the agronomic techniques, the hazelnut must remain on the ground for a few days after its maturation. After detachment from the tree, the hazelnut has a reduced moisture content, equal to 5-6% of the total weight which, however, can be reabsorbed while on the ground, subtracting moisture from the soil or from the air which allows the start of the fermentative processes that lead to the browning of the seed (“hidden vice” or “internal rotten”). The generalized browning of the seed leads to a bad smell and an unpleasant taste.
It is also advisable to carry out the double collection: the first when about 70% of the product has already fallen to the ground, the second at the end of the physiological drop. The double harvest, unlike the single harvest in which the product is picked up with a single passage, allows to limit the damage to the seed.
Important is also the drying of the hazelnuts which represents the first important phase of preparation of the product for storage and avoids the acidification of the oil. With this process it is necessary to guarantee the maintenance of low humidity in the seed, below 5%.
Finally, a mention of the Storage phase: hazelnuts can in fact withstand long storage times, however their quality decreases progressively. Furthermore, the availability of hazelnuts on the market is subject to alternation, for various reasons, seasonal and climatic. This fact determines periods in which the product is scarce or in which it is very abundant with obvious consequences on prices. To guarantee quality and reduce price fluctuations, it is essential to monitor and extend the commercial life of the seeds in order to introduce them on the market with more regular flows.