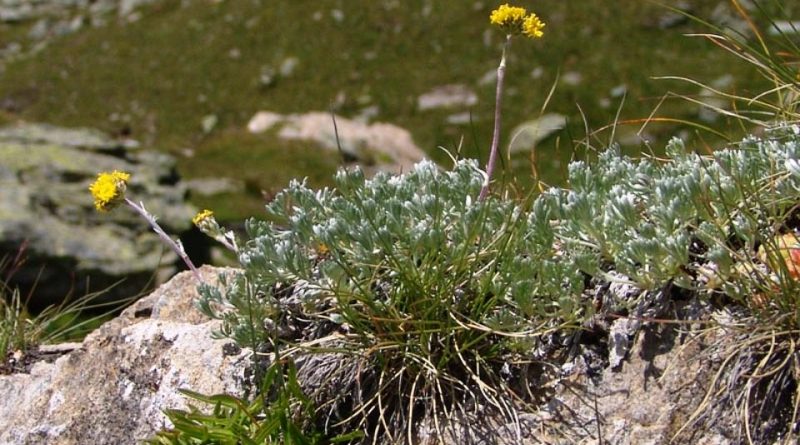 The Glacial Wormwood (Artemisia glacialis L.) is a herbaceous species belonging to the Asteraceae family.

Systematic –
From a systematic point of view it belongs to the Eukaryota Domain, Plantae Kingdom, Phylum Magnoliophyta, Magnoliopsida Class, Asterales Order, Asteraceae Family, Asteroideae Subfamily, Anthemideae Tribe, Artemisiinae Sub-tribe and therefore to the Genus Artemisia and to the Species A. glacialis.

Etymology –
The term Artemisia comes from Ἄρτεμις Artemis Artemide, Greek name of the goddess Diana, a genus already mentioned in Pliny; according to some authors, Artemisia II of Caria (Αρτεμισία Artemisía? -350 BC), sister and wife of Mausolus, would have given this plant its name.
The specific epithet glacialis comes from glaciés ice: ice, glacial, which grows near glaciers.

Geographical Distribution and Habitat –
The Glacial Wormwood is a subendemic entity of the western Alps but with limited trespassing in nearby territories. It is present in Italy in the Aosta Valley and Piedmont and previously reported by mistake in Liguria and Veneto.
Its habitat is that of rocky environments and morainic debris, more rarely found in rocky or stony alpine pastures, from 2100 to 3300. In Valle d’Aosta it is present at high altitude on calcareous substrates from ca 1800 to 3300 m, in the past it was exceptionally found in Val di Cogne at 1400 m. 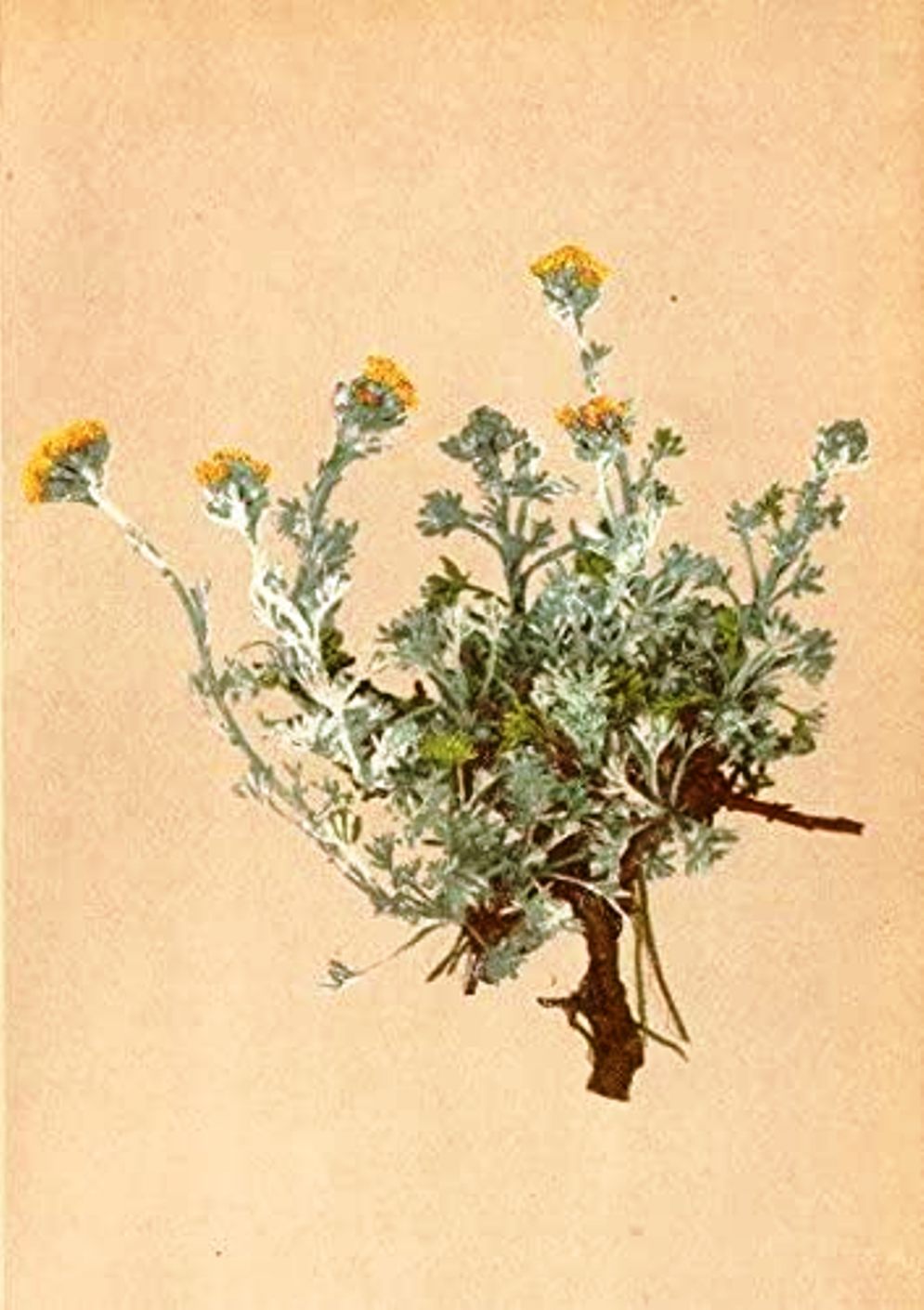 Description –
Artemisia glacialis is a small (5-15 cm) suffruticose plant with an aromatic odor and woody stems at the base, covered with a dense whitish hair.
The basal leaves form a dense silvery-grayish pad made up of typed lacinias, deeply incised, covered with shuttle hairs.
The leaves of the inferior caule and sterile jets are very similar and long petiolate; the upper leaves of the caule, little leafy, are alternate, gradually decreasing and briefly petiolate, up to the upper ones, which are bractiform.
The flowers are yellow, gathered in flower heads gathered in dense globular or ovoid glomeruli (3-10), located at the apex of the flowering scapes. Each flower head is 4-6 mm wide, made up of 30-40 flowers, all tubular, with a glabrous corolla of a golden yellow, surrounded by a silky-grayish, woolly envelope, with oblong scales edged with an evident brown margin.
The antesis is between July and August.
The fruits are hairless achenes.

Cultivation –
Artemisia glacialis, as mentioned, is a spontaneous endemic species of the Alpine regions where it grows in certain habitats and can, in any case, be reproduced in the same way as other artemisias in similar climatic areas, also because, due to the rarity of the species, the collection it is regulated according to regional laws.

Uses and Traditions –
Artemisia glacialis, also known by the names of Absinthe black genepì, Artemisa of the glaciers, Artemisia glaciale, Absinthe of the glaciers is a plant with pharmaceutical properties.
For the less experienced it can be confused with:
– Artemisia umbelliformis Lam. – Artemisia genepì white with a pleasant aromatic odor, which is distinguished by the palmatosette leaves with 3 -5 bifid or trifid divisions with linear segments, up to 1 mm wide and for the spiciform raceme inflorescence with small yellow-golden flower heads, those lower with elongated peduncles, the upper subsessile, without black scales inserted in the envelope.
– Artemisia genipi Weber – Absinthe genepi in spike that differs for the leaves of a silvery green color, the basal ones with petiole pennatopartite or 3-5 simple divisions, those of the caule pennatopartite, the upper ones often undivided. The spike inflorescence, often reclined, formed by small yellow ovoid flower heads 2,5-4 mm wide, sessile, with tomentose involucral bracts with a membranous border edged in black, which are inserted along the scape, very dense in the apical part.
Artemisia glacialis, compared to other Genepì species, has decidedly lower aromatic and therapeutic properties and is considered the poor relative of Genepì.
For medicinal purposes, the flowering plant harvested at the beginning of flowering is used and dried in a shady and ventilated place. The root can also be used by collecting it in the summer. Tonic, antispasmodic properties.
It is also used in the kitchen where the properties of genepì and similar varieties focus on the bitter principles contained in them which make them excellent for making aperitifs and digestives. In addition, it can be used to combat ailments of the respiratory system.
The mountaineers use the many species of genepì by macerating them in grappa obtaining a stomachino liqueur that seems to have the ability to heal altitude sickness.

Method of Preparation –
With Artemisia glacialis, a liqueur can be prepared by letting the plant macerate in alcohol for 45 days and then adding water and sugar, the liquid will then be filtered and left to rest for at least a month before use.
The necessary ingredients are: Artemisia glacialis seedlings (flower and stem), one liter of alcohol, one liter of water and 400 g of sugar.
Twenty seedlings of Artemisia Glacialis must be macerated in one liter of liqueur alcohol for forty-five days. Add a liter of boiled water with four hectograms sugar.
Leave to settle overnight, then filter. To obtain a good liqueur, it is recommended to let it rest for at least a month before consuming it.