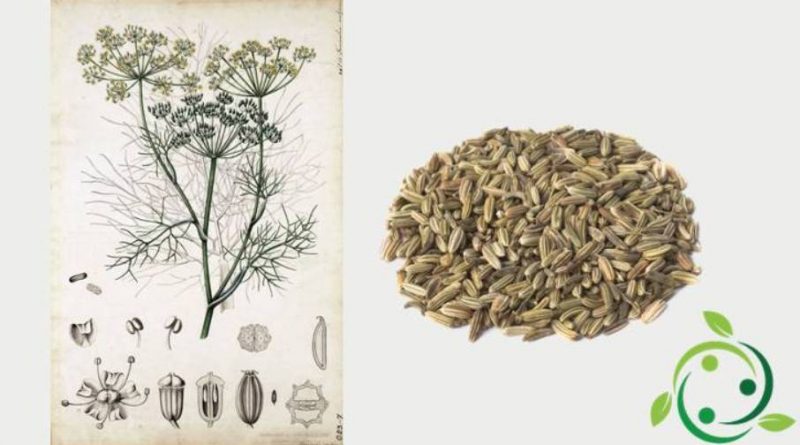 The seeds of wild fennel (Foeniculum vulgare L., 1753) are the diakenes, therefore the fruits, of this plant and used as spices.

Origins and History –
Fennel is a Mediterranean herbaceous plant of the Apiaceae family known since ancient times for its aromatic properties. It seems that its horticultural cultivation dates back to the 16th century.
From this plant the term infinocchiare is derived, in the sense of “cheating”, “cheating” which derives from the practice of using fennel as an appetizer to deceive the customer’s taste towards a poor quality wine or to use its seeds to alter the taste of bottled wine.
Plant similar to anise, so much so that in many Asian countries fennel and anise have the same name, creating a little confusion. In Greece it is called marathonas, referring to the plain where the race took place and where, in fact, the fennel grows wild. The capital of Madeira took the name Funchal from fennel (funcho in Portuguese) which is very abundant on the island.
The history of fennel is however very ancient. He was known by the Greeks; Demosthenes, in the third century BC he says that fennel crowns were needed for the rite in Dionysius. It was appreciated by the Romans, who spread it throughout Continental Europe.
Pliny the Elder (1st century AD) says that snakes rubbed themselves against the fennel plant, after changing their skin, to regain their sight, and in relation to this story, it says that fennel is excellent in eye care. According to ancient popular beliefs, fennel had the virtue of being a strong antidote against the biting of poisonous reptiles and dogs.
In the Middle Ages, fennel was thought to keep spirits away from homes and bunches were hung above the entrance doors. For the same reason, seeds were put in the holes for the keys, especially on the night of the Midsummer party.
King Edward I of England had a real fixation on fennel seeds and at the court they consumed about 2 kg per month, probably not only as a condiment but also as a hunger suppressant. A tradition brought to Europe by the Puritans who used to go to church with handkerchiefs in which some chewing seeds were wrapped to ward off hunger, during long religious ceremonies.
Today the main fennel producing countries are: India, Mexico, China and Iran, while the main user countries are both in Northern Europe and in the Middle and Far East.

Description –
Wild fennel is a spontaneous, perennial plant, with branched stem, up to 2 m high. It has leaves reminiscent of hay (hence the name foeniculum), green in color and produces umbrellas of small yellow flowers in summer, followed by the first green and then grayish fruits. Wild fennel uses buds, leaves, flowers and fruits, which are diakenes and which are improperly called “seeds”.
The picking of the wild fennel flower takes place in Italy as soon as the flower is “open”, normally from the middle of August until late September. The flower can be used fresh or dried, outdoors, in the light, but away from direct sunlight, which would evaporate essential oils. The diachenes can be harvested in early autumn, when the transformation of the flower into fruit took place. The “beards” or leaves and the tender buds can be picked from spring to late autumn.
Even if all parts of the fennel are used in this contribution, we only consider the dried fruits that make up the spice.
These are 4-8 mm long, thin and slightly curved, dark greenish-yellow in color. They have an aromatic odor, sweet similar to anise, flavor similar to anise but more delicate and intensity scale: 1.

Properties and Uses –
Thanks to these active ingredients, fennel seed infusions are one of the best remedies against problems related to digestive activity such as abdominal bloating and digestive difficulties, consequently making some improvements even in the case of vomiting, heaviness, aerophagia and drowsiness.
However, it should be remembered that these substances must absolutely not be taken in excessive doses since they could give rise to hallucinogenic side effects, therefore it is recommended to consume the decoctions of fennel seeds in moderation.
As for the use in phytotherapy, both dried fruits and essential oil are used.
The main use, as for similar plants green anise and caraway, is carminative, that is, it helps eliminate intestinal gases and simultaneously prevents their formation. Therefore it is used for those with digestive difficulties, flatulence or aerophagia.
It can be helpful in reducing the painful component of irritable bowel syndrome. Particularly suitable for breastfeeding because it is galactophore, i.e. it increases milk production, and at the same time prevents air colic in children.
In addition, fennel, diuretic, antiemetic, aromatic, antispasmodic, anti-inflammatory and liver tonic qualities have been recognized for fennel. Usually dried fruit in infusion is used, but freeze-dried sachets or essential oil can also be found on the market. The active ingredients contained in it at very high doses can have hallucinogenic effects, for example if concentrated in the essential oil extracted from the seeds.
The antioxidants found in fennel seeds can help reduce the risk of cancer associated with the damage caused by free radicals to cells and DNA. They are also considered an ally for the prevention of colon cancer, as they contribute, together with plant fibers, to the removal of toxins from the intestine, preserving their health.
Fennel seeds are a rich source of calcium, to be taken into consideration even if small quantities are consumed.
In addition, fennel seeds have a high copper content, a fundamental mineral for the formation of blood cells, with particular reference to red blood cells. 100 grams of fennel seeds contain 1067 milligrams of copper.
A warning relating to the high content of estragole (a carcinogenic molecule); INRAN (the Italian public body for food and nutrition research) advises against the use of fennel seeds in pregnant women, infants and children under the age of 4 and recommends moderation to adults.

Preparations –
Wild fennel, also called “finocchina” or “fennel” in the kitchen, uses fresh or dried flowers, fruits, improperly called “seeds”, which are more or less sweet, peppery or bitter, depending on the variety, the leaves (or “beard”) and twigs.
The latter, more or less large, are used in the Marche to cook the bombelli (sea snails) or to tan the olives in salt with chilli and garlic. Fresh and chopped leaves are used to flavor soups, fish dishes, salads and cheeses. In the “pasta with sardines”, a well-known Sicilian recipe, wild fennel leaves are one of the essential ingredients.
As for the fennel seeds in detail, these are considered a spice to be used in the kitchen to enrich our dishes with flavor and as ingredients in the home preparation of bread, crackers and breadsticks. They are also excellent for garnish pretzels.
Flowers are used to flavor boiled chestnuts, mushrooms in the oven or in a pan, pickled olives and pork, in particular the “porchetta” from Upper Lazio and Umbria. The so-called “seeds” are mainly used to flavor tarallini (Puglia), donuts or other homemade desserts and to spice hot wine or herbal teas. They are also part of the recipe for finocchino, a typical Piedmont biscuit. A “fennel liqueur” is used in the coastal regions of the Tyrrhenian Sea, for the preparation of which fresh flowers and / or “seeds” and leaves are used.
In particular, the seeds are used to flavor meat, especially pork and chicken, sausages and salami (finocchiona) but also fish; to flavor tarallini (Puglia), bread, donuts or other homemade desserts and to spice hot wine or herbal teas. They also enter the composition of the French blend Herbs of Provence. In England they are added to the court-bouillon to boil fish. Several liqueurs are flavored with fennel, including gin, absinthe and some spirits.
They are a component of the Chinese blend Five spices and Indian Punch phoron but are rarely used alone, in Asian cuisine.
The seeds can be added as is or can be roasted. In this case the flavor changes, it becomes more aromatic and less sweet. They can be pounded in a mortar. They can be replaced by anise seeds, using less of them than indicated in the recipe.