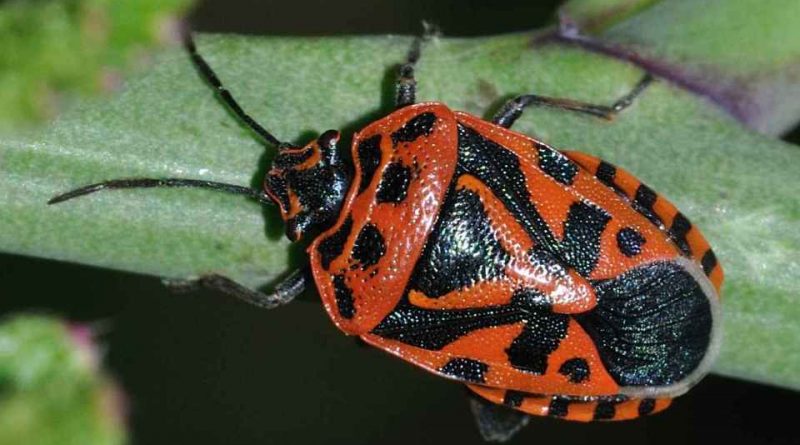 The cauliflower bug or cruciferous bug (Eurydema ventralis (Kolenati, 1846)) is an insect belonging to the Pentatomidae family.

Geographical Distribution and Habitat –
The cauliflower bug is an insect widespread throughout Italy, including the islands, where it lives in correspondence with Brassicaceae (Cruciferae) such as cabbage and cauliflower but in certain conditions also on potatoes and cereals.

Morphology –
Eurydema ventralis is an insect that is recognized to have a length of about 10 millimeters, showy, with a color livery, which is usually red with black spots, but can occur in some specimens with orange or yellow color.
It has a flattened body with elytra and hemielitre that have dark spots.
The head is rounded in shape and the cheeks are narrow.

Aptitude and biological cycle –
The biological cycle of Eurydema ventralis begins in the spring after the wintering phase that adults perform in winter shelters. Adults reappear and attack cabbage siliques in the spring period.
Upon reaching the first half of April, the mating phase begins, which is immediately followed by the laying of the eggs.
In the period of May the eggs hatch with the presence of the neanids that reach maturity in the month of June.
During the summer, adults lay the second generation of eggs, this time both on cruciferous plants and on other plants, such as rose, alfalfa, etc. and in July the eggs hatch, and the larvae mature in August.
At this point the second generation adults return to the crucifers and remain there until September and then take refuge in the winter shelters for wintering.
In this way, Eurydema ventralis turns two generations a year.
Juveniles and adults feed on the sap of the leaves and shoots causing their deterioration; they can also attack siliques, compromising their seeds. The affected young plants, in addition to slowing down their development, can also wilt and necrotize.

Ecological role –
The presence of the cauliflower bug on the plants can determine, with its trophic action, a general deterioration of the leaves and shoots, as it feeds on their sap.
In general, in correspondence with the stings of this insect, areas poor in chlorophyll are created, which become dry in a short time; moreover, if the insect bites are numerous and concentrated in a small area, the entire leaf flap withers and only the ribs remain green. In addition, bites in siliques can also cause seed abortion.
In the containment of this insect, consider that careful agroecology techniques must be adopted, such as efficient rotations, associations, elimination of herbicide treatments and when there is a decrease in the flora and fauna biodiversity.
Consider that Eurydema ventralis is kept at bay by some oophagous parasites including the Trissolcus simoni, which attacks the eggs of both the first and second generation.
For this reason, the use of chemicals should only be carried out in exceptional cases, advising natural macerates, with treatments to be carried out in the late afternoon.
Very often, nicotinic, lindane, toxaphene and phosphoric ester-based products have been used which, even if they seem to solve the problem at the moment, subsequently affect the agro-ecosystem with worse effects.
In general, as mentioned, large infestations can be prevented by practicing an adequate crop rotation and less specialization of crops.