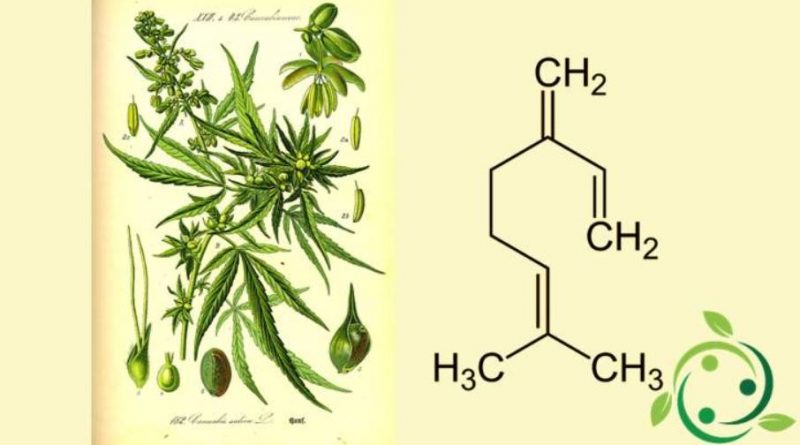 Myrcene or β-myrcene, whose term in the official IUPAC nomenclature is: 7-methyl-3-methylene-1,6-octadiene is a terpene with a brute or molecular formula: C10H16.
This terpene is found in the essential oil of many plants, such as: verbena, lemongrass, cannabis indica and myrtle but also in mango, hops, eucalyptus and others.
Myrcene is one of the most common terpenes in many cannabis strains. It has a fruity, citric, balsamic, pungent and spicy aroma like cloves, but there may be significant differences in the preparations. Together with limonene it is one of the most used terpenes for industrial purposes.
Myrcene is found at the base of many perfumes and in the biochemistry of plants it is a precursor of other terpenes. Its large presence in hops determines a large part of the aroma of beer.
Due to its pleasant smell it is sometimes used directly.
An isomer of β-myrcene is α-myrcene (2-methyl-6-methylene-1,7-octadiene) which, however, is not found in nature.

The term myrcene comes from the Myrcia sphaerocarpa, a plant native to the Amazon region where the root was used in tribal medicine. Following this traditional use, research is underway in Brazil on the anti-diabetic properties of myrcene. Essential oil with a high content of this terpene is used in natural therapies or as a supplement to drugs because, like β-caryophyllene, it has different therapeutic properties. It is primarily anti-inflammatory, sedative, analgesic, antispasmodic and then antibiotic and antiseptic. Its properties to contrast the genetic mutation of cells are under study, even if research indicates their carcinogenic potential.
Myrcene performs certain actions in the body that have not yet been fully explained. In cannabinoid therapies it is considered an enhancer of the effects of THC for its action on cell permeability which facilitates the transit of the active ingredient from blood to neuronal cells.
It also appears that this molecule increases the maximum saturation level of the CB1 receptor, allowing for greater assimilation by patients who require high dosages. In cannabis, indica dominant strains contain higher amounts of myrcene than sativa strains. This would partly explain the difference in sedative and analgesic effects.