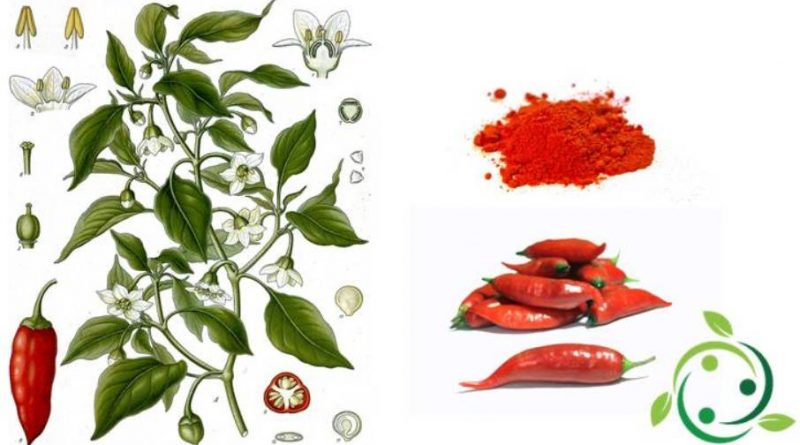 Chili pepper is a spice obtained from the berry of some spicy varieties of the Capsicum genus, and used mainly as a condiment.

Origins and History –
The chili pepper, whose scientific term comes from the Latin “Capsicum”, in turn derived from “capsa”, which means box, referring to the shape of the fruit (a berry) that resembles a box with seeds inside. according to some, the name derives from the Greek “Kapto” which means to bite, with evident reference to the spicy sensation that bites the tongue when eating.
However, according to some testimonies of archaeological finds, it is certain that already in 5500 BC, the chili pepper was known in the area of ​​present-day Mexico. As with many other products of the earth, man approached chilli pepper and discovered two properties:
– as a food preservative;
– as a therapeutic product, which made digesting better, it helped to overcome cold diseases, and was useful against rheumatic pains.
Subsequently, the use of spicy chillies, due to their ability to red-hot the mouth and therefore to give flavor to tasteless foods, became important as ingredients for flavoring the dishes.
The chili pepper arrived in Europe at the end of the 15th century thanks to C. Colombo who took it with his second trip. As soon as it was introduced it had an immediate success thanks to its easy acclimatization, becoming a “popular” and “fiery spice” aroma with which to replace expensive spices such as pepper, cinnamon, nutmeg.
The hot pepper, called in the Americas “chili” was renamed by the Westerners “hot pepper” for the taste that resembled that of pepper.
For the pre-Columbian peoples the chili pepper had aphrodisiac properties as it was able to set fire to the mouth and therefore inflame the passion. In this regard, it seems that the emperor Montezuma spent the days surrounded by his concubines consuming abundant quantities both in the food and in the chocolate drink. D’Annunzio the great poet, lover of poetry and beautiful women also mentions it in a poem (Ode al diavolicchio).
At the end of the 1500s the Jesuit José de Acosta, in his natural and moral history of the West Indies, reports that the chilli “has deplorable effects, because it is very hot, volatile and penetrating in nature and its repeated use is detrimental to the health of the bodies. of young people and even more to their soul, as it incites sensuality ”.
Furthermore, for its numerous therapeutic qualities, for some of its colors (red) and shapes (croissant), the pepper has always been attributed to superstitious functions. In the peasant tradition a necklace of chillies was hung around the house in order to keep negative spirits away. On some families, on the wedding day there was the use of giving parents to future spouses a chain of chillies as a symbol of mutual aid that would be guaranteed against the adversities of life.
The cultivation of chilli is mainly used in the gardens of some southern regions such as Calabria, Puglia, Basilicata, Abruzzo and Marche.
Obviously the number of chilli varieties is several hundred, combinable according to the degree of spiciness that is measured empirically through the Scoville scale (degrees from 0 to 10), which indicates the presence of a chemical component capable of stimulating heat receptors located on the tongue:
– high grade with meat;
– medium grade with pasta
– low grade but aromatic with fish and sweets.

Description –
The red chilli pepper is an annual plant belonging to the Solanaceae family, originally from the American continent, with erect stem, white flowers and oblong-shaped fruits that in the ripening phase change from green to yellow to bright red. The peculiarity of the fruit is the spiciness on the palate, a characteristic that is conferred on it by capsaicin, an alkaloid present inside it in varying concentrations depending on the species considered.
Examples of hot peppers are:
– for the Capsicum annuum species: cayenne pepper, jalapeño, serrano, thai, Calabrian pepper;
– for the Capsicum chinense species: the habanero, the Carolina reaper, the bhut jolokia;
– for the Capsicum frutescens species: tabasco.

Active principles –
The nutritional values ​​of the chili can vary according to the different varieties; the following values ​​are the average between the values ​​of a generic “red pepper” and a “green”, per 100 g of food:
– Carbohydrates 8.8-9.5 g;
– Proteins 1.9-2.0 g;
– Fat 0.2-0.4 g;
– Cholesterol 0 mg;
– Dietary fiber 34.8 g;
– Sodium 1640 mg;
– Energy value 40 kcal (167 kJ).
The fruit also contains vitamins (C, E, K, B, A), mineral salts including calcium, copper and potassium, carotenoids, bioflavonoids and lecithin. In particular, the chili pepper is rich in vitamin C: 100 grams of this spicy fruit contain 229 milligrams of it compared to 50 for orange.
The aforementioned values ​​are however highly variable depending on the variety, the form of farming, the type of soil and the quantity and quality of water adopted for irrigation.
However, the component that gives the pepper spiciness is capsaicin (also called capsicin or capseicin); a chemical compound present, in different concentrations. Together with dihydrocapsaicin, it is one of the alkaloids responsible for most of the “spiciness” of chilies, to which are added the other, less spicy capsaicinoids.
Capsaicin, which in the IUPAC nomenclature is: (E) -N- (4-hydroxy-3-methoxybenzyl) -8-methylnon-6-enamide, has brute or molecular formula: C18H27NO3 and molecular mass of 305.41 g / mol .

Preparations –
Chili can be eaten fresh in its less spicy varieties, adding it in salads, vegetable or legume dishes, while dried it can be added in small quantities in sauces, sauces, meats, vegetables and in general in all preparations.
In recent years, the habit of adding small quantities of chilli pepper to chocolate has also spread to enhance its taste and quality.
Cold peppers also prepare cold cuts, cheeses and excellent preserves.
To eliminate the burning sensation of the chili pepper from the mouth, it is better to eat a little breadcrumbs, drink milk or oily sauce or even alcoholic drinks. Water is not recommended because it increases the burning sensation.
As for the conservation, once dried, the chilli can be preserved whole, chopped or reduced to powder and must be kept in closed glass jars, away from heat and light.