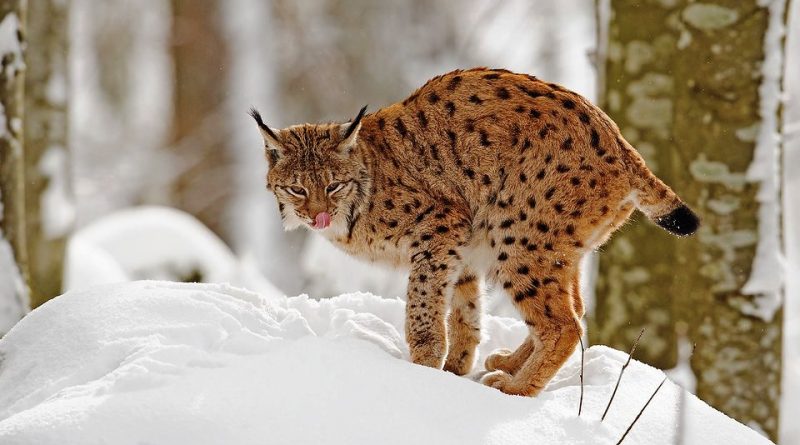 The Eurasian lynx (Lynx lynx Linnaeus, 1758) is a mammal belonging to the Felidae family.

Geographical Distribution and Habitat –
The Eurasian lynx is a feline that was once present throughout Europe. Since the mid-twentieth century, it has become extinct in many Central and Western European countries, but numerous reintroduction projects have been implemented.
In Italy, where it was considered extinct in many areas, it is present both in the western and eastern Alps and in the Apennines (especially central). According to some scholars, however, they tend to consider it the result of successful reintroductions beyond the Alps (France, Switzerland, ex Yugoslavia) – which would not explain the Apennine presence in any case – it is very likely that in reality very small relict nuclei of this feline, with a distinctly cryptic behavior, they could have been preserved in some particularly remote and segregated mountain areas, both in the western and eastern Alps and in the Apennines.
A total of 40-50 specimens are estimated in the Alps (almost all in the eastern Alps, between Veneto, Friuli-Venezia Giulia and Slovenia), while the estimated Apennine population is almost zero.
For other European countries it is present in France, where it had become extinct in the twentieth century but reintroduced in the Vosges and the Pyrenees. Present in the Vanoise National Park bordering the Italian Gran Paradiso park. Also present in several places near the border with Germany and the Netherlands
In Germany the lynx was exterminated in 1850 but was reintroduced to the Bavarian Forest and the Harz in the 1990s. In 2002 there was the first birth of lynx in German territory: a couple was born in the Harz National Park. Present in the Black Forest and in many areas on the border with Poland.
In Switzerland, where it had become extinct in 1915, it was reintroduced in 1971 into the Engadine National Park. Currently, around 160 specimens are estimated, also south of the Alps (Canton Ticino and Italian-speaking districts of the Canton Grisons). From Switzerland, lynx spread to Austria and Slovenia, where they had disappeared.
It is also present in Poland, with about 200 lynxes in the Białowieża Forest and in the Tatra Mountains and in the Carpathians where an estimated 2,200 lynxes are estimated in this mountain range, which extends from the Czech Republic to Romania; the largest lynx population west of the Russian border.
In Serbia, North Macedonia, Albania Greece and Kosovo and in the interior of Croatia an estimated 150 lynx are estimated.
In Scandinavia there are around 2500 lynxes between Norway, Sweden and Finland. Scandinavian lynxes were on the verge of extinction, but their numbers increased after protection. For this reason, hunting for lynx was once again legalized, albeit at certain times of the year
As for Russia, more than 60% of all Eurasian lynx live in the large Siberian forests. They are also distributed in other areas of Russia from the western borders, to the Caucasus up to the Pacific island of Sachalin.
It is also present in Central Asia, where the lynx is native to the Chinese provinces of Gansu, Qinghai, Sichuan and Shaanxi, as well as Mongolia, Kazakhstan, Uzbekistan, Turkmenistan, Kyrgyzstan and Tajikistan.
The habitat of this feline is that of wooded regions with a fairly harsh and rocky terrain where prey can be hidden and multiplied and there is therefore a greater possibility of finding animals to hunt. A rocky territory is also important in order to find refuge more easily during the winter or during the growing season of the puppies. 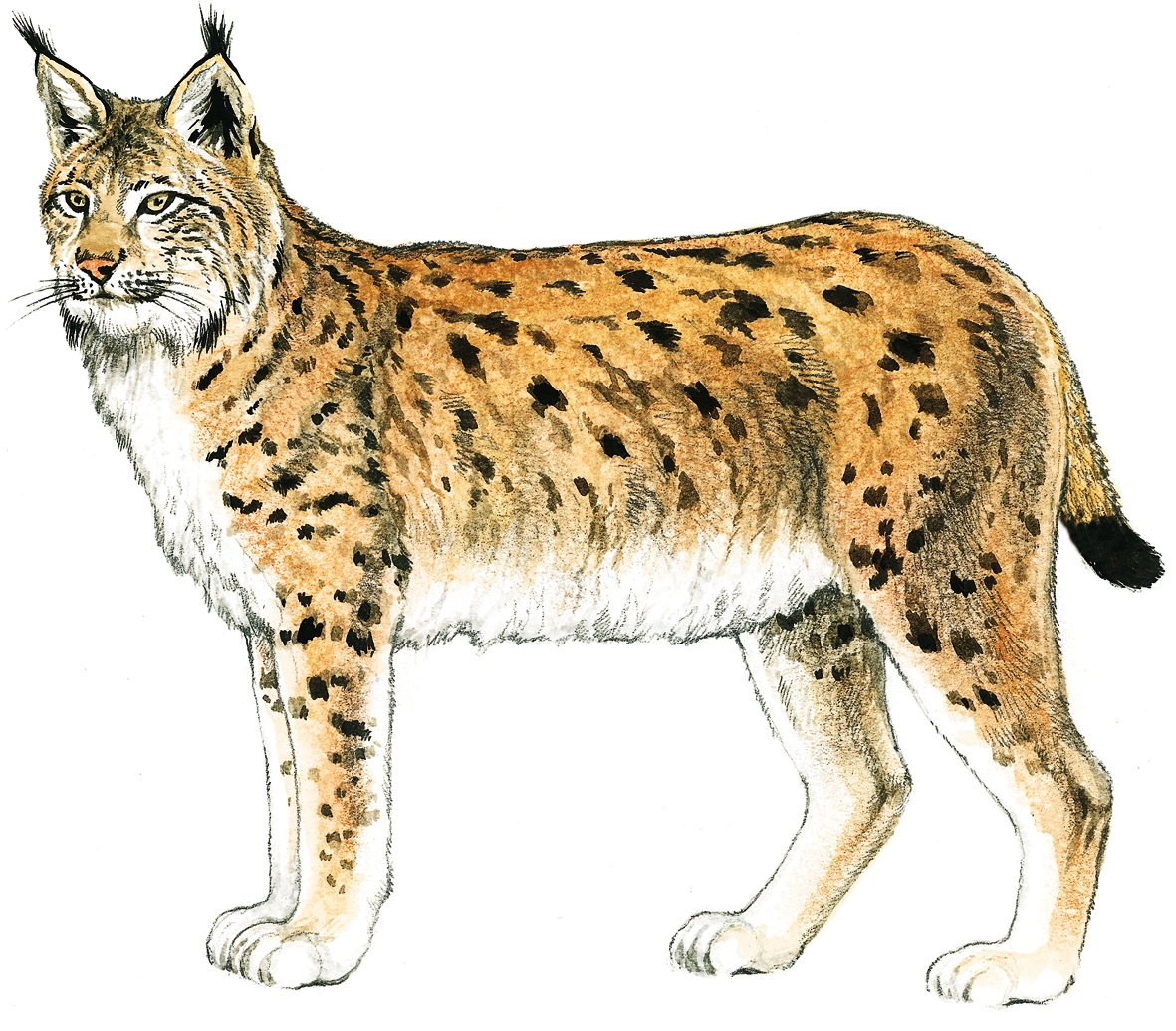 Description –
The Eurasian lynx is, in fact, the largest existing lynx species.
It has a long and soft hair, with a mainly yellow-dark brown coat, with black spots, but with a very variable color, going from a uniform dark gray to a reddish or dark yellow brown, with evident spots; the spotting is more or less extensive, according to the geographical breed, with straight ears with tufts of hair on the top and very long legs, equipped with sharp nails that are retracted during walking. The short is tail, rather squat, and ends with a black bar.
On the side of the muzzle are the tufts of hair on the cheeks which seem to form thick “sideburns”; also on the end of the ears there are two tufts of dark-colored hair 4-5 cm long.
The weight of this mammal ranges from 20 to 30 kilos (although some individuals reach larger sizes) and has a length of 100 – 130 cm. It has a height that is between 50 and 60 cm at the withers.
The Lynx has exceptional eyesight and hearing and is able to jump up to a height of 3 meters.

Biology –
The biological cycle of this feline begins with the mating season from December to March; during this period the male emits a particular lament to draw the attention of the females.
About two and a half months after mating (roughly between April and May), 1 to 4 puppies are born, already with fur but totally blind.
The definitive dentition develops during the first year of life and the canines, essential for hunting, appear last.
Since because of their slow growth the puppies cannot survive the first winter without the support of the mother, this goes hunting, leaving them in the burrows; only later will they begin to follow the mother to observe her movements.
The life of the average European lynx ranges from 10 to 15 years.

Ecological role –
The Lynx lynx is a solitary and shy animal, with exceptional sight and above all hearing and a relatively poorly developed sense of smell. It is very agile, it easily climbs trees. Thanks also to the long and powerful legs that allow the animal to make lightning jerks and then jump on the prey, its feeding is somewhat varied.
This animal preys mainly small or medium-sized animals such as hares, flies, rabbits, various rodents, foxes, birds, invertebrates and reptiles. It also attacks larger animals such as fallow deer, roe deer, mouflons and young deer and wild boar. Northern European lynxes attack reindeers and sometimes young specimens of moose, which can expose them to particular risks, except in the winter when the movements of these large preys are made more difficult by the snow.
The hunting moment almost always coincides with twilight, when the lynx, hidden in the thick of the vegetation, waits for the prey to arrive and then attacks it by surprise with a lightning leap, mostly to the throat or neck, in an attempt to kill it immediately.
Once captured, the prey is not consumed at one time by the lynx, which, if not disturbed, repeatedly returns to feed on it, taking care every time to hide the remains with foliage and various material.
From the point of view of territorial control, the lynx defends its area with determination and shows hostility against any predator who enters it to hunt, from the marten to the wolf which, however, being most of the times in a pack, manages to keep it at bay. These animals are used to mark the territory by urinating on shrubs or on tree trunks. A peculiarity is that the urine of the lynx crystallizes, giving off a strong smell. In addition to this marking system, lynxes are also used to scratch the bark of trees.
Even if the lynx, with its aggressiveness, keeps most of the predators away, in case of danger its great climbing skills protect it from danger.
In its range, the lynx competes with the wolf, which hunts its own prey. In general, wolves have the upper hand over the feline, since they live in packs, killing and devouring the specimens that fail to take refuge in the trees in time.
In the northern area of ​​Europe, another enemy of the lynx is the wolverine who, unlike the wolf, can also chase it in the trees. Wolverines, however, are not a great threat to adult lynx, due to their small size (unlike wolves).
Among the animals with which the European lynx is in competition we mention: martens, badgers, red foxes, golden jackals and wild cats with which, usually the clashes are resolved in favor of the lynx, bigger and stronger; in some areas it even controls their population density. In some areas of the Asian area, the lynx is prey to some larger cats such as leopards, snow leopards and Siberian tigers. Finally, lynx cubs, as well as these predators, can also fall victim to brown bears, golden eagles and eagle owls.
For the breadth of its range that goes from the Pyrenees, passing through Italy and Eastern Europe to the Siberian forests and the overall population, the IUCN Red List classifies the Lynx lynx as a low risk species.
In Italy the conservation of the Lynx is made particularly difficult by the very low densities that the species reaches even in favorable environmental conditions, and by the enormous spatial requirements, which render ineffective any conservation policy restricted to protected areas only (P. Genovesi in Spagnesi & Toso 1999 ). Listed in Appendix II, IV of the Habitats Directive (92/43 / EEC) and not huntable in Italy. Included in protected areas.
One of the reasons that often decreed the disappearance in some areas of this feline was precisely its hostile behavior towards food competitors of human breeding. In fact, more than one shepherd has not willingly accepted the death of one of his dogs, who naively ventured into the territory of a lynx.