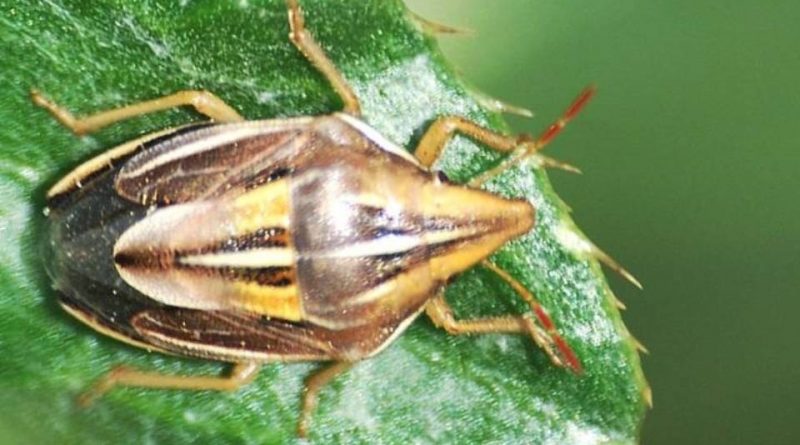 The wheat bug (Aelia rostrata Boheman, 1852) is an insect belonging to the Pentatomidae family.

Geographical Distribution and Habitat –
Wheat Bedbug is an insect that although it lives assiduously on grasses, and therefore in the areas where these crops are spread, it can also attack some vegetable plants and among these the pepper and tomato, on whose berries it causes the typical damage from “bug” similar to that of Nezara viridula. It occurs with greater intensity especially in milder climates.

Morphology –
The Aelia rostrata is a bedbug which, at the adult stage, is about 10 mm long and which has a triangular head and a yellowish livery with longitudinal brown lines, with a rostral-shaped mouthparts.
It is also recognized for the arrangement of the eggs which are laid in groups of 12 (two parallel rows of 6 elements).

Aptitude and biological cycle –
The wheat bug is an insect that winters as an adult in winter shelters until the beginning of spring especially under aromatic plants and later moves to wheat plantations.
Arriving in the spring, towards the month of April, the adult insect moves to the cultivated fields where it begins its trophic activity, sucking the sap of various plant species, with particular preference for wheat.
Subsequently, after reaching an optimal physiological balance it begins to mate.
The females lay their eggs after a short time on the leaves of the cereals, arranging the eggs in two rows, for a total of about 12 eggs.
After about two weeks, the nymphs shell and actively begin to feed by pricking the stems and leaves first, then the newly formed spikes.
This insect makes only one annual generation.
The damage on the wheat manifests itself on the ear with the formation of deformed, smaller kernels and with compromised germinability. The adult forms, together with the juvenile stages attack the leaves and the culms; causing the kernels to wrinkle with consequent unusability of the flour due to the chemical alteration caused by saliva, which gives the kernels an unpleasant taste.
Flours, obtained from attached wheat, cannot be marketed because of the unpleasant taste.
The greatest damages are reported in southern Italy and the islands.

Ecological role –
The Aelia rostrata is an insect that in conditions of good agricultural practices, consisting of good rotations, low use of nitric fertilizers, high varietal biodiversity of the fields and the presence of other plant species in the area does not cause particular damage.
Unfortunately, the advent of specialized agriculture has tampered with the eco-systemic balance and the biocoenosis of insects and wildlife systems.
The wheat bug is also kept at bay, if these balances are not tampered with, by parasitic Hymenoptera of the eggs and Larvevorid Diptera, which attack adults, and by a fungus of the genus Botrytis.
In general, the chemical fight against wheat bug is hardly ever carried out specifically; as a rule, this insect is controlled not only by parasitoids and fungi by treatments against aphids.
Only in exceptional cases, by assessing the consequences on the tampering of the eco systemic balances, the chemical check can be carried out in April with the arrival of the adults in the wheat fields, before the oviposition takes place, with specific products.