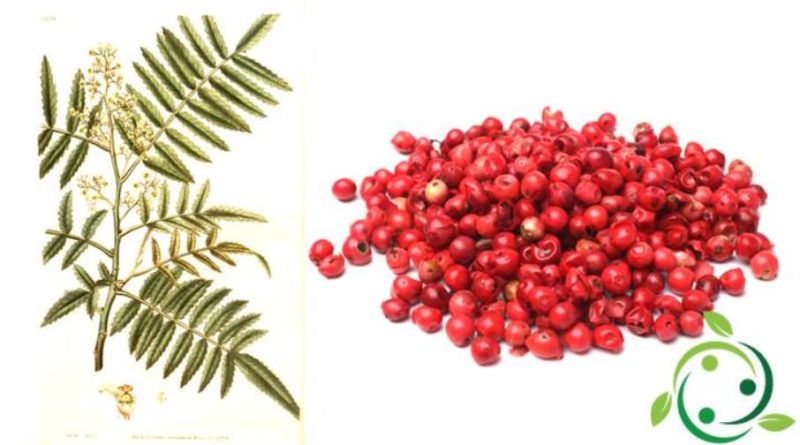 Pink pepper is a spice obtained from the berries of False pepper (Schinus molle L., 1753), an orginal plant of the highlands of the Andean countries.

Origins and History –
Pink pepper, whose dried berries are appreciated for their slightly spicy, delicate and aromatic taste, is, as mentioned, the fruit of the False pepper.
The plant and its uses are lost in the mists of time. It is depicted in religious statues and in idols of the native Amerindians of present-day Chile and over the centuries all parts of the plant (leaves, bark, fruits, seeds, resin) have been used for medicinal purposes by some population.
Garcilaso Inca de la Vega, a Peruvian writer surnamed El Inca, son of the Spanish conquistador Sebastián Garcilaso de la Vega y Vargas and an Inca princess, says: “Schinus molle is a panacea for the New World Indians who use berries to make a very good drink against urinary problems; a very good honey; a vinegar; a washing solution against scabies, a healing solution …… Wood is useful for curing toothache and gives excellent charcoal…. ”
In traditional medicine, Shinus molle was used to treat wounds and infections, thanks to its antiseptic power. It has also been used as an antidepressant and diuretic, and to relieve toothache, rheumatism and menstrual pain. It has also been speculated that the insecticidal properties of this plant make it a good candidate as an alternative to synthetic pesticides.
the spice, made from berries, like black pepper, can pleasantly enrich many dishes.

Description –
Pink pepper is a spice obtained from the small berries of Schinus molle, an evergreen, dioecious tree, usually 5 to 7 meters tall and equally wide, commonly known as pink pepper or fake pepper.
It is a tree native to the highlands of Bolivia, Peru, Chile which grows to medium size in our latitudes.
Cluster fruits are small spherical berries, first green and shiny and then of a beautiful intense pink color when ripe.
Since the berries have an aroma similar to that of pepper they are used as spices; the pink pepper. They can only be consumed in moderate quantities as they contain slightly toxic substances.

Active principles –
The pink pepper berries contain resins, tannin, and up to 10% of essential oils including pinene and limonene; they are also very rich in sugars and contain resins, tannin and gum-resins which have a purgative and anti-gout action.
On average 3 pink pepper berries contain 1 single kcal.
In detail, the pink pepper berries contain 22% of the fatty substance, but the quantity used in the recipes, even the richest in fake pepper, is always of little importance.
The fatty fraction of pink pepper is quite good and should have a positive effect on human metabolism. There is no lack of monounsaturated unsaturated fatty acids – omega 9 oleic acid – and polyunsaturated – omega 6 linoleic acid. Both, albeit in different ways, have a positive role in maintaining overall health.
Pink pepper also contains other nutritional factors, of which the most interesting could be polyphenols with antioxidant action. They too involved in maintaining the overall state of health, have a strong antioxidant and protective function of the metabolism.

Properties and Uses –
Pink pepper is a spice that promotes digestion since it is stomachic, tonic and stimulating. Due to its antiseptic power it has been used by folk medicine to treat wounds and infections. It also has diuretic properties and seems effective in the treatment of toothache, rheumatism and menstrual pain.
The fruit and leaves of Schinus molle, although apparently harmless to humans, can prove potentially poisonous to poultry, pigs and probably also to calves.
Pink pepper berries are sold both dried and in brine. Their appearance is that of a pepper grain but of a beautiful intense pink color. They have a weak fruity and slightly aromatic smell. The taste is sweet and aromatic, similar to juniper which can be a substitute even if less intense, with a very light taste of licorice, lemon and strawberry.
The intensity scale is 3.
Pink pepper often has a decorative function on the plate. But its flavor goes well with delicate dishes and without other spices, such as asparagus, peas, or artichokes, fish (Saint Jacques nuts, salmon) but also salads and fruit salads or desserts with yogurt, butter and mascarpone. It is excellent with goat cheeses and fresh cheeses. Ground with cumin, black pepper and thyme it is excellent for swordfish. A few berries on the foie gras gives it a special touch.
Enter the composition of the Creole mixture with white pepper, black pepper, green pepper and allspice. In Ecuador pink peppercorns are very popular as a condiment for dishes, but also for flavoring liqueurs and vinegar, in Chile they flavor wine, while in Mexico it is used in the preparation of pulque, a very ancient alcoholic drink considered sacred. try it also in desserts with strawberries such as ice cream or sorbet.
Since some cases of vomiting and diarrhea have occurred in young children after taking pink pepper, the Food and Drugs Administration (FDA) currently does not recognize the safety status (GRAS) of this food in the United States.
Above all, some varieties (especially those that grow wild in Florida) contain allergenic substances (irritating phenols) and therefore the use is not recommended for those who have inflammation of the gastric mucosa.
However, it is not always recommended to take them, in significant quantities, in case of:
– Specific allergy;
– serious gastro intestinal pathologies;
– liver failure;
– Kidney failure;
– drug therapies with which it could interact negatively;
– pregnancy;
– Feeding time.

Preparations –
For use in the kitchen, pink pepper must be purchased little by little to take full advantage of its aroma. Also it is advisable to check that the berries are easily squeezed between the fingers, to be sure of their freshness.
The pink pepper berries must be pounded or left to infuse in a little white wine, to be added at the end of cooking. But the best of their aroma is offered raw.
In general, pink pepper is perfect for flavoring fish dishes, but especially carpaccio of swordfish, tuna or salmon.
It is an excellent component of sauces based on yogurt, butter, mascarpone or fruit.
Its rich and bright color makes this pepper an excellent spice that gives elegance and liveliness to dishes, perfect for preparing original risotto or particular desserts. Pink pepper is, together with black, white and green pepper, one of the spices that make up the famous Creole blend.
In Ecuador pink peppercorns are very popular as a condiment for dishes but also for flavoring liqueurs and vinegar, in Chile they flavor wine, while in Mexico it is used in the preparation of pulque, a very ancient alcoholic drink considered sacred.
In Mexico it is called Anacahuita, while in the Andes plateau it is known as Quechua of Gualeguay.
To prepare a pink pepper sauce, to garnish dishes in an original way while flavoring them with the sweet fragrance of this spice, it is very simple: the ingredients are:
– 50gr of butter;
– 4 teaspoons of crushed pink pepper;
– 1 teaspoon of chili powder;
– 2 finely chopped dried tomatoes;
– 2 teaspoons of fresh cream.
Melt the butter in a saucepan and add pepper, chilli pepper and dried tomatoes. Cook a couple of minutes on low heat, stirring constantly and finally add the cream.
An immediate use of pink pepper is to butter good bread canapes to which you can add some crushed berries, to give a delicious taste.