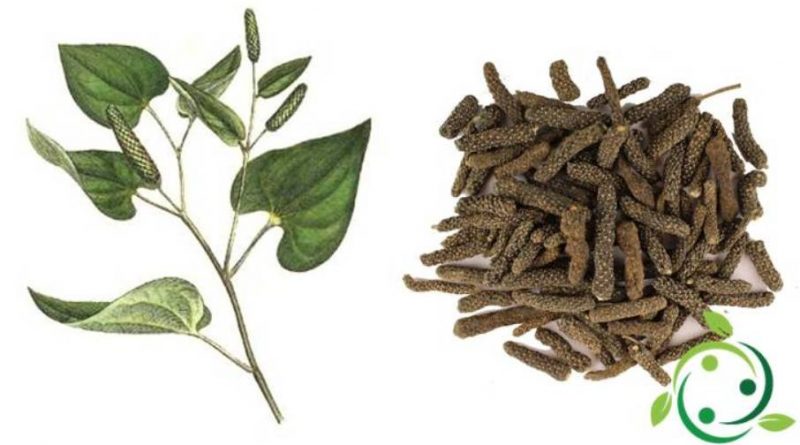 Long pepper is a spice obtained from the homonymous plant (Piper longum L.) using its whole or ground berries.

Origins and History –
Long pepper, also known as Balinese pepper, Bengal pepper, pippali, is a plant native to the Himalayas and is the oldest type of pepper that arrived in Europe from Asia. Ancient Indian texts, in Sanskrit, described the spice and its use in Ayurvedic medicine. He reached Greece around the fifth-sixth century BC: Hippocrates speaks of it in his writings as an effective medicine. Theophrastus, in his first botanical text, describes it clearly distinguishing it from black pepper. The Romans appreciated it very much and taxed it considering it a luxury. Even in the Middle Ages it was widely used; then, it was gradually replaced by black pepper and with the discovery of the American continent and chili pepper, it was also supplanted by the latter and disappeared from our tables.
Long pepper is more aromatic than the latter, it looks like a spikelet made of gray grains melted together.
Long pepper is used in Indian cuisine to prepare Indian achar (sweet and sour pickles), Ethiopian stews, the mixture of Tunisian and Moroccan spices called ras el-hanout. Traditional Indian and Chinese medicines give it many properties, including analgesic, warming and aphrodisiac properties.
The main producing countries of this spice are: India, Bangladesh and Sri Lanka.
The main user countries are: India, Indonesia and China where the plant is more known for medicinal uses than as a spice. Almost unknown in Europe.

Description –
The long pepper is a liana about 1-2 meters high, with numerous thin branches. The leaves are lanceolate and bright green on the upper side. The plant produces erect flowers all year round, grouped in oblong and tapered structures, which give long and narrow fruits (a kind of small panicles of 2-3 cm in length and 1 cm in diameter) which are collected before complete ripening and sun dried (the spice). After five years, the plant ages and needs to be replaced.
Long pepper is slightly spicier than black pepper and has a sweet and slightly acidic note. The smell is very fragrant, slightly reminiscent of incense and cinnamon, light similar to liquorice and black pepper.
To use it, it is recommended to cut it with a scissor to a length of half a centimeter and to grind it in a mortar or to grate it with a grater. In this way it can be used in the kitchen in a thousand ways.

Active principles –
Long pepper contains an alkaloid, piperine, considered the main active ingredient of this plant, with a concentration around 6%, much higher than that of black pepper. Instead, it only contains 1% of essential oils.
Among the essential oils, we mention pinene and limonene; furthermore they are pressing tannins, polysaccharides, proteins, minerals and glycosidic derivatives.

Properties and Uses –
The main properties of long pepper derive from piperine, which is formed during the fruit ripening process. The smell and the pungent or spicy taste of this spice derive from this substance.
It is a spice widely used in India, Indonesia and China, where it is used for both food and healing purposes.
Historically, some forest tribes of Malaysia used it as an ingredient to produce arrow poison.
In addition to the uses in the kitchen, long pepper is a plant that has curative peculiarities.
It has a vasodilator effect, stimulates the production of sperm and oocytes. In India it is used against bronchial asthma and muscle pain and, in Ayurvedic medicine, it is prescribed in association with other ingredients to treat gastric acidity. In China it is used against insomnia.
Long pepper can be found both as dried and ground fruits.

Preparations –
Long pepper, widely used in Asian countries, is very rare in Europe where, to find it, you can go to the best-stocked ethnic stores or the most qualified retailers on the internet.
In fact, it is little used in European cuisine, but very much in Asian and North African cuisine, reminiscent of black pepper, but it has a warmer and more aromatic taste. It goes very well with more delicate meats such as lamb and chicken and fish (in small quantities), with all vegetables: from tomatoes to courgettes, cauliflower, aubergines and cucumbers. Even rice and poor-tasting cereals can be flavored with long pepper.
In addition, this spice has the particularity of marrying very well with desserts: chocolate, sweetened milk, all fruit (from fruit salad to crumble, from jellies to jams). Delicious on fresh cheese or added to the velvety legumes. Enter the composition of curry and some marinades in India and Indonesia. Also enter the high quality ras-el-hanout next to the cubebe. It goes very well with lemongrass, vanilla, the four spice mixture and rhizomes such as ginger, galangal and turmeric.
This spice is used pounded, or chopped with your hands, or finely ground with a dedicated coffee grinder.
Like all peppercorns, it does not bear prolonged heat, better therefore to add it at the end of cooking, to preserve all its aromatic properties.
Also consider that to keep the pepper long it is good to place it in a cool, dry place, away from sunlight, in an airtight jar.
Long pepper is easy to use as it doesn’t break easily. Just take one and grate the desired amount with a spice grater.
To add it to pepper mixes you can roughly chop it with a knife and put it with the other spices in a spice grinder.
For broths, soups, sauces, soups and stews: add a long pepper, 15 minutes before the end of cooking, to the dish without boiling.