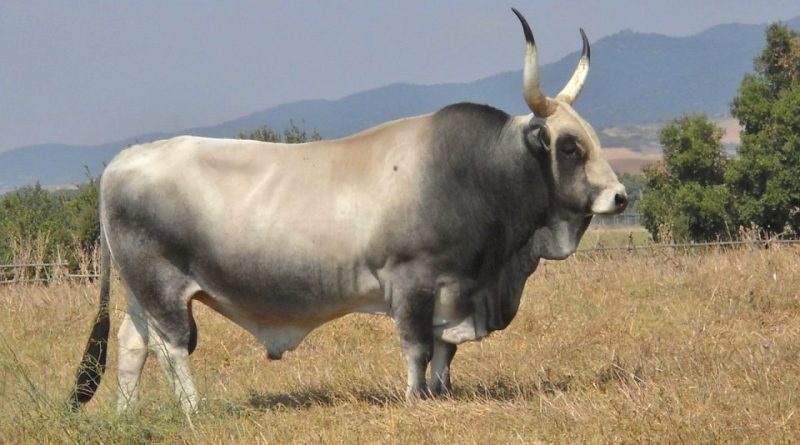 The Maremmana is an autochthonous bovine breed (Bos taurus Linnaeus, 1758) of Italy, bred in the areas between lower Tuscany and upper Lazio, with an aptitude for the production of meat.

Geographical and Area Distribution –
The Maremmana is a bovine breed bred in the pastures that stretch between low Tuscany and upper Lazio, close to the Grosseto and Viterbo coast, in the heart of the Maremma.

Origins and History –
The Maremmana is a bovine breed descended from the gray steppe or Podolica breed, therefore from Indo-European breeds that in past centuries, coming from Asia minor, crossed Eastern Europe and, once crossed the Alps and the Apennines, they settled in the current territories.
The genetic code of the Maremma cattle breed also has several traits common to those found in calves that have settled in the territories of the Hungarian puszta, demonstrating the common lineage.
It is a breed that has characterized the marshy areas of the Maremma for centuries and is particularly suitable for breeding in the wild in marginal environments.
In addition, the very sturdy size meant that many garments were exploited by man for work (the depictions in the paintings of the Macchiaioli and post-Macchiaioli of the late nineteenth and early twentieth centuries were characteristic).
Currently the consistency of this breed is about 40.00 heads, distributed between Lazio and Tuscany. Although the reduced use of animals for work has reduced the interest in this breed, in recent times the Maremma has attracted new interests from southern, Spanish and Central American breeders for its characteristics suitable for warm and hostile environments, but also for the recent introduction of organic farms.
The Maremma breed book was established in 1935 and the National Association of Italian Cattle Breeders Meat A.N.A.B.I.C. since 1966 he has been managing the genealogical books of the Italian white breeds (Chianina, Romagnola, Marchigiana, Maremmana, Podolica).

Morphology –
The Maremmana has a gray coat, which is darker in males and lighter in females; the young are born in the Fomentian area and acquire the typical color around 4-6 months of age.
The pigmentation of muzzle, eyelashes, tongue, palate, mucous membranes of the vulva and anus, tip of the tail, tassel, claws, bottom of the scrotum, pissular and tip of the horns, is slate colored.
The horns are from 70 to 100 cm long, with a characteristic shape which are half-moon in males and lyre-shaped in females.
These are animals with an imposing skeletal development that gives an aspect of great solidity and robustness, made majestic by the development of the front train with a large, high and deep chest.
The neck is short and muscular with abundant straw.
The trunk is long and deep with a highly developed thoracic spine, the back and the rectilinear and muscular loins.
The croup is broad, long and muscular, tending towards a square shape; extremely solid limbs, claws of exceptional hardness, often perfect spines.
The cows have a well-shaped udder that allows them to provide an abundant milk production (10-12 l) which ensures a 1 kg calf daily growth.
They are long-lived and rustic cattle (they reach 15-16 years of age), but economically late as they weigh only 350-440 kg at 18 months (instead of 600 kg), while as adults the bulls weigh 700-1200 kg and the cows 600-700 Kg.
The size at the withers is approximately 170 cm.

Productive attitude –
The Maremmana is a bovine breed bred in the pastures with a low maintenance cost since its diet includes very poor fodder such as the marsh straw. It is also a rustic and frugal breed, resistant to disease and climatic difficulties. The characteristic light color between off-white and gray has always protected cattle from the heat and sun, impossible to escape in the open Maremma meadows.
These cattle graze freely in the wild and are controlled and followed in their movements by the cowboys riding their inseparable Maremma horse; the pastures arise mainly on saline substrates due to the presence in the past centuries of marshy areas now reclaimed. The spontaneous herbs that grow on these soils are the favorite food of the animals and it is thanks to their nutrition that the Maremma breed beef has very intense flavor characteristics on the palate which is accompanied by a high protein content and a moderate lipidic presence , with an excellent balance between saturated and unsaturated fatty acids. All this means that this food is in great demand by gourmets and, at the same time, it is recommended for anemic subjects and in high-protein and low-lipid diets.
In order to improve the good aptitude for meat production and exploit the good use of grazing and lactation of cows, crossbreeding with bulls of specialized meat breeds (Charolais and Chianina) takes place.
Once the Maremma breed meat was not in great demand, due to the high costs due to the particular type of breeding and the low meat yield.
However, from the nineties onwards, with the BSE (bovine spongiform encephalopathy) emergency that has affected many European countries, including Italy, it has led to a greater enhancement and a significant increase in requests on the market of Maremma meat, coming from cattle bred in the wild (in which the presence of the disease has never been found).
The provisions of the law which came into force at national and European level between 1 April 2001 and 31 December 2005 did not spare the Maremma breed leaders either by requiring the removal of the vertebral column with the spinal cord in slaughter.