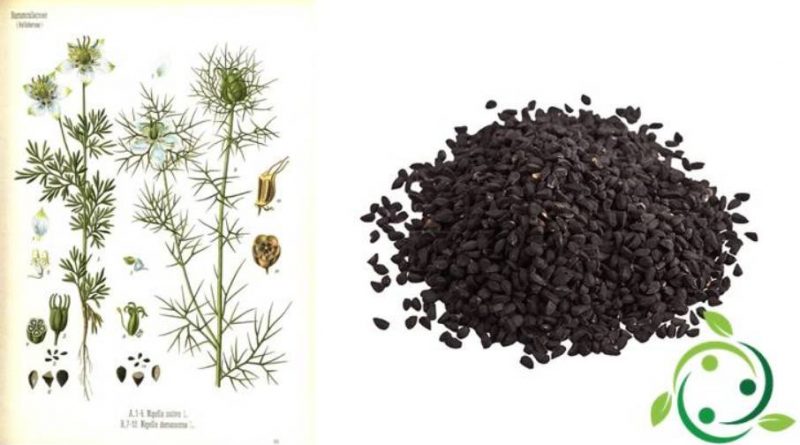 Origins and History –
The name nigella derives from the Latin niger, black, due to the color of the seeds, from which the improper name of black cumin is then derived.
This spice, also for its great diffusion is known with many terms, which make it confuse with other spices: black cumin, black seed, fennel flower, nutmeg flower, Roman coriander, black onion seed, black sesame or wheat black.
Nigella is a plant known since ancient times. It was known and appreciated already in antiquity: a Hittite find dating back to around 1650 BC. revealed remains of honey and nigella seeds. It was also particularly appreciated by the ancient Egyptians, as evidenced by the seeds found in various archaeological sites, including the finds in the tomb of the pharaoh Tutankhamun where amphorae filled with nigella oil were found.
Although their function in Egyptian culture is unknown, these findings tell us that the seeds and oil of the plant had to play an important role if selected to accompany the pharaoh after life.
The first finding with reference to Nigella sativa is found in the book of Isaiah in the Old Testament, where the prophet contrasts the cultivation of nigella and cumin (typical Egyptian crops), highlighting the cultivation of wheat (Isaiah 28: 25, 27).
Furthermore, it is known that this spice was used as a medicine in ancient Greece, for the treatment of intestinal and genital tract disorders.
In medieval times Charlemagne indicated the plant as one of those indispensable in the garden. The Arab tradition called the seeds of the nigella “blessed seeds” following both the indication of the Prophet Muhammad, who advised to always use them since they treated all diseases except death, and the research of scholars such as Avicenna (Ibn Sina) in the “Canon della Medicina ”, which they claimed as black wheat seeds had the property of stimulating body energy.
The Arab peoples, in fact, have always called the nigella habbatul barakah, that is, seeds blessed for its numerous healing properties.
More recently scientific studies have confirmed the therapeutic value attributed to the plant; it is even recognized as the power of “immune system regulator”, useful for fighting degenerative diseases.
In Middle Eastern cuisine, after fast toasting that enhances its bitter and pungent flavor (vaguely reminiscent of oregano), nigella is used in recipes for traditional desserts or biscuits, to flavor and cover particular types of bread, or as a decoration in salads. .
The producing countries go mainly from Egypt to India where it also grows in the wild.
The main user countries are Turkey, Lebanon and Iran, but also in southern and central Asia. Instead, it is little used in the West.

Description –
Nigella sativa is an annual shrub, originating, probably from western Asia, with about 50 cm long stems, small thin and filiform leaves, white flowers with blue veins with 5 petals, which bloom between June and September, inside they contain a capsule that when ripe opens and disperses the seeds.
The seeds are very small black with a slightly pyramidal shape and have a slight smell of oregano, sometimes similar to caraway, which is accentuated by grinding them.
They have an aromatic, slightly bitter, pungent flavor if the seeds are immature or not well dried and with an intensity scale: 3.
The seed is used as a spice. It has a bitter and pungent taste with a faint strawberry smell.
It is mainly used for the preparation of liqueurs, candies and sweets in general. In Middle Eastern cuisine it finds its place in the recipes of typical sweets and traditional biscuits; often it is also used to flavor and cover particular types of bread (the variety of naan bread called Peshawari naan), or as a decoration in salads. Nigella oil is used in the United States as a dietary supplement and can also be safely eaten on bread. It is the main ingredient of a cola-flavored drink: Evoca Cola

Active principles –
Black caraway is a spice rich in vitamins A, B, D, B1, B2, B6 and B12 and amino acids, including nine essential amino acids, but it also contains proteins and mineral salts, such as zinc, sodium, potassium, calcium, iron, magnesium and selenium.
From a quantitative point of view it contains about 345 calories for every 100 grams of product. Always taking into consideration this quantity, inside we find 15 grams of fat, 0.5 grams of saturated fatty acids, 1.7 grams of polyunsaturated fatty acids, 10 grams of monounsaturated fatty acids.
We also find carbohydrates (about 53 grams), dietary fiber.
It is also rich in antioxidants, alkaloids, essential oils (up to 1.5%) and omega-6 unsaturated fatty acids, which fight free radicals, responsible for oxidative damage to cells which, in addition to aging the epidermis , predispose to diseases such as cancer, diabetes and heart disease.
It also contains both melantine and, in high doses, it is toxic, and niugellina which is paralyzing.

Properties and Uses –
Black caraway uses both seeds and oil.
The oil extracted from nigella seeds has always been used to successfully treat dermatitis, sunburn and eczema.
In Indian medicine the seeds of nigella sativa are used as antiasthmatics. The plant has a dual activity: antihistamine and vasoregulator. The infusion was used against meteorism, in catarrhal conditions, to promote menstrual flow and dysmenorrhea. The diuretic action also helps to limit premenstrual water retention. It appears to be a strong pesticide against intestinal parasites.
In India they use it to provoke uterine contractions after childbirth and encourage lactation.
Recent clinical studies seem to demonstrate the activity of Nigella sativa oil in various allergic conditions such as rhinitis, asthma, atopic eczema.
In northern India it is used for vegetable dishes, especially eggplant and pumpkin to which it gives a very pleasant aroma. Enter the composition of punch phoran, an Indian mixture of 5 spices (nigella, fenugreek, cumin, black mustard, fennel in equal parts) used for meat and fish. In many countries it is added to bread. Try to spread it on a simple salad.
Among other uses, it is interesting to note that nigella seeds have insect repellent properties and can be used as a mothproof. But it is also useful for acne skin and for strengthening hair.
Among the warnings, it should be remembered that nigella has among its constituents melantine which, as mentioned, is toxic at high doses and niugellina which is paralyzing. Therefore the spice should be used in moderation.

Preparations –
For the retrieval of Black caraway seeds and oil, please note that they are also quite easily available in supermarkets; however, it is important that the seeds must be intact and shiny.
For their use, the seeds best release their aroma after a short toasting (without seasonings) or fried with a little oil. They are easily crushed in a mortar.
In the kitchen, moreover, nigella goes well with coriander and allspice.